Tyler Perry must think I’m Boo-Boo the Fool; there’s no way I’m going to believe that “A Madea Family Funeral” is his signature character’s swan song. Mabel Simmons, the notoriously tall, slap-happy and occasionally blasphemous older woman whom Perry has portrayed on stage and screen for decades will not go gentle into that good night. Madea’s fan base will simply not allow it, and the one consistent thing about Tyler Perry is that he loves to give his fans what they want. He does this for better, and more often than not, for worse. And since Madea is the coordinator of the title event rather than the subject, she’s free to appear in more movies. Which she will. I’m confident enough to be your bookie for bets on her return.

While you’re sending in your wagers, I should inform you that Madea’s last hurrah is Perry’s best film since his most dramatically successful “I Can Do Bad All By Myself.” It’s fitting that he’d take on this particular staple of church life because, like Black Baptist funerals, Tyler Perry movies are simply too damn long. “A Madea Family Funeral” milks some very funny moments out of how Black people prepare and attend homegoing services. Dressed in a gigantic black church hat that looks borrowed from the Wicked Witch of the West’s more fashionable closet, Madea runs the funeral like the orchestra at the Oscars. “Two minutes!” she yells at everyone who takes the pulpit to speak on the dead, and she violently yanks all violators offstage. Despite all that, the funeral still takes 9 hours.

There are also jokes about how long it takes for Black folks to schedule funerals. Much is made of how quickly Vianne (Jen Harper) wants to inter her husband, Anthony (Derek Morgan). Madea is only given two days to pull it all together, inspiring numerous complaints from her family. In typical Tyler Perry fashion, this brood is filled to the brim with secrets and drama, allowing for the seismic shift in tone we’ve come to expect in his films. It work better here than usual, probably because the broad humor is meaner and darker than you may expect. The drama seems to co-exist more peacefully with the comedy here. Plus, Perry’s script has a blistering monologue for Vianne that Harper delivers with show-stopping gusto.

“A Madea Family Funeral” brings to the forefront—and mocks—the unspoken reason why we’re told not to speak ill of the dead: Sometimes the person in the casket is a ripe bastard who deserves to be sent to Hell floating on a sea of truthful descriptions of their character. And yet, decorum must be kept. Of course, Madea is pure id, so she can’t resist taking her swipes at respectability. Of the suspiciously large number of unknown women who showed up, she asks “if you knew the deceased, raise your hand.” After everyone raises their hands, she adds “if you knew the deceased in the Biblical sense, raise your hands.” The same amount of hands go up.

The deceased was a major league ho whose Viagra intake lasts long after he’s shuffled off this mortal coil. In fact, almost everyone in this movie is whoring. Anthony has a heart attack during a wild S&M sex session between him and Vianne’s best friend, an event overheard and eventually witnessed by A.J. (Courtney Burrell) and Gia (Aeriél Miranda). Gia and A.J. were in the next hotel room carrying on an affair of their own. We learn that Gia is the fiancée of A.J.’s brother Jessie (Rome Flynn) and that A.J. is married to a doormat he walks all over for most of the picture. This sets up the central drama that Perry keeps returning to whenever he veers away from the comedy.

A.J.’s the type of guy Madea usually pulls her pistol on in these movies, but this time, she saves all her venom for her usual cronies Hattie (Patrice Lovely), Aunt Bam (Cassi Davis) and her brother Joe (Tyler Perry). They are also at the hotel when Anthony’s affair is discovered, viewing him donned in S&M gear and full arousal. (Hattie’s reaction to this is shockingly dirty.) Madea tries to keep this secret from Vianne, but her crew can’t keep quiet. Madea resorts to slapping the hell out of them whenever their mouths get too busy, going so far as to knock the dentures out of Joe’s mouth and force Hattie to utter words that guarantee a PG-13 if not an R. I should be ashamed of myself, but I laughed my ass off every time she hit somebody.

As if he weren’t doing enough onscreen already, Perry plays another character named Heathrow. Heathrow is in a wheelchair, has lost both his legs and needs an artificial voice box to speak due to his throat cancer. Heathrow also has half a jHeri curl and all the activator-related messiness that comes with it. This is the most lowbrow character Perry has given us, and your mileage may vary on whether you find him offensive. I found him completely extraneous, but I did laugh when Madea said the vibrations from his voice could give her an orgasm. I know, I know. Bad Odie. But if you were expecting polite humor, you’re in the wrong theater.

“Completely extraneous” is how I can also describe several scenes in this movie, especially one where Madea and company are stopped by the cops. It starts out promising, with the cop freaking out at a car full of Black people, but it goes nowhere and feels interminable. And that’s always been Perry’s problem. At 102 minutes, “A Madea Family Funeral” overstays its welcome. If his films clocked in at about 80 minutes, they’d play better. There’s always the feeling that his movies are spinning their wheels to make some kind of running time quota. Things that are this tasteless need to move faster.

No matter. I cop to laughing out loud numerous times, and I was captivated by Vianne’s big “what’s good for the goose” style speech at the end. If “A Madea Family Funeral” is indeed the final “Hallelu-YUHRR” for Madea, it’s not that shabby an exit. You might not miss her, but it feels like she exited the scene on her own terms. For better and for worse. 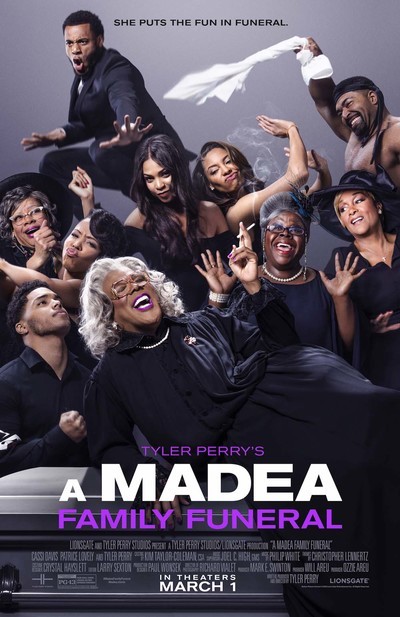 David Otunga as Will