The opening sequence of "Tumbledown," drenched in the golden light of memory, complete with bittersweet voiceover, places the film in Nicholas-Sparks-Land. The music is sad, Rebecca Hall sits at a laptop, typing the words she says in voiceover. Director Sean Mewshaw and cinematographer Seamus Tierney pour it on. "Tumbledown" is far more complex than the opening would suggest; the U-Turn in tone is drastic. Considering the fact that "Tumbledown" is about, in many ways, how to construct a narrative, and who gets to shape a narrative, the opening can be seen as a self-aware joke. You may think you know what you are about to see when you watch that opening, but you would be wrong. It's great to be wrong.

"Tumbledown" (with script by Mewshaw and his wife Desiree Van Til) is about a young grieving widow named Hannah (Rebecca Hall). Her husband, Hunter Miles, had recorded only one album in a makeshift studio behind their house in Maine. That album became a cult classic, and then he died suddenly, after falling into a ravine. Hunter Miles is imagined along the lines of Nick Drake, Elliott Smith, Jeff Buckley—men who died too soon, whose songs continue to influence. (The soundtrack for "Tumbledown" is filled with what is meant to be Hunter's songs, composed and sang by musician Damien Jurado, with a high eerie voice reminiscent of Bon Iver's.) Hunter Miles' fans make pilgrimages to Maine to visit his grave. The wall of the ravine where Hunter fell is covered in scratched messages from fans. They hunger for more from him but have to be satisfied with what they got, only 12 songs.

Hannah is furious at the speculation that Hunter was a member of the 27 Club, that he committed suicide. She is working on a biography of him, and refuses to speak to the press who hound her for more information about him. Her attitude is reminiscent of Ted Hughes' poem "The Dogs Are Eating Your Mother," addressed to the two children he had with wife Sylvia Plath (who, of course, committed suicide in 1963). Hughes describes the ravenous Plath scholars as dogs ripping apart her corpse, and warns his children:

And they will tear you down

As if you were more her.

They will find you every bit

As succulent as she is."

Hannah, as protector, has experienced what Hughes described. But then Andrew McDonnell (Jason Sudeikis) arrives. He's a pop culture studies professor, working on a book about young dead rock stars and Hunter Miles will be the most important chapter. Andrew wants access to Hunter's rough drafts, journals, letters, but Hannah won't return his calls. To Hannah, Andrew is just one of the dogs eating the corpse of her husband. Andrew travels up to Maine from New York City to track her down. They get off to a rocky start, but when she reads one of McDonell's chapter drafts she responds to his sensitive prose. Reluctantly, she agrees to a partnership and McDonnell moves into the house.

The script is a bit wordy, with some of the lines sounding like words on the page, but overall, the dialogue is smart and funny. There are a couple of different tones established, with varying degrees of success. There's a City-Mouse/Country-Mouse narrative. Hannah, who grew up in Maine, rolls her eyes at city-boy Andrew's car that can't maneuver in a snowstorm. Andrew is unconsciously snobby, expressing surprise when he learns that the flannel-wearing Hannah has a PhD. There's also the Hate at First Sight device, Andrew and Hannah's first conversation consisting of hurling insults at one another across the table. These formulaic devices are sometimes telegraphed too clearly, making the conflicts obedient rather than organic, but the story has strength and surprise in it. The characters are all tough, verbose and self-protective. It takes time for anyone to show their cards, let alone their heart.

There are other characters who breeze in and out. Andrew McDonnell's music-industry girlfriend (Dianna Agron) has a vested interest in her boyfriend's research. Joe Manganiello plays Hannah's local "friend with benefits," who looks at Andrew, the City Mouse interloper, with open contempt. Blythe Danner and Richard Masur play Hannah's parents, worried that their daughter will spend her life making monuments to her dead husband. Griffin Dunne plays Hannah's friend in town, the only person in the movie not intimidated by her often ferocious behavior.

Cinematographer Seamus Tierney captures the wintry grandeur of Maine's mountains and frozen lakes and icy woods. His work helps root "Tumbledown" in its landscape so much that when there are scenes in Manhattan, the city looks like a futuristic nightmare. Tierney's cinematography provides the answer to one of the ongoing questions about the life of Hunter Miles: Why did he hide out in Maine? Well, look at that scenery. That's why.

Rebecca Hall does not play Hannah as a tear-soaked martyr. Hannah is more like an avenging angel, hovering over the fragile flame of her husband's reputation. Hall's Hannah is freckled and athletic, dressed in parkas and hiking boots, careening her pick-up truck along icy roads: a totally believable Maine girl. You can't picture Hannah in a city. She owns maybe one pair of heels, if that. She's tough, she's capable. She's also a nightmare to anyone who loves her.

Jason Sudeikis comes from a place of sincere decency in the role of Andrew. It's difficult for actors to make decency interesting. Jimmy Stewart could do it. And Sudeikis does it. Andrew doesn't behave well always, but he's not a creep. "Tumbledown" is not the story of a cynical urbanite who opens his heart in the country. Andrew's decency helps make the movie. Sudeikis is touchingly open, transparent, really, throughout. He's drawn to Hannah. Because she is the widow of his idol? Because she holds the key to the secrets he wants? Or is it ... more than that? Sudeikis plays Andrew as a man struggling with all of that on a moment to moment basis. Even he is not sure what is going on.

This is Sean Mewshaw's first feature. He nails the atmosphere of small-town Maine (snowshoes on the wall, random power outages, the hearty individualism of the people). The characters are believably complex. (Even Andrew's city-slicker girlfriend ends up having a blast at the "maple syrup barn party" when she comes to visit.) Hall and Sudeikis circle around one another warily, erupting into defensiveness, shutting each other out, then letting each other back in. There's a rhythm to it. Mewshaw helps sustain that rhythm.

Once the full story unfolds, the opening sequence, so seemingly out of tune with the rest, looks like what it actually is: an effective feint. Who owns the story of Hunter Miles? Who is the best one to tell it? If a person leaves behind only 12 songs, how is the life to be analyzed? Can you make assumptions about an artist's mindset from his lyrics? Andrew feels he knows Hunter through his songs; this leads him into errors, like informing Hannah's dad that Hunter probably didn't fall into that ravine (judging from his lyrics, isn't it obvious he jumped?) But is every song a form of autobiographical confession? (A.S. Byatt's novel "Possession" is all about the confusion of modern-day historians trying to piece together an incomplete record.) There are some slapstick sequences in "Tumbledown," and familiar elements from wacky rom-coms, but the film, at its best (and it gets better and better as it goes along) is about two people struggling to control not only Hunter's narrative, but their own. You're never sure which way it's going to go. And how great is that? 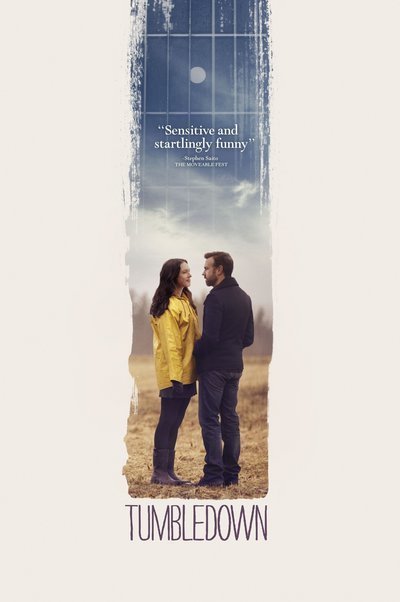 Rated R for a sex scene.