Armenian-American musician Serj Tankian celebrates himself in “Truth to Power,” a new documentary about the Nu-metal band System of a Down’s frontman, composer, and lyricist turned activist, composer, and painter. To be fair, there’s a fair bit to celebrate, especially when it comes to Tankian’s successful attempts at fundraising and generally raising global awareness for the Armenian genocide of 1915. But “Truth to Power” often focuses so much on Tankian’s perspective that crucial, or maybe just convincing musical performances are omitted in favor of self-aggrandizing talking heads interview footage, most of it with Tankian, who produced “Truth to Power” with his Serjical Strike production company. This, unfortunately, also makes sense given that Serjical Strike has released only five albums in the last 11+ years, and all of them are composed and/or performed by Serj Tankian.

Still, Tankian has faced a lot of criticism from headbanging fans since System of a Down hasn’t produced a new LP-length record after winning a Grammy in 2006. So it stands to reason that a documentary like “Truth to Power” should focus on what Tankian has been up to in the intervening years, since he seems convinced that System of a Down is only as good as their ability to raise fans’ political consciousness.

Tankian’s probably right to suggest that System of a Down’s 2015 Armenian concert was a symbolic peak for the band. But it’s hard to tell, based on the evidence presented in “Truth to Power,” if he and writer/director Gavin Hovannisian (“1915”) are right to suggest that that concert was a major influence on Armenian Prime Minister Nikol Pashinyan’s election during the historic 2018 elections. Mostly because we don’t hear Pashinyan elaborate on that theory: Tankian paraphrases him, and Hovannisian supports his star’s testimony with a brief clip of Pashinyan acknowledging that he attended and felt inspired by System of a Down’s concert. Great, but what if Pashinyan’s just being nice to a rock star for an on-camera interview, and why is Tankian the only System of a Down band member whose contributions are celebrated?

The obvious answer is one that Havannisian never addresses beyond some vague on-camera comments from System of a Down drummer John Dolmayan: Tankian and his bandmates don’t agree about much these days, which probably explains why vocalist/songwriter/guitarist Daron Malakian is barely in “Truth to Power,” not even during archival concert footage. Even though Malakian gave System of a Down its name.

“Truth to Power” is often irritating because only Tankian’s perspective seems to matter, and it’s often expressed through interview footage of him, presented in profile, talking into negative space about little things like the “commercially motivated” concept of “bands staying together” or about "moving the goal posts" of what could "be discussed in popular music.” "I don't want to come across that I know everything,” Tankian says, his head surrounded by stock footage of exploding mushroom clouds. But: “whatever statement I make is based on an injustice occurring somewhere that I want to rectify.” I wonder if this hyperbolic generalization can be applied to the scene where Tankian reads a bunch of random internet posts from alienated fanboys, like this one guy who claims to represent “the entire metal community.” What injustice did that guy commit, beyond mouthing off online?

Hovannisian's documentary would be much more convincing if he picked a single aspect of Tankian’s activism—or composing, or personality—and considered it in greater detail. Even System of a Down’s 2015 Armenian concert feels like an afterthought, even though it’s presented as an answer to a loaded-for-bear question that Hovannisian asks Tankian in an interview that begins and ends the movie: “Can music change the world?” I mean, sure, but could you maybe show more illustrative footage from that 2015 concert? Or bring it up again some time before the 50-minute mark of this 80-minute documentary?

Never mind the fact that neither Malakian nor Tankian have made an across-the-board good album with their respective post-System of a Down bands (Malakian has come closest with Scars On Broadway, but even that band can’t touch System’s lesser efforts). If Tankian wants viewers to take seriously the notion that “as you grow as an artist, you have more to give,” then it would probably help to get into the details of what makes his post-System of a Down activities an essential step forward for him, let alone his art/work. I don’t see that in “Truth to Power,” and it’s not for want of trying.

Now playing in select theaters and in virtual cinemas. 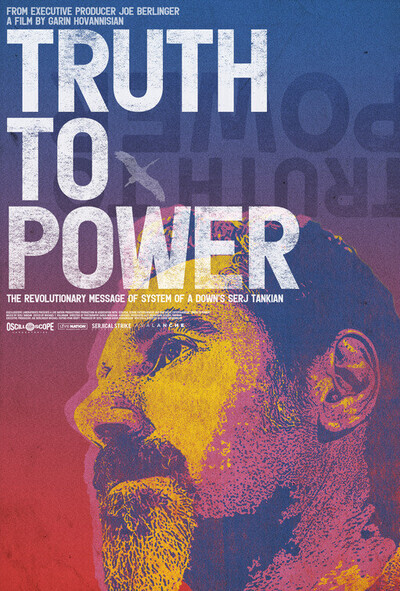 Serj Tankian as Self

John Dolmayan as Self

Shavo Odadjian as Self

David "Beno" Benveniste as Self

Tom Morello as Self

Rick Rubin as Self