"Kick-Ass 2" is one of the year's worst films. I would like to get that pertinent fact out of the way before we discuss it properly. But for those with horrid taste in cinema, questionable politics, and terribly short attention spans, i.e. the target audience of this movie, I feel it is my duty to say: Don't see this film. Do something else. Enjoy the final days of the summer. Solve a crossword puzzle. Call grandma. Do whatever you like. But don't see this reprehensible movie.

Criticizing superhero films tends to put the reviewer slightly lower on the ladder of popularity than the bloke that shot Bambi's mother. These films have a tightly knit audience. If a critic takes a superhero movie seriously and chastises it for its shortcomings, fans pounce with the age-old mantra: "It's only a comic book film!" But if the critic dismisses a superhero movie, the fans shout: "There is real meaning to this work, and you are biased." As such, the critic can't win. Why is it possible to soberly dissect melodramas, thrillers, even comedies—is it because they rank as "high culture," and are therefore immune to petty, juvenile arguments? Or is it because superheroes have somehow become the embodiment of popular culture and consequently impossible to doubt, for fear the whole lot may crumble away?

I believe the latter to be the case. The superheroes present a very simple solution to the complexities of the modern world. The various shades of grey that line the surface of apparently "deeper" superhero films, such as Christopher Nolan's Batman trilogy, are mere distractions from the utter ridiculousness of the core concept: a man in a costume fighting crime! As such, taking superhero fare seriously amplifies both its absurdity and fascist overtones. The word fascist is frequently misapplied, but it does fit with the superhero aesthetic, which is about one thing and one thing only: violence. Superheroes overpower their opponents with brute force, and as such are the most hideous display of power-worship.

Directed by Matthew Vaughn and based on the work of former enfant terrible of comics, Mark Millar, 2010's "Kick-Ass" was a transgressive take on the superhero concept, exploring a world where comic book nerds of various ages and intellects donned skin-tight costumes to fight mobsters. The film's philosophy and its approach towards justice was problematic, but Vaughn had a deftness of touch that propelled the story. Equally interesting was the pairing of Nicolas Cage and the then pre-teen Chloë Grace Moretz as Big Daddy and Hit-Girl, respectively. This father-daughter team of benevolent psychopaths was a highlight not necessarily because of the characters, but because of the obvious quirkiness of the actors and their chemistry. On the whole, though, "Kick-Ass" wasn't a very good movie.

What sinks "Kick-Ass 2" from the level of a merely terrible end-of-summer movie to the depths of utter junk is its wanton disregard of the very basic difference between right and wrong. Written and directed by Jeff Wadlow, the film kicks off a few years after the end of the previous film. The 17-year-old high-schooler Dave Lizewski (Aaron Taylor-Johnson) still midnights as the titular hero, all the while trying to convince the orphaned 15-year-old Mindy a.k.a. Hit-Girl to join him. When he is finally turned down, Dave joins with Colonel Stars and Stripes (Jim Carrey)—an ex-mobster turned crime fighter, around whom a ragtag group of vigilantes has mobilized in an orgy of self-affirmation.

Meanwhile, Mindy joins a group of her own when she hangs up her purple Hit-Girl outfit, and starts to attend high-school: a triumvirate straight out of "Mean Girls," who take her under their wing for "re-education."

A further subplot involves Chris D'Amico (Christopher Mintz-Plasse), former sidekick to Kick-Ass, who has gone into the family business after Dave murdered his mob-boss father in the previous film in a particularly spectacular manner. Chris refashions his mother's S&M gear into a costume, and reinvents himself as the world's first super-villain, adopting a name which, in the '80s, would have been dubbed on British television as "The Melon Farmer." These three plots plod along in a tale of vengeful one-upmanship to eventually converge in one of the least interesting action scenes of recent times.

At its most basic level, the film feigns concern towards how revenge can be a bottomless pit. Violence doesn't merely escalate in the film, it consumes all. The level of terror multiples geometrically, as one death begets two, and then four, etc. Millar's original comic is considered by halfwits as a post-structuralist work, but this sort of reading is only valid for armchair proponents of even the real-world history of violence being its own fiction. Of course, this is all rubbish. The uneven tone of the violence contributes to the confusion. During one memorable scene (for all the wrong reasons), a gigantic ex-KGB agent called Mother Russia dispatches ten police officers in increasingly violent ways as a sped-up, trance version of the Tetris theme plays. I am not sure what reaction Wadlow was going for, but I was sickened. This did not make me reassess my position towards vigilantism or violence, seeing as I am not a sociopath. I don't need a superhero film to tell me that kicking the living crap out of people is wrong.

So there is a pitch, an angle to all this, but frankly, it's hackneyed. Rejection of authority, ignoring the squares, being your own man, the idolization of the self: yes we've all become depressingly familiar with those tired old refrains. We can do anything we want; there is nothing holding us back; and we're just boring and irrelevant if we don't sign up. This is not the '90s, and it's definitely not ten years ago, either. We're in a post-crisis economy. The only people who would buy into "Kick-Ass 2"'s insipid afterthought of a philosophy occupy the same counter-cultural bubble as Wadlow and Millar, whose film expects blithely that no one could possibly disagree with these self-evidently correct beliefs. It's all rather insulting.

Also insulting is the film's view towards women and girls. I was not expecting the film to treat them as transcending their circumstances and being worshipped as life-giving earth mothers, but was it really necessary to have three girls vomiting and defecating simultaneously? Also, it would have been OK to have at least one female character that was not a complete buffoon or in need of validation through male acceptance. The film's misogynistic take on women reaches its apex in a rape scene that is played for laughs. Wadlow keeps the camera tight on the wannabe rapist's face at first, and stays on him as he masturbates furiously to try to get an erection. All the while, there is a woman in the corner, fearing the worst. But Wadlow refuses to cut to her: our attention is on the potential rapist. Wadlow's mastery of film grammar is generally questionable anyway, but someone should have had words with him about this scene. Possibly his mother.

Also icky is the sexualization of Chloë Grace Moretz, a trend that began in last year's "Dark Shadows" and continues here, where the hormonal vagaries of Mindy's body are brought to the screen in fairly graphic ways (I was surprised to discover that the boy-band who inspires her sexual awakening is in fact real). Grace has been good before, but here she seems to be mimicking emotions she was yet to experience, rather than acting. Considering how grating Christopher Mintz-Plasse's and how bland Aaron Taylor-Johnson's personae are, her subpar performance is particularly conspicuous.

By the end of "Kick-Ass 2," Dave is redeemed by the "perfect," virginally pure, specimen that is Mindy. This betrays a further fascist motif inherent in the narrative. Throughout the film, it is unclear quite what Dave is thinking when he stares at his perfect, Aryan sidekick. The eerie sexual prompting surrounding her takes on an additional political burden. By the end, Dave is defending Mindy, the racially pure, against the unwanted attentions of the outcast portion of society. And Mindy, like a cross between a Smurf and a Valkyrie, is wreaking vengeance herself. This is post-structural fascism, with the hint of the past fueling the engine of violence. But the two kiss at the end, so it's all good, I suppose.

"Kick-Ass 2" is a badly made film with a nonsensical plot, lackluster performances, confusing action, excessive violence, and deplorable morals. Avoid it at all costs. If you have a date this weekend, and they want to see it, avoid them, too. Forever. 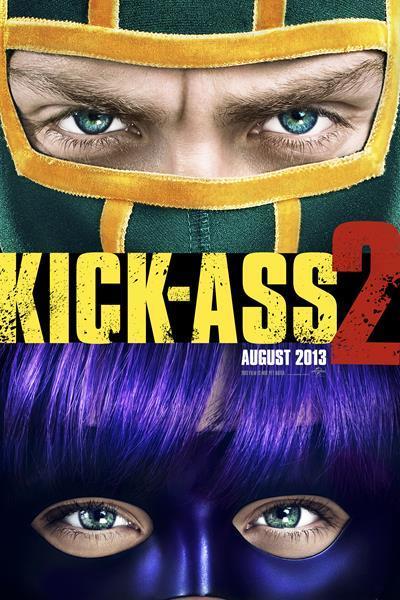 Andy Nyman as The Tumor