An impressive team comes together in front of the camera and behind the scenes for the heist thriller “Triple Frontier,” but the results are frustratingly uneven.

J.C. Chandor directs a script he co-wrote with Mark Boal, an Oscar-winner for “The Hurt Locker.” In just a few features, Chandor has carved out a smart, signature style of exploring complex moral ambiguity, from “Margin Call” to “A Most Violent Year,” with the quietly gripping Robert Redford starrer “All Is Lost” in between. This time, working with a strong ensemble cast that includes his “A Most Violent Year” star Oscar Isaac and Ben Affleck within scenic yet perilous terrain, it would seem on paper that Chandor has another gripping, can’t-miss drama on his hands.

But while the action itself is vividly shot and often quite tense, the characters are so thinly drawn that it’s impossible to connect with them, much less care about whether they make a clean getaway with their stolen millions. The aftermath of the crime is more intriguing than the set-up, as the movie’s quintet of former special-ops badasses struggles to navigate one obstacle after another in the treacherous section of South America that gives the film its title. (The Triple Frontier is where Paraguay, Brazil and Argentina meet at a bend in the Parana River.) But by then, we know so little about them that we’re not nearly as invested as we should be in the difficult decisions they must make in the name of survival.

The film begins with Isaac’s Santiago “Pope” Garcia, now a private military contractor, leading a heavily armed team in an explosive raid of a drug cartel kingpin’s secret lair inside a disco. Working with an informant (Adria Arjona, who gets little to do besides run and be beautiful), Pope crafts a plan to steal the $75 million the crime boss has stashed away inside his hidden fortress of a home. But he needs help from his old buddies, so “Triple Frontier” becomes one of those tried-and-true genre movies about getting the team back together for one final score. Only this time, they’re running this mission for themselves, not for any government or ideology. The film touches on the notion that these men have given everything for their country, and in return, they’re barely staying afloat. The moral gray area of the premise is intriguing, as is the skeptical approach to patriotism—a frequent theme in Boal’s writing. But the superficial way in which it depicts the reality of the characters’ daily existence makes the inspiration for the crime barely resonate.

Despite being the conduit for the action, Pope isn’t even the most developed character of the bunch (although Isaac is always a charismatic screen presence). That would be Affleck’s divorced dad Tom “Redfly” Davis, whom we see early in the film struggling to sell crappy condos as a real estate agent in Florida. He’s still a hulk of a man but the weight of the world as a civilian clearly has beaten him down, and he seems the most in need of the kind of cash this scheme could provide. The others are brothers William “Ironhead” Miller (Charlie Hunnam), who travels around giving motivational speeches, and Ben Miller (Garrett Hedlund), who travels around getting the stuffing beaten out of him as an MMA fighter. (The casting of the similarly hunky Hunnam and Hedlund as brothers is so perfect, it’s a wonder no one’s ever done it before.) Rounding out the group is Pedro Pascal as Francisco “Catfish” Morales, a pilot who’s lost his license for running cocaine. These characters enjoy sporadic sparks as they reconnect and relive old times.

Mostly, though, “Triple Frontier” is all about the action, which is lean and muscular. The heist itself is particularly tense and features some clever touches; despite being meticulously planned, it becomes a race against time with some unexpected variables. And here’s where it starts to become clear that getting away with the money is going to be way more problematic than getting in and taking it in the first place. Every step of the way provides some new life-or-death dilemma, the highlight being the heart-pounding helicopter ride across the Andes. And every sacrifice makes our heroes wonder whether the mission was worth the trouble after all.

Naturally, as things continue to go sideways and the stress levels become unbearable, these guys turn on each other. But that core human element of this extraordinary scenario fails to resonate because we barely know them, despite supposedly having seen them at their best and worst. 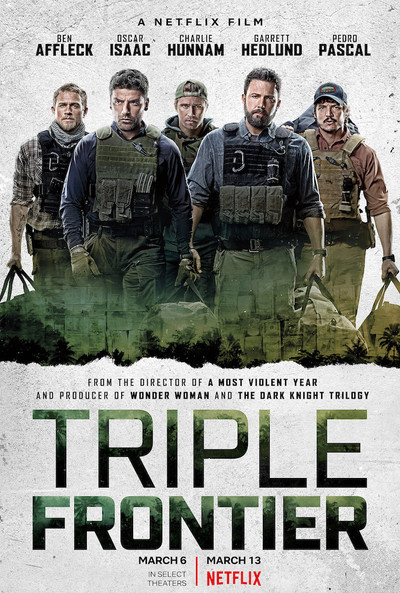