There’s something timely in releasing a film about intense divisions between people that lead to violence during this particular week in American history. And there are enough times when “Triggered” unexpectedly lives up to its clever potential, reminding viewers how quickly average people will act to protect their own self-interests, even if that means murder. A few weak performances in the ensemble and some generic direction are off-set by the sheer momentum of the piece—it’s imperfect but it’s never boring. And, at its best, it’s self-aware in a way that’s reminiscent of the ‘90s slasher renaissance in films like “Scream” and “I Know What You Did Last Summer.”

Writer David D. Jones’ screenplay definitely reminds viewers of “Summer” in its moral construction. Any time young people in a horror movie repeatedly say things like “high school was a long time ago,” you know they’re going to pay for something they did back then. Early references to a dead friend from that chapter in their lives make it clear that this group of young people are bringing some secrets to the woods for a remote camping trip. The first few scenes of “Triggered” loosely define the nine characters, outlining a few relationships, histories, and character traits. The latter often comes through some pretty superficial dialogue (“You were valedictorian and now you’re graduating from MIT”) and, to be honest, most of the character definition work doesn’t take. With a few exceptions, it’s hard to tell most of these personalities apart, and not just because all of “Triggered” takes place in the dark woods.

Most people won’t care because the success of “Triggered” is tied to its premise. Our nine genetically blessed heroes wake up in the middle of the night to discover that they had been drugged and suicide vests were strapped to their bodies. One of their teachers from high school emerges from the woods and makes clear how much they’re basically living in a “Saw” movie now. Only one of them is going to survive this experiment, one that their teacher is running because of the death of his son, which he clearly lays at the feet of his former students. He doesn’t really make the rules clear, but the squad figures out the hard way that the timers on their vests are impacted by the deaths of people around them. In other words, kill someone else and your timer goes up, "taking" however much time your victim had left on his or her clock. After some panic, they start going after each other. Like with sharp objects.

“Triggered” works more conceptually than in its execution. It’s refreshingly self-aware with some truly clever lines of dialogue (“I can’t even eat gluten—I’m not going to kill anyone” and the great “In most horror movies, the f*cking bad guy isn’t, you know, ALL the good guys.”). And once it gets going it really doesn’t stop. Yes, it’s mostly a lot of screaming in the dark—I wish it wasn’t often so poorly lit and framed—but director Alastair Orr understands that momentum is essential here and he rarely slows down. Jones’ script also doesn’t lean too hard into the “Millennial commentary” that would have distracted a lesser film. It’s there in references to blocking people on social media, Amber Heard, and the way that the title has another meaning in the world right now, but this is not the takedown of a generation that it could have easily become.

There’s a pretty shameful twist involving a closeted character who betrays his friends in part because he’s closeted that feels like the kind of twist that was shown the door in horror years ago, but the majority of “Triggered” reminded me of that era in which the genre relied more on concept and cleverness than what has been recently described as “elevated horror.” In the wake of “Scream,” a dozen or so imitators followed, films that were aware of the goofy funhouse nature of their concepts and embraced it instead of being embarrassed by it. “Triggered” would have fit right in. 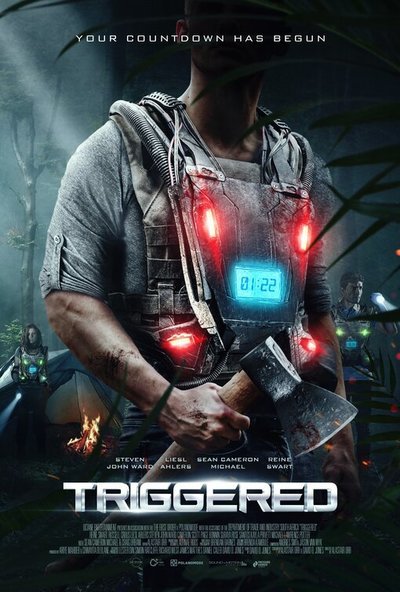