It's supposed to be cheating to make an admission like that. I myself believe that it is a film's form, more than its message, that makes it great. And yet "Tribute" is not a visually distinguished film. It has been directed, by Bob Clark, as a straightforward job of work. There are long sequences that are obviously just filmed scenes from Bernard Slade's original stage play. Yet the characters transcend these limitations and become people that we care about.

The film is mostly Jack Lemmon's, and he deserved his seventh Academy Award nomination for his performance as Scottie Templeton, the movie's hero. We all know somebody like Scottie--if we are not, God forbid, a little like Scottie ourselves. He's a wisecracking, popular guy with hundreds of deeply intimate passing acquaintances. He also has a few friends. One of them is his business partner (John Marley) and another is his ex-wife (Lee Remick). They love him and stand by him, but he can't allow himself to reveal how much that means to him. He is also hurt by his relationship with his son (Robby Benson), who has the usual collection of post-adolescent grudges against his father. All of these relationships suddenly become much more important when Scottie discovers he is dying. The movie begins at about that point in Scottie's life, and examines how the fact of approaching death changes all of Scottie's ways of dealing with the living.

His son comes home to visit for a few weeks. His ex-wife returns to New York for a college reunion and stays to become involved in the crisis. The friend, Marley, acts as counsel and adjudicator. Other characters pass through, including a young woman (Kim Cattrall) who Scottie thinks would be ideal for his son (after all, she'd previously been ideal for Scottie himself). Veteran playgoers can already predict the obligatory scenes growing out of this situation. Scottie will be brave at first, then angry, then depressed, then willing to reach out to his son, and finally reconciled to his fate. Scottie's friends will rally around. His son will learn to love the old man. Everybody will become more human and sensitive, and the possibility of death will provide an occasion for a celebration of life. Et cetera.

What's amazing is that when these predictable situations appear, the movie makes them work. A great deal of the credit for that belongs to Lemmon and Benson. They are both actors with a familiar schtick by now: Benson trembling with emotions, Lemmon fast-talking his way into sincerity. In "Tribute", though, the movie's characters are so close to the basic strengths of Lemmon and Benson that everything seems to work.

Take Lemmon, for example. Another actor, playing Scottie Templeton, might simply seem to be saying funny lines, alternating with bittersweet insights. Lemmon makes us believe that they're not lines; they're the way this guy talks. The big emotional changes take place underneath the surface wisecracks, making them all the more poignant. Robby Benson sometimes comes across as too vulnerable, almost affected in his sensitivity. Here, he's good, too: Examine the early scene where his father asks what the hell's going on, and Benson begins, "Let me try to explain about that ..." with touching formality.

Maybe your reaction to "Tribute" will depend on your state of mind. I know people who say they "saw through it," dismissing it as merely a well-made play. I know others, myself included, who were really touched by it. Perhaps the film works better because it's willing to be a bittersweet soap opera. Life itself, after all, is rarely a great directorial achievement, but almost always seems to work on the melodramatic level. 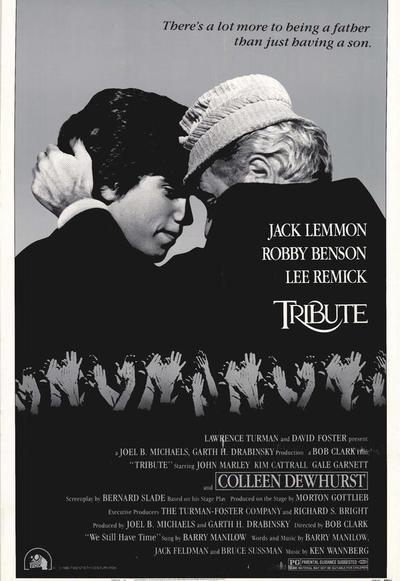