“Train to Busan” was a tight, effective zombie action movie that has only gained in popularity in the four years since its release, thanks in part to being a staple on pretty much every streaming service. Yeon Sang-ho’s flick was a clever hybrid of influences, but it worked well because of its focus, sprinkling in a bit of a morality play but expending most of its energy on a train full of zombies headed for what could be the only safe place on the continent. Perhaps in an effort to stretch his skill set, Yeon goes for a wider canvas in “Train to Busan Presents: Peninsula,” and the overall project suffers by simply being nowhere near as taut as its predecessor. It meanders through its midsection and throws so many influences in the blender that the result feels less urgent overall. We’ve seen most of this before, done better, despite a few powerfully robust action sequences here. While it’s undeniably a sophomore slump in this franchise, Yeon’s skill with action keeps it from dipping too far that we should give up hope he can find the track again in another installment.

Jung-seok (Gang Dong-won) is attempting to leave South Korea with his family in the days after the end of the world. As they’re fleeing the mainland, two parents and a child beg for a ride, but the blood on dad’s shoulder spooks out Jung-seok and he keeps driving. Immediately, “Peninsula” is revisiting themes from the first theme in that quick moral decisions have impact. Jung-seok’s sister is forced with an even more tragic decision moments later when the boat they’re on turns out to have an undead stowaway, and, before you know it, “Peninsula” has flashed forward four years to a much different landscape.

A shell of what he used to be, Jung-seok is offered a deal and, for a minute, it looks like “Peninsula” might be a cross between “Wages of Fear” and a George A. Romero movie (I would totally watch that movie, by the way). Like in the Clouzot masterpiece, a group of people are asked to navigate a truck over dangerous ground. In this case, the truck carries $20 million, and it just happens to be behind enemy lines back on the Korean peninsula. Can this quartet drop in, get the truck, and get to safety without waves of zombies eating their brains? Sounds focused and fun, right? Sadly, this isn’t that movie.

Too quickly, “Peninsula” becomes another movie altogether when our heroes discover that there are a lot more than zombies left on this side of civilization. A “Mad Max”-esque culture has already formed, complete with its own Thunderdome in which humans are pitted against zombies in a watery pit. (I would maybe have thought that four years is too quick for a Fury Road situation but the last six months have made me wonder.) In this hellscape, Jung-seok finds survivors too, of course, and “Peninsula” eventually returns to the original’s roots in the sense that it becomes about trying to get to safety as urgently as possible, there just happens to be more gun-toting bad guys chasing them than any zombie movie needs.

“Peninsula” is at its best when it’s focusing on Yeon’s visual sense related to zombie action. The intensity of train cars filling with zombies that may then come tumbling through windows gave “Train to Busan” its energy, and “Peninsula” finds power in similar moments. Waves of zombies rushing heroes in a dark tunnel, falling from a bridge, or even being caught in the moonlight through a window are what people will remember from “Peninsula.”

Because it sure won’t be the characters. Gang Dong-won is fine at the limited rage he’s asked to find here but, even though it tries some of the same emotional beats, “Peninsula” doesn’t have the same depth of character as the first. The father-daughter dynamic in the original gave it teeth that are missing here, and even supporting characters there became engaging. Without spoiling anything, sacrifices in “Train to Busan” had impact. Everything feels distinctly more superficial in “Peninsula,” which makes it easier to forget.

By blowing up the world of this franchise, Yeon reveals his weaknesses with plotting and character too. Worst of all, he also doesn’t seem to grasp what worked so well about the first movie. The midsection of “Peninsula” is barely even a zombie movie, turning more into a post-apocalyptic action flick with a few zombie vs. car scenes that almost feel inspired by “Fast and the Furious” more than Danny Boyle’s “28 Days Later.” How “Train to Busan” became a franchise in which children distract zombies in a post-apocalyptic world by showing off some wicked drifting in lengthy sequences with poor CGI is something I’ll never quite understand.

People often criticize sequels for being mere retreads of the first movie. To his credit, Yeon Sang-ho didn’t not merely pull a “Speed 2: Cruise Control” and try the same concept on a different moving vehicle. Although fans may wish he had. 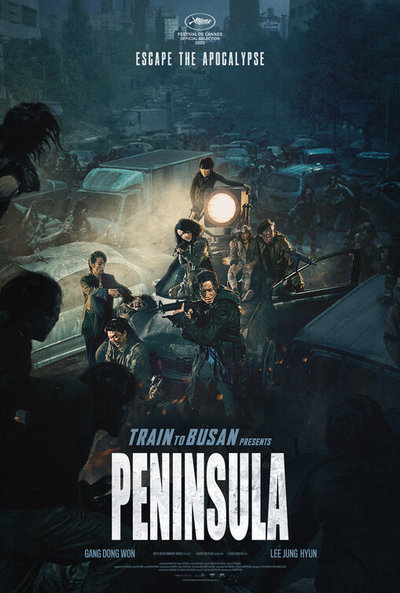 Lee Re as Joon