This gentle, small film had me thinking of E.M. Forster's exhortation to "Only connect!" (from his novel "Howard's End"). Two of the main characters in this film connect intimately with people for a living, and their differing approaches to that connection form the crux of the story. Abby (Rosemarie DeWitt) is a massage therapist whose life seems centered and complete. Her professional touch is an extension of her whole way of being. Her brother Paul (Josh Pais) is a dentist who is only really comfortable when he is performing his job. The way he cleans a dental mold speaks of the happy craftsman, but his interactions with Abby and with his daughter Jenny (Ellen Page) are so awkward that for a while you may wonder, as I did, if the character is meant to have the condition du jour for film and television, Asperger's Syndrome.

And then something strange happens. Abby's boyfriend Jesse (Scoot McNairy) suggests, in an heartfelt but unthought-out moment at dinner with her brother and niece, that Abby should move in with him. And Abby begins to dread touching people. As you can imagine, this is a catastrophic problem for a massage therapist, and for Abby it triggers an existential crisis. She can't stand to be touched by Jesse. She can't do her job. She stares at her skin (in wonderful closeups), seeing the strange landscape that is skin.

Meanwhile, Paul, whose dental practice is foundering because he's unwilling to do anything to get new clients, also experiences a strange change. Jenny—who also works as her father's dental assistant, though she clearly longs to do something else—persuades Henry (Tomo Nakayama), a barista from her favorite coffee place, to come in for a free checkup. He's got jaw pain, he admits. Jenny praises her father's miraculous touch, and in fact Paul's touch cures Henry's pain. In short order, Paul has a waiting room full of people hoping he can stop their jaw pain.

I wanted to like this movie more than I did. DeWitt radiates a warm comforting presence that makes her completely believable as a massage therapist you'd want to see. And when the character faces this strange crisis, DeWitt can do a lot with scenes of quiet dread. But that's a lot of what she's given to play for the middle section of the movie, and an Ecstasy trip late in the film seems like a contrivance to get her out of the story trap Shelton has written her into.

The secondary actors are solid. Ellen Page easily conveys her love for her genuinely weird father, but also her need to break free of the confines of their shared life. (There's clearly some backstory, thankfully left vague, about the loss of her mother.) And Scoot McNairy, an actor I've liked ever since "In Search of a Midnight Kiss," knows how to do something with the supportive but confused boyfriend role. Alison Janney is sensational but underused as Abby's friend, a Reiki massage specialist and all-around earth-mother who tries to teach Paul about the energy that flows between bodies.

But I am torn about Josh Pais's work as Paul. He takes the awkwardness to such an extreme that for the first half of the film I felt like his character was not quite from the same world as Abby. His style seems broader, more mannered. And in the second half of the movie, when Paul opens up, Pais gets cheated by a lazy montage of his growth rather than fully developed scenes.

My reaction to this film is an evolving thing. In the first minutes after it ended, I felt let down, even though the ending is conventionally a happy one. But in the days since, I have found myself thinking about these characters at unexpected moments. Maybe the film, like its characters, just needs a little time to grow on you. 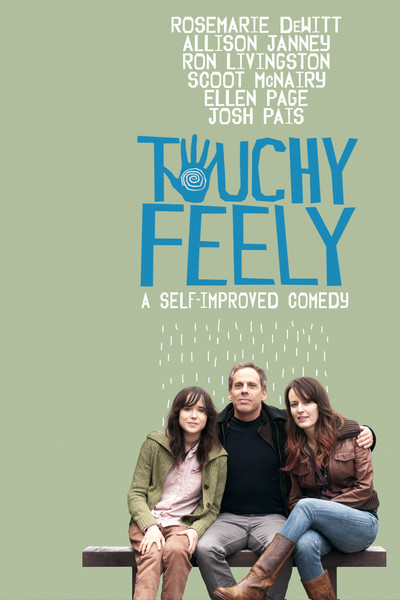