As a piece of filmmaking, "Torn" is slightly above TV-movie quality. But few dramas manage to pack in so much topicality in a slim 79-minute running time as it zeroes in on bullying, terrorism and racism in one fell swoop. The events depicted are seen through the eyes of two very different mothers, who are drawn together after their teen sons die in a San Francisco Bay-area mall bombing.

That "Torn" imparts any insight about our violence-prone society where mass killings and security threats have become a regular part of daily life is mostly due to the efforts of its female leads. As Maryam, a realtor who is happily married to Ali (Faran Tahir), Pakistani model and TV actress Mahnoor Baloch offers an introspective performance that relies greatly on her beauty and a quiet storm of emotions as she deals with her grief over the loss of Walter, her only child.

More feisty is single-mother Lea (Dendrie Taylor), whose hardened features reflect her struggles as a late-night office cleaner while dealing with an ex-husband who has contributed little to the raising of Eddie, also an only child. Taylor, one of Mark Wahlberg's scary-tough sisters in "The Fighter" and a former regular on TV's "Sons of Anarchy" and "True Blood," has the kind of expressive face that provides more backstory than any flashback could.

After meeting at the police department, the two women console each other and form a tentative friendship—that is, until Walter is suspected of setting off the bomb in retaliation for being taunted as a Muslim by classmates. Lea initially feels angry and betrayed by the turn of events. Then Eddie is then pegged as the possible perpetrator after it's learned that he threatened to kill a gang of bullies who were picking on him days before the explosion. Lea must admit to herself that she didn’t know her son as well as she thought, and that she and Maryam are probably more alike than not.

It's a good thing that the focus is on domestic issues rather than legal matters, considering the questionable way that the investigation is handled. Before there is enough evidence to prove that either high-schooler was behind the horrendous crime, newspaper headlines are quick to finger first one and then the other as prime targets in the case. And, strangely, neither family seeks out a lawyer for advice and to protect their rights—not even Maryam, whose home is vandalized and spray-painted with hateful messages.

The lone good cop is John Heard, fully embracing the character actor stage of his career, who relates to both women since his own son died fighting in Iraq.

Director Jeremiah Birnbaum is big on portentous piano music, gathering rain clouds and shots of laundry spinning in the washing machine to create an ominous mood instead of trusting more in his capable cast. A coda at the end does provide somewhat of a surprise resolution, but it isn't entirely earned by what has transpired before. Ultimately, "Torn" only does half its job as it attempts to personalize these divisively turbulent times. 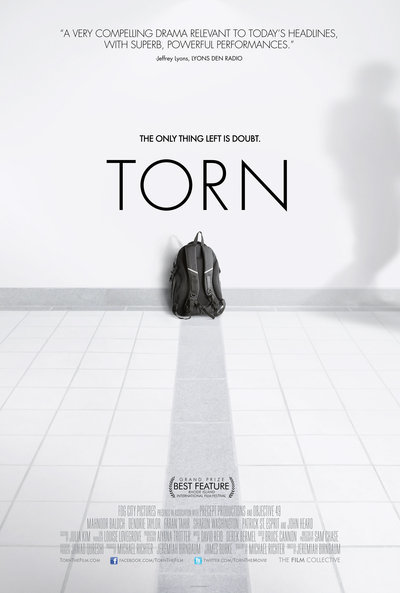