You’ve already gotten the joke once you’ve read the title of “Tone-Deaf,” a monotonous horror-comedy that pits a pampered Millennial against a grumpy, murderous Baby Boomer. The Millennial in question is Olive (Amanda Crew), a newly unemployed L.A. hipster who runs afoul of Harvey (Robert Patrick), the liverspots-and-long-underwear-clad owner of the secluded house that Olive rents through an AirBnB-type service. Harvey and Olive don’t see (or care) much about how they act (or look) in each other’s eyes, so he assumes she “doesn’t like to get [her] hands dirty” while she rolls her eyes and groans about “cultural appropriation” when he comes at her with a home-made tomahawk axe. Most of the jokes in “Tone-Deaf” are variations on this gag: Harvey is a sentient fossil while Olive is an entitled brat. “Fine People On Both Sides” might have been a more apt title for this dud.

Writer/director Richard Bates Jr. (“Excision,” “Trash Fire”) exhaustingly panders to Millennial viewers by making Patrick’s grumpy, fourth-wall-breaking coot spew third-hand received notions about Millennials, like how “life is all about hard work and sacrifice” and only Boomers see “the big picture” while hoity-toity Millennials are riding their “climate change high horses,” but are really a bunch of “brunchin’ bimbos, with your skinny margaritas.” Patrick delivers these puling asides with enough venom, but his dialogue only proves how desperate Bates is to bait viewers into rooting for Olive, like when he grumbles that he only wants to murder her for ideological reasons: "It's nothing personal; it's not you, it's just everything you represent.” At last, a satire that’s as shallow as our current political moment.

Harvey and Olive are equally uninteresting, even if her self-awareness supposedly makes her more sympathetic. Still, Olive’s at least partly defined by her obnoxious accessories: thick, black plastic frames on her eyeglasses; a jersey-style long-sleeve shirt that announces “the struggle is real”; and a personal soundtrack that features an Awkwafina song about how her “vag” is “effortless” while “your vag posts ads on Craigslist.” I guess irony really is the shackle of youth.

Olive also struggles to connect with her estranged mom Crystal (Kim Delaney), a sassy hippie who demands (and receives) oral sex from a spacey younger man named Uriah (Johnny Pemberton). Crystal is the star of one of the only memorable scenes in “Tone-Deaf;” she texts a saucy winky-face emoji to her daughter while she’s doing the mess around with Uriah. This tossed-off joke is unusually funny, possibly because it’s not a product of tired generation gap or Red state/Blue state shtick, like when Olive’s BFF Lenore (Hayley Marie Norman) encourages her to “wear her Coastal elitism with pride” or when Harvey’s blinkered family friend Agnes (Nancy Linehan Charles) tells Harvey—just before he ties her up and attacks her—that “the good old days” “[weren’t] so good for the rest of us.”

Bates takes his time in setting up easy targets for his actors to knock down. Crew stands out among the movie’s strong ensemble cast since she brings the most range to her otherwise one-note character. Crew’s performance occasionally reminded me of Alicia Silverstone in “Clueless” as smarter-than-she-sounds valley girl Cher, especially when Olive turns an anxious prayer into a one-sided guilt trip: "And plus, also, don't forget: You gave me my dad the chemical imbalance which caused him to commit suicide.” Crew also earns belly laughs when she interrupts Harvey’s rambling about “f—kin’ Millennials” with "So ... backtracking ... for just a moment ... um … ”

Crew’s line delivery is generally funnier than Bates’ dialogue, just as Patrick’s deadpan line delivery is more satisfying than Harvey’s improvised “remix” version of “This Land is Your Land”: “This land is my land, this land is my land,” he growls right before concluding that “this land was made for me and me.” Harvey’s character is just as under-developed as Crystal or Uriah—try not to groan at the desperate quip Delaney fires off during the movie’s climax—but he’s more irritating because he’s armed with clunky, pseudo-triggering jokes that would make the hackiest heel wrestler blush, like when Harvey raves that Millennials should “drink a gallon of bleach” to stop overpopulation. Poor Robert Patrick; one day you’re running after John Connor in a cop uniform, the next you’re wearing an ugly sweater and bitching about your college-educated son, the self-described “entrepreneur.”

Most Patrick-centric scenes made me wish “Tone-Deaf” were less about Harvey’s relationship with Olive, and more about Olive’s frustrated attempts at processing her father’s above-mentioned suicide, like when she goes on an acid trip, filmed in a series of multi-colored extreme close-ups of Crew’s face and the faces of Olive’s dad (Ray Wise, of course) and a bunch of her ex-boyfriends, too. This scene is exceptionally funny and visually dynamic; the rest I could do without. 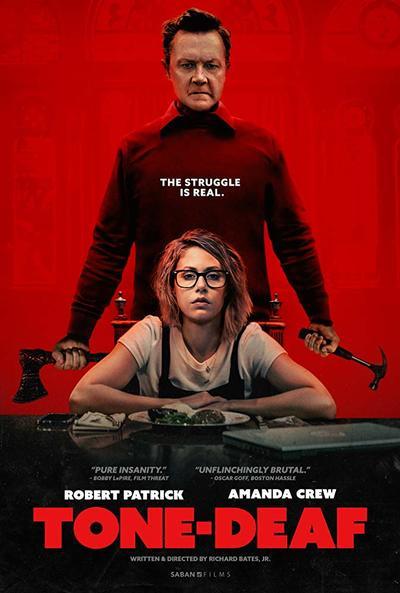