Movies about sports inevitably divide between those which appeal mainly to devotees of the game depicted and those with cinematic or dramatic values capable of attracting a much wider audience. Jason Connery’s “Tommy’s Honour” belongs to the former category: the true story of father and son duffers in 19th century Scotland, it is a movie for golf enthusiasts, pure and simple.

That’s not to say the film doesn’t have other virtues. With its rugged landscapes, handsome production design and, especially, the very appealing work of leads Peter Mullen and Jack Lowden, “Tommy’s Honour” is an ingratiating production all-round. Yet its natural audience will be those smitten either with the experience of golfing or the considerable literature celebrating that experience.

Like much of that literature, the movie, derived from Kevin Cook’s eponymous book, is tradition-minded, which is to say a tad nostalgic and unapologetically patriarchal. It concerns “Old” Tom (Mullen) and “Young” Tommy Morris (Lowden), who, according to titles at the film’s end, were “founding fathers” of the sport—a statement that’s closer to accurate if you insert “modern” before “sport.” (Indeed, golf was already old when it was banned by King James II in 1457 for interfering with archery practice.)

The historical turn reflected in the movie’s story was when golf moved from being a sport for aristocratic amateurs to a profession open to all classes. After a future-tense prologue, the tale begins in the 1860s, when Old Tom is a caddy and greenskeeper who golfs but mainly serves his masters without complaint. When Tommy begins to show promise as a golfer, the two begin to play together, and turn out to be a team that’s rarely beaten.

As their successes mount, so do Tommy’s nerves and impatience with his dad’s servility. Although he’s told “you’ll never be a gentleman” more than once in the film, he’s not afraid to go toe to toe with snooty aristo Alexander Boothby (sterling Sam Neill), the head of the Royal and Ancient Golf Club of St. Andrews, where Old Tom works. Eventually Tommy wins the financial concessions he seeks, which implicitly sets golf on the way to being the billion-dollar sport and industry it is today.

The other area where Tommy bucks tradition is in his romantic life. One day he spots Meg Drinnen (Ophelia Lovibond), a pretty serving girl with a spunky way about her. When he gives chase, she warns him that she’s several years older than him, but he’s not deterred. A bigger obstacle comes when Tommy’s family learns that she’s shadowed by rumors of a checkered past, which included giving birth to an illegitimate child who died in infancy.

In chronicling Morris’ tale, which encompasses personal tragedy as well as sporting triumphs, Connery and company take liberties concerning time and people’s ages. In reality, Tommy was barely pubescent when the story’s events began. But from there and through the next 11 years he’s played by Lowden, who’s now 23.

While the commercial reasons behind such decisions are understandable, they have the added benefit of giving the film’s entire length to a young actor of obvious promise. With the striking blond looks of a young Peter O’Toole or Matt Damon, Lowden, who will soon be seen in “Dunkirk,” has all makings of a future movie star on the rise. And his pairing with the always excellent Mullen gives the film a dramatic core that benefits it throughout.

Contemporary golf fans may be chagrinned to learn that some of the golfing feats we witness were owed not to human skill but to computer generated effects. But today’s viewers will inevitably be fascinated by the appearance of these golf courses of yesteryear, which look more like wild bramble patches, with greens which would more accurately be called “browns.”

Incidentally, the film’s father-son dynamic has a notable off-screen counterpart. Director Connery reportedly was introduced to golf by his own Scottish dad, Sean Connery. 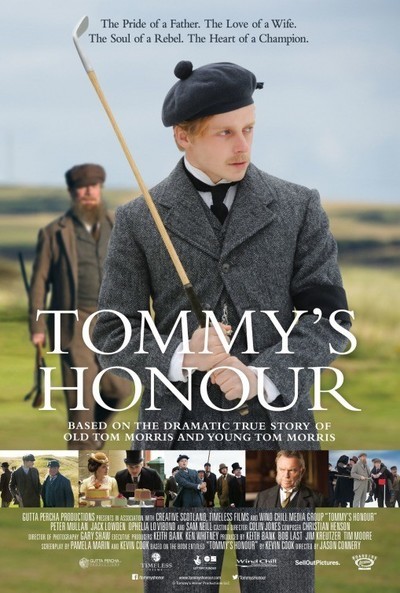