Based on the 2013 video game, and featuring Alicia Vikander as the latest incarnation of a character who's been around for 22 years, "Tomb Raider" surprisingly plays like a throwback to the classic late-'80s/early '90s era of action filmmaking, represented by the likes of "Cliffhanger," "The Last of the Mohicans," the first couple of Indiana Jones films, and Jackie Chan's "Armour of God" series. From the animated prologue, wherein the title character's archeologist father, Lord Richard Croft (Dominic West), tells of an ancient, cursed tomb supposedly containing the all-powerful, weaponizable remains of the Japanese shaman queen Himiko, through its gracefully executed chases and emotional moments, to its finale set on an island riddled with booby-trapped ruins, "Tomb Raider" is better and more original than anyone could have expected.

Although it borrows from the game (and, partially, its sequel) for structure and most of its key action sequences, the movie never feels like a pointless companion piece to a work that was created for a different medium. I've never played the game, but I had a great time watching the movie it inspired, thanks ]to the direction; the stunt choreography, which leans on real performers and props whenever it makes sense to; the emphasis on problem-solving one's way out of tight spots; and most of all, the actors, who flesh out archetypal characters who might have seemed cliched or merely flat on the page, and make them as real as they can, considering what sort of movie they're in.

First among equals is Alicia Vikander. With her faintly regal bearing, she's correctly cast as a woman who's literally to-the-manor-born, but the humility and sense of fair play she exudes makes you like rather than resent the character. More importantly, she's an action hero par excellence. Seemingly bereft of body fat, Vikander hurls herself into action. She makes you feel the physicality of this intensely visceral performance, letting out a high-pitched grunt of rage or pain when Lara crashes into a wall or gets slammed on the ground by a brawny foe, and letting sparks of fury flash in her eyes as Lara delivers a coup-de-grace.

The movie has given a lot of thought to the question of how a small woman could successfully fight opponents who are a lot bigger and stronger. The answers are relentless speed, the strategic use of full body weight, and dirty fighting. This is not to say that "Tomb Raider" is "realistic" in any sense, because no video game movie is—at one point, Lara powers through after a puncture wound that would put a 250-pound Green Beret out of commission—but that the filmmakers and Vikander are doing everything they can to sell the physical and emotional reality of a moment.

As written by Geneva Robertson-Dworet and Alastair Siddons, there's a strong element of domestic melodrama at the heart of the tale: Lara's father went missing and is presumed dead. The movie gradually fills out the details of their relationship, balancing Lara's admiration, even worship, of her father against the pain caused by his frequent absences and ultimate disappearance. This is the story of a daughter learning from, surpassing, and ultimately forgiving her dad—a journey that hits fresher beats than you tend to get in genre films starring male heroes whose fathers died, vanished, or disappointed them (although the third Indiana Jones movie deals in these themes, too).

Paternal abandonment and its aftermath are at the heart of every character's story here. Lu Ren (Daniel Wu), the alcoholic sea captain who ferries Lara to the island that contains Himiko's tomb, is dealing with his own daddy issues: his same-named father once ran the boat, and ultimately vanished, too, which might account for why their relationship feels more brother-sister than romantic (they obviously respect each other, but there's no sexual chemistry because the movie isn't interested in finding any). The bad guy, archaeologist turned corporate mercenary Mathias Vogel (Walton Goggins), is himself an absentee husband and father. He's spent seven years trying to locate Himiko's tomb at the behest of the mysterious Trinity organization, and resents the unseen master who's keeping him on the island until he finishes the job.

Lara has empathy for others, and feels things deeply. I liked how you could hear the catch in her voice or see tears almost well up in her eyes as she deals with moments that cause her distress. These details confirm that "Tomb Raider" isn't going to graft standard-issue, strong-silent tough guy cliches onto a female lead and call it a day. There's more sensitivity and intelligence on display here than there needed to be, and while "Tomb Raider" doesn't go as far in this direction as I would've liked, the unmistakable effort means a lot. Particularly striking is the moment after Lara kills someone for the first time: she sits next to the corpse, looking psychically disturbed as well as physically exhausted. The act of killing is presented in such a cavalier manner in so many action and adventure films that it’s shocking to see it treated as if it means something.

In the end, though, this is a movie about a woman running, running, running, running, then pausing just long enough to kill a man with a bow and arrow, defeat him in hand-to-hand combat, or solve a tumbler-styled puzzle that will open the stone door of a temple containing ancient treasures. "Tomb Raider" treats Vikander as a moving piece of sculpture, admiring her not in a sexually objectifying way, but as one might an athlete. Director Roar Uthaug ("The Wave") often adopts the perspective of an especially kinetic videogame, shooting Vikander from a low angle as she races toward the camera or from an elevated perspective looking at the back of her head and her shoulders, the better to appreciate Lara as she cuts a path through her world.

There are at least five action sequences in this movie that rank with the best I've seen recently. The first is a "fox hunt" on bicycles through the streets of London which sees Lara, who works as a messenger before embracing her destiny, leading a pack of her colleagues on a chase through winding streets packed with cars and trucks. Another finds Lara diving off a cliff into a raging river; she catches herself before going over a waterfall by clinging to a rusted-out, World War II-era bomber that's teetering on its edge, then gradually moves over and through the husk of the plane, trying to get to the riverbank before the whole thing falls apart. (A great Indiana Jones-style moment: as she hears the buckling groan and sees the plane falling to pieces, she mutters, "Really?")

There are frustrations here and there, mainly having to do with the plotting and some of the supporting characters, who are lively and memorable but often lack one or two scenes that would've made them seem as mythically vivid as the material demands. (Vogel's misery is fascinating at first, but ultimately becomes tedious, and I didn't like the way the film sidelined Ren during the final act.) Still, this is a beautifully crafted and unpretentious piece of action cinema, with a number of sequences that are as gorgeous as they are thrilling, and a female hero who's as elegant as she is deadly: an ass-kicking Audrey Hepburn. 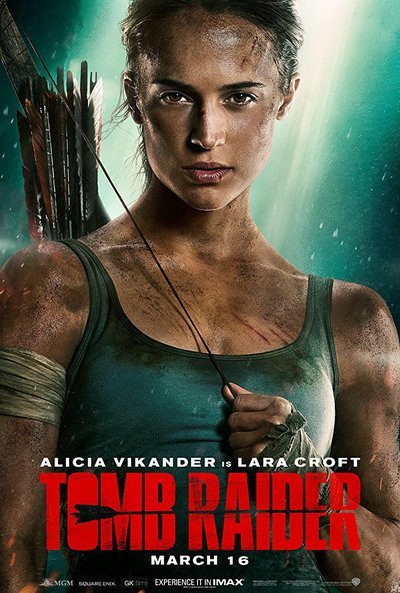 Rated PG-13 for sequences of violence and action, and for some language.