Aggressively mediocre, the updated version of “Tom & Jerry” that premieres in theaters and on HBO Max today is a depressing affair, a film that reminds one of similarly hollow uses of beloved properties like “Yogi Bear” and “The Smurfs.” Although at least those knew to focus on their timeless characters. “Tom & Jerry” barely understands the physical comedy that made the cat and mouse first-round entries in the animated Hall of Fame, focusing instead on a celebrity wedding at a fancy New York hotel and the people who work there. A few sequences of classic T&J comedy aren’t nearly enough to make up for the dull plotting and flat characters in this soulless product, one that will fail equally for adults who grew up on Tom and Jerry, and their kids who have never heard of these characters.

“Tom & Jerry” is a live-action/animated hybrid that takes place in a world in which all animals are animated but all humans are real. But the film barely explores this dynamic in favor of centering a New Yorker named Kayla (Chloë Grace Moretz), who basically cons her way into a hospitality job at a fancy Big Apple hotel the week before a high-profile wedding there between household names Ben (Colin Jost) and Preeta (Pallavi Sharda). As the planning for the wedding gets underway, Kayla discovers that Jerry has taken up residence at the hotel, and so she hires his mortal enemy Tom to take care of the singular infestation before all eyes are on them. Her boss Mr. Dubros (Rob Delaney) supports Kayla but co-worker Terence (Michael Peña) is eager to take down the newcomer ... just because. Ken Jeong plays the hotel chef. You’ve been warned.

The fatal flaw of “Tom & Jerry”? It’s shockingly unfunny. The moments of creative physical humor are few and far between and there’s not a single verbal joke that stands out. “Tom & Jerry” needs extended sequences of animated creativity, and writer Kevin Costello spends way too much time with the dull humans of this version when fans really just want to see the rivalry between two classic characters. A scene in which Tom tries to reach Jerry across a power line hints at what this movie could have been if it had trusted its silent characters in, say, the manner that Aardman trusts fans of Shaun the Sheep.

While Moretz throws herself into the bad material and tries to make the best of it, everything falls flat around her. Director Tim Story can’t find the rhythm or focus to make the humor work and seems almost purposefully uninterested in his human characters. I get it. They’re boring. But then why are we spending so much time with them? And why are the references so stunningly dated? The film opens with a lengthy sequence of pigeons who will never be seen again singing A Tribe Called Quest’s “Can I Kick It?” (great song, sure, but strange choice in 2021) and a later scene includes references to “The Silence of the Lambs” and “The Warriors.” I can only presume that this script has been sitting around for decades and the people hired to do rewrites to modernize it fell asleep on the job. I don't blame them.

Here’s the time wherein critics often feel like Scrooge coming down on 'harmless animated fun for kids,' but trust this father of three when I report that even the little ones will check out here and find something better to do. And the truth is that this market is crowded right now. Paramount+ drops a new Spongebob movie next week and Disney+ will premiere “Raya and the Last Dragon” for those willing to pay an extra fee. And even on HBO Max, where most people will watch this movie, there are dozens of titles, including almost all of the Studio Ghibli catalog. There are simply better choices than “Tom & Jerry.” Almost anything, really.

Available in select theaters and on HBO Max today. 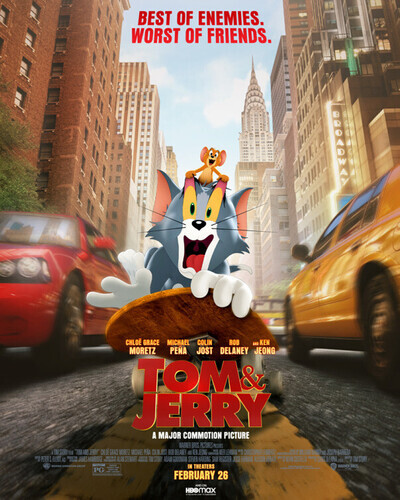