"To Forget Venice" doesn't feel like a story, it feels like an idea for a story, and that's the problem with it: We can figure out fairly early in the film how the neatly symmetrical relationships are going to work themselves out, and then all we're left with is the behavior of the actors working them out. There are few surprises. And when a film really lives, it's full of surprises, because each scene contains the possibility that the characters will change.

But Franco Brusati, the director and co-author of "To Forget Venice," begins with a simple idea: We must put behind us the dependencies and dreams of youth, and accept middle age as gracefully as we can. Now this is a fine idea, but it is not necessarily the only good idea on the subject - and the problem with "To Forget Venice" is that we realize, early and with a sinking heart, that Brusati's characters are doomed to illustrate it. Nobody's going to be allowed to upset the boat.

Here are his characters, neatly arrayed. There is Marta, the aging but still beautiful opera prima donna who lives in one of the big, ancient country houses that line the mainland near Venice. She has never married, but has adopted a niece, Anna. Marta also has a brother, Nicky. A visit to Venice is planned, and Anna and Nicky, who are both homosexuals, join Marta in the big house. Anna brings along her lover, Claudia, and Nicky brings his lover, Picchio.

So we have here three characters (Marta, Anna and Nicky) who are no longer as young as they once were. All three live in the past, in the dreams of youth. Marta remembers her singing, and basks in the praise of the others. Anna and Nicky grasp youth through their younger lovers. Everyone is, of course, narcissistic, and Brusati himself writes of "each of them trying to perpetuate his own youth by reflecting himself in the partner as in a distant mirror."

There is another element to the story: Marta's past greatness, her fame through her art, gives them all something to bask in. Because she stood aside from ordinary humans, somehow they all have license to be unconventional. But then Marta dies, and the film moves into the dreadfully predictable passages in which the other characters are invited to take a deep breath, make a realistic assessment of themselves, and stop living in the past.

All very fine, and well and good, but deadening. Allow me to be irreverent for a moment, in the face of Brusati's pious hopes for human nature. What we have here, after all, is a film that would have created a major scandal a decade ago: Not one but two homosexual couples, lots of nudity and sex, and an atmosphere of decadence and decay.

"To Forget Venice" would have been such a sensation in 1970 that any plot would have been forgiven (and if you doubt me, remember the plot of "I Am Curious [Yellow]"). Wouldn't it have been more interesting to simply follow these potentially engaging characters through whatever might have happened in their situation, instead of forcing them to illustrate the lessons they've learned? 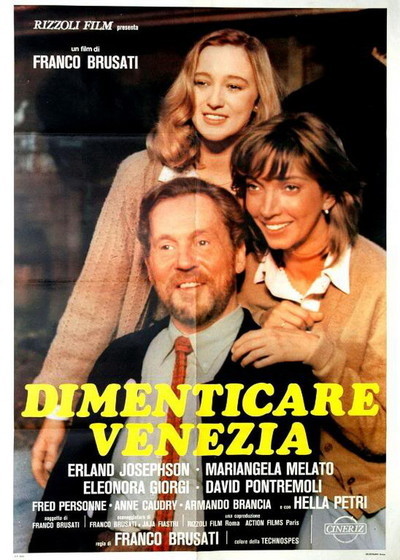