Shakespeare, "Midsummer Night's Dream" It was the largest floating object ever built by man. The Titanic was as long as three football fields, weighed 46,000 tons and was advertised as unsinkable. "Mother thought," remembers Eva Hart, now an old lady, "to call it unsinkable was flying in the face of the Almighty." She was 7 the night the Titanic struck an iceberg, 83 years ago now. Her father put her in a lifeboat, told her it was a "precautionary measure," and said she would be back on board for breakfast in the morning. She never saw him again - or her little dog, who peers up mournfully at us from old photographs.

The loss of the Titanic remains the worst shipwreck in history, and an unforgettable slap at the pride of man. The great ship rests today 400 miles east of Newfoundland and 2 1/2 miles beneath the ocean surface. For decades, it remained as inaccessible as the moon; indeed, men walked on the moon years before the first TV probes found the wreck of the Titanic. Now it is possible to visit the site, using submarines that can withstand ocean pressure so strong that any leak would cut a body in two.

"Titanica," a documentary feature shot in the IMAX process, is based largely on footage filmed at the Titanic's grave. Seen on the giant, five-story, curving Omnimax screen of the Museum of Science and Industry, it is a sight to inspire awe.

I have seen earlier photography from the Titanic, rather muddy and indistinct, and so I was not quite prepared for the high quality of the photography in "Titanica." Two submersibles were outfitted with IMAX cameras, which use film stock that dwarfs conventional movies, and with newly designed lights generating 150,000 watts. The result is positively eerie: At a depth where no sunlight at all penetrates, the subs, sometimes working together, are able to light up the area so effectively that we see clearly as we drift above the bones of the great ship.

Early scenes in the film show one of the subs slowly descending, a speck of light in the darkness. The three-member crews must spend 18 to 25 hours squeezed into tiny quarters on each of their visits, and we see them playing poker and chess, and consuming giant sandwiches. At last, the ocean floor is reached, and a debate breaks out: Are those lumps of coal from the Titanic, or whale droppings? (Almost all IMAX documentaries have a regrettable tendency to alternate the sublime with the corny.) When the Titanic is finally reached, the effect is grand, sad and creepy. The documentary footage alternates with photographs taken before the ship's launching. In one extraordinary scene, the crew members use remote-controlled pincers to pick up a suitcase from the ocean floor. After some argument ("It might contain the log book!"), they replace it. Then we see a photograph of passengers standing on deck on the day of sailing. Next to one of them, on the deck, is what looks like the same suitcase.

The cameras achieve a remarkable intimacy with the vast wreck.

We look out through the windows of the captain's reception room and float past the private promenade of J.P. Morgan's suite. We can see the brass fittings of the wheel, still shiny, although the wooden elements have long since disappeared. "When the ship reached bottom," a narrator tells us, "there would have been corpses littered everywhere. But even the skeletons quickly disappeared in the calcium-depleted water." The debris all tells a story. There are the giant engines, now covered in ropes of sediment. There is a toilet bowl: "Iron," a narrator says. "That would have been for third class. Second class had porcelain, and first class, of course, marble." And we see a single woman's shoe, resting forever now on the bottom.

"Titanica" is the second feature-length IMAX production; the Rolling Stones documentary "At the Max" was the first. The process uses film so large that it must be loaded with a forklift, and there is an intermission while the second reel is put in place. Given the running time, I would have appreciated more Titanic footage, and less about the Russian-U.S.-Canadian expedition that gathered it. The banter of the three-man crew quickly grew tiresome, especially as I began to suspect it was not filmed during actual dives (where would they have put the camera?).

But there are extraordinary moments. One is mundane: A scientist obtains a core sample from the ocean bottom and smooths it with a butter knife, showing how firm it is. In most places, he said, the floor might have been covered with sediment so soft and deep that the Titanic would have disappeared beneath it. But at the spot where she sank, hitting bottom at a speed of 30 M.P.H., the bottom was firm enough to hold her. And so she waits forever, still halfway through her first crossing. 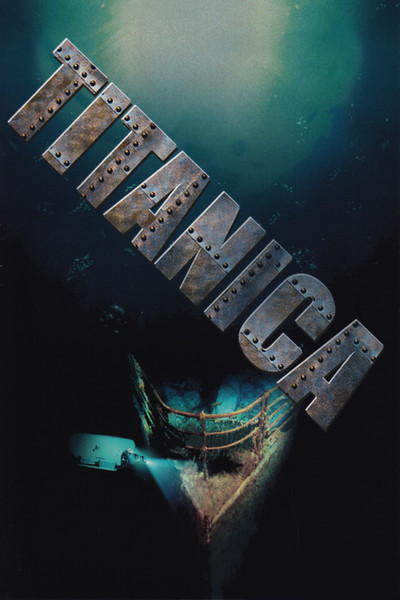 Rated NR Recommended For All Ages, Including Children Older Than 5