Timmy Failure: Mistakes Were Made

Most modern adaptations of real young adult fiction—think not “Twilight” youth but “Diary of a Wimpy Kid” youth—has been serviceable at best. Sure, there’s a sweet dramedy like “Wonder” every now and then, but the majority of these movies are designed merely to remind young viewers what they liked about that book that their third grade teacher made them read that one year. They’re often by-the-numbers adaptations that coast on the goodwill of their source material more than doing anything fresh or fun. I don’t know the source material for the Disney Plus Original Film “Timmy Failure: Mistakes Were Made,” but it really doesn't feel like there's any coasting here. Part of that is likely because of the involvement of “Spotlight” director Tom McCarthy behind the camera, bringing a craftsmanship and dry wit to the film that matches his protagonist and justifies his film's inclusion in this year’s Sundance line-up. Everyone is understandably going crazy for the catalog of well-known titles on Disney Plus, but with “Togo” and now this one, people might be talking about their original films soon too.

The movie takes its name from its deadpan protagonist, the only employee of his company, Total Failure, Inc., the most successful detective agency in Portland. Timmy (Winslow Fegley) lives with his single mother Patty (Ophelia Lovibond), and solves cases with the help of his only assistant, a 1,500-pound polar bear. It’s mostly missing backpacks and fear of “The Russians” (who really just look like and probably are Portland hipsters) until Timmy’s “Failure Mobile,” a Segway that his mother won and told him not to use, goes missing. Can Timmy find the Failure Mobile, steer clear of Mr. Crocus (Wallace Shawn), and deal with the fact that it looks like mom has a new boyfriend (Kyle Bornheimer)? Fifth grade really sucks.

Co-written by McCarthy and the author of the books, Stephan Pastis, “Timmy Failure” is a lovely collection of deadpan jokes. Timmy takes everything very seriously, allowing the characters around him to bounce off the dry wit of the kid at the center of this story. And they do that in diverse, fun ways, whether it’s the genuinely tender performance given by Lovibond, the likable work by Bornheimer, a fun performance from Craig Robinson, or the always-welcome Shawn, who basically plays Mr. Wilson to Dennis the Menace here. Without ever feeling hyperactive, “Timmy Failure: Mistakes Were Made” is one of those quick-witted films in which if one character or plot thread doesn’t work for you, all you have to do is wait a minute for another.

To that end, it does start to feel remarkably episodic. Rising action and momentum aren’t real concerns here, but does that matter in a movie with a cat named Senor Burrito and a giant polar bear that I think only Timmy can see? There are such wonderfully fun little beats in McCarthy’s film, including a great reference to Pixar’s “Up,” which McCarthy worked on, that it’s hard not to just enjoy the film on a beat by beat, scene by scene basis. Does it add up to much? Not really. It’s a fun movie to spend time with, and I don’t think it needs to add up to much more than that. Anyway, we’ll get the serious Tom McCarthy back later this year for “Stillwater.” Let’s just hang out with Timmy Failure and the memorable characters that bounce off him until then.

This review was filed from the 2020 Sundance Film Festival on January 26th. 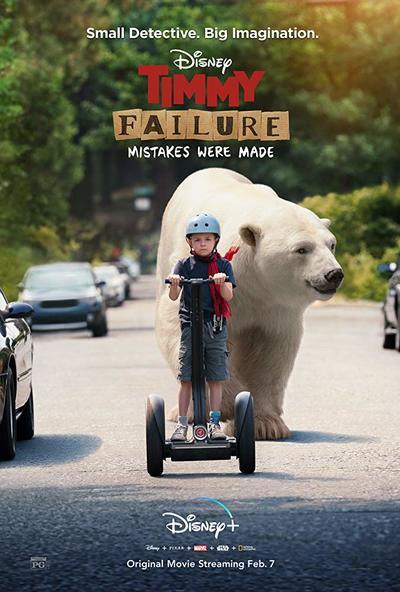 Timmy Failure: Mistakes Were Made (2020)

Rated PG for thematic elements, some language and mild action.