“Togo” (now playing on Disney+) is a smart, affectionately made tale about an underdog and his musher. “Smart” because it shows the dog as both a puppy who's too small for mushing and then 12 years later as a proven leader, steering his sled master Seppala (Willem Dafoe) and other dogs on a journey to bring back a serum to their small Alaskan town of dying children. And the movie is affectionate because it has that sense of animal love that lets entire sequences rest on Togo’s charms, but is by no means letting the dog do all the work. Director Ericson Core (previously of the “Point Break” remake) clearly cares about his animals, and his filmmaking, too.

We all know that Disney would never tell this story if it ended in extreme catastrophe. But this context helps the tension of “Togo,” as it’s comprised of brief rises of conflict during both its past and present parts, which are united with the crystallized message of not giving up in the face of adversity. In the past, it’s lighter, goofier passages of Togo showing how he won't stop proving himself, even if he gets locked into a pen (or a barn) by the curmudgeonly Seppala, who would rather get rid of Togo than believe his potential. (“Saint Francis of Assisi would shoot this dog,” Seppala says, while puppy Togo zips in and out of frame.) Watching the fluffy rapscallion then devise and wiggle his way out of these small challenges is as gratuitous and giddy as any dog lover may hope.

But then in the present, Core fashions some truly thrilling dog sled scenes, honoring the life-or-death aspect of people like Seppala, who enter into the unknown and trust the skills of their dogs to get them to the latest road house. The snowy terrain can be relentless, emphasized early on with a bracing scene that suddenly sees Seppala and his dog crew unwittingly dashing toward a cliff’s edge. And the movie has a bravura scene later on with Togo and crew blitzing across a rapidly breaking field of ice—it feels too close to death in the best way, and it's an incredible example of when green screen usage enhances storytelling. Throughout such lean action sequences, “Togo” has a clear skill for grip-and-release entertainment.

When setting up the drama, it’s the adult aspects that prove to be a little clunky. Seppala and his wife Constance (Julianne Nicholson) are used to create a type of tension within a loving marriage—they disagree about Togo, and later disagree about Seppala taking the dangerous journey—and yet instead of making heartfelt stakes, the bad-theater dialogue will make you wonder, Who talks like that? But Dafoe, whose presence can feel like as much of a treat as close-ups of a cute dog, gets a few good moments—a highlight being a monologue that he mumbles as his dogs zip across the ice, performing it as if it were a cut paragraph from his previous gig, “The Lighthouse.”

If you’re watching “Togo” and the corners of the frame seem a little fuzzier than usual, that’s not your Disney+ buffering, but an inspired choice from Core acting as his own cinematographer. “Togo” often makes the sides of its images look soft, and it helps the movie achieve a suitably more old-fashioned look (as if it were shot with older lenses) but also makes the story feel direct by telling you exactly what to focus on. Whether a scene involves looking at Dafoe's de-aged face or impressive CGI stand-ins for his dogs rushing across deadly terrain, it's proves a fitting visual choice for the streaming experience.

As for the movie’s star, Togo. He is indeed a very good boy, and like any movie animal worth the project named after them, Togo the character feels to be made of more than just select editing and spirited human scene partners. Those two factors are able to make the dog (in both past and present) seem like he is truly reacting to what Dafoe is saying, and establishing his own arc. Togo is independent, persistent, and even has a sense of humor. A bit of the movie magic in “Togo” is that it doesn’t feel like watching a dog who performs brave, heroic acts because he’s obedient, but because he chooses to. 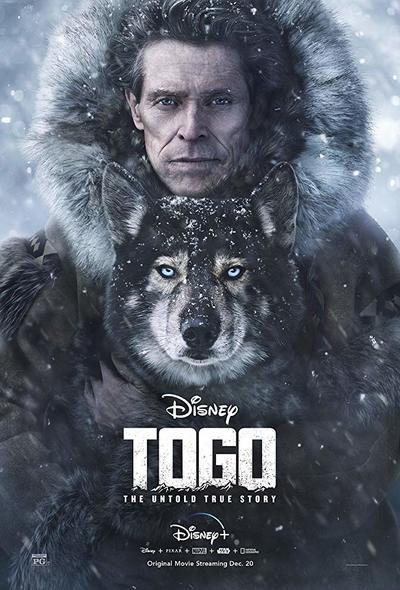 Rated PG for some peril, thematic elements and mild language.