Charles Ferguson’s “Time to Choose” has a very direct mission statement. There’s no time for alternate viewpoints when you’re going to include lines like “We don’t want to fail humanity” in the opening scenes. For Ferguson and co-writer/editor Chad Beck, the subject matter of “Time to Choose” is nothing less than the fate of our children. It’s tempting to ask yourself what has really changed since “An Inconvenient Truth” opened eyes around the world, and countless other climate change docs followed in its Oscar-winning wake, but the main reason that “Time to Choose” feels different and has value is that it actually offer solutions and hope. Most of these “The End is Coming” films spew facts about Greenland’s ice sheet and the vanishing coral reef almost like horror films, leaving viewers wondering what the heck they’re supposed to do about it, especially if they’re not inclined to visit the website thrown up in the end credits of the cautionary doc they just watched. What elevates “Time to Choose,” other than its very strong editing by Beck, is the sense that not only are people doing something to change the trajectory of our planet’s depleted resources but that you can make a difference too.

Of course, the first act of any of these films is terrifying, and Ferguson wastes no time. Water supplies are diminishing; natural disasters are increasing; wild fires are more prevalent; global sea levels have risen by eight inches in record time, leading to “Many of our major cities will be submerged.” And this all happens before the five-minute mark. There’s an impressive “shock and awe” strategy to the opening of “Time to Choose” that almost demands you pay attention. And narrator Oscar Isaac’s soothing yet confident voice helps in that regard as well.

The film is divided into three chapters. In the first, “Coal and Electricity,” Ferguson and Beck start in West Virginia, a part of the country defined by the coal industry. Immediately, they go from the “macro approach” of the impact of their subject on the world and future generations to how depleting the Earth’s resources is changing lives today. We meet a woman with four children who all have asthma because of mountaintop coal removal. Millions of acres of mountains in the Appalachians have been blown up, sending elements like arsenic into valleys that are the source of water for everyone around them. Coal sludge is killing people, and creating a captive labor force in that there’s no other work and no one will buy the houses in this area. And it’s MUCH worse in China, where safety is an afterthought. Black lung is killing thousands; coal mines are collapsing; 10 million people currently suffer from black lung; the average underground coal miner in China has a life expectancy of 49.

Right around the point you’ll want to switch over to clips of puppies and cartoons to stop from crying, the heartwarming classical music kicks in (piano & strings), and Ferguson & Beck very deftly switch to the solution: Wind and solar power, which has killed no one. Renewable energy, which has become competitive with fossil fuels during the production of the film, is now a reality. Ferguson interviews representatives from companies like Solarcity and Sungevity, people ready to replace the electricity sector with a better machine. And, as the film notes, viable solar power has the capability to help end poverty. It would forever change parts of the world that don’t have access to the electricity infrastructure. And while companies like Exxon and Chevron will do a lot to fight it, change is already happening at companies like Google and Ikea, who rely a lot on solar power.

Part two moves to “Oil and Cars,” and one realizes at this point that any of these sections have enough material to fill their own films. Ferguson has a remarkable ability to distill subjects in ways that don’t diminish their complexity, which he did to incredible effect in the stunning “No End in Sight,” still the best doc on the Iraq War in my opinion. In part two and part three (“Land and Food”), Ferguson and Beck follow the same structure—presenting disturbing facts like how oil has taken over the Niger Delta or how 30% of the Earth’s land is now being used for its livestock, and then showing people willing to make changes and how you can do so as well.

So many “Doom and Gloom Docs” artistically present the problems without the solutions. “Time to Choose” isn’t so much an advocacy documentary as it is an activism one, encouraging you to do something about the problem. The title is a bit misleading. It’s hard to watch the film and think there’s any other choice. 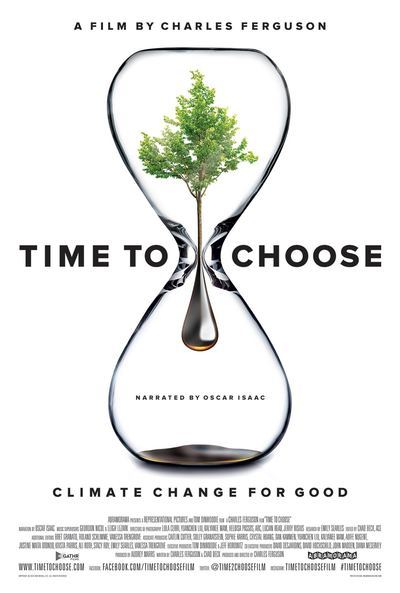 Jane Goodall as Herself

Jerry Brown as Himself

Neal Barnard as Himself