This review was originally published on October 9, 2020 and is being republished for Black Writers Week.

“Time” is an intriguing title for Garrett Bradley’s documentary about Sibil Richardson’s 20-year battle to get parole for her incarcerated husband. The titular noun is open to many interpretations: It could stand for the term describing a jail sentence, or the notion that all a prisoner has in a cell is time or, most devastatingly, how the incarcerated person’s life remains in a holding pattern while time carries life’s events forward on the outside. Kids grow up without parents, spouses endure without better halves, and parents grow older without their children bearing witness. Whatever the director’s symbolic intentions for naming the film, this beautiful and haunting documentary reminds us that there’s a human being behind those prison identification numbers, someone who is loved and is missed.

Bradley uses Sibil’s black and white home movies to show the passage of time. The film starts with one of her six children, Raymond, joking about how many girls he’s going to get on the first day of Kindergarten. We also see Sibil kissing her husband, Robert, in their car, a playful moment where he acknowledges the camera recording their affection for posterity. She will eventually become an advocate for the rights of the incarcerated while simultaneously trying to get Robert’s parole granted. Specifically, she hones in on how people of color receive harsher sentences for crimes than their White counterparts. “Our prison is nothing but slavery,” she tells a group who came to hear her speak. “And I am an abolitionist.”

History and current events remind us that, if you’re Black or brown, your reputation must be spotless. If you are arrested, falsely or otherwise, or killed by police, the first thing the news media and law enforcement do is determine how to discredit you so that it appears you got what you deserved. The company you kept, your youthful indiscretions, or even simply just looking like less than a respectable choirboy put you in the position to be more harshly sentenced or vilified. Felons of any race are often shunned upon release, stripped of much of their humanity even though the debt to society has been paid. They can’t vote, and many places will not hire nor rent to them.

If someone were innocent of a crime, and unfairly sentenced, they would also be subjected to this outcome. Sibil and Robert are guilty, however, so they do not automatically earn the outrage that viewers could engage if they were not. But this film isn’t seeking easy outrage; it’s simply enlisting our empathy and concern while documenting the effects of a corrupt system. It also touches on themes of faith and forgiveness, and the difficulties of cutting through the red tape of the judicial process.

“Time” lets us know early on that the Richardsons did the crime. On September 16, 1997, they pulled a heist at a Shreveport credit union. Before this, they ran the city’s first hip-hop clothing store and were well known in the community. With four kids at home and Sibil pregnant with twins, one can only imagine the financial desperation that led to armed robbery. In the state of Louisiana, the crime earns five to ninety-nine years. On June 15, 1999, Sibil took 12 years in a plea deal and was paroled in three-and-a-half. Robert rejected his deal and received an excessive sentence of 60 years without any hope of parole.

Once released, Sibil returns to her children, moves to New Orleans and begins the fight to get her husband re-sentenced. When we first see one of Sibil’s speaking engagements, she tells the audience that she has been on the outside for 15 years. From here, “Time” concerns itself with the most recent attempt at a potential re-sentencing verdict. Sibil wades through much bureaucracy, from having to wait for days while judges sit on reviewing Robert’s case to falling victim to a lawyer who does nothing yet charges $15,000 for his uselessness. Several scenes show Sibil calmly calling clerks and secretaries to get status updates. She seems unflappable, so when she finally loses composure and lashes out, cursing into the void, it’s a powerful, relatable response.

The footage Bradley presents of the family over the years was shot and narrated by Sibil, a visual record she’s been keeping for the man she has loved since she was 16. These documenting images change quickly, in montage and without any timestamp. Eventually, we realize the youngest twin sons, Justus and Freedom, are about to turn 18 and have grown up without knowing their father as a free man. They’re both college students, sharp and motivated. Though Sibil narrates most of the film, Bradley allows Justus to offer his own words for a few scenes. An older brother, Richard, is shown in medical school. With these scenes highlighting growth and resilience, “Time” refuses to be some kind of tragedy porn. Sibil and her brood demand justice, not pity. Her strength carries the film and elevates her sons toward success.

Most of “Time” takes place three weeks before a parole hearing may be scheduled for Robert. But this timeframe doesn’t play as a suspense thriller with tricks that manipulate one’s emotions. We never see Robert in jail, for example. Instead, the details come and go at the pace of real life, to the point where we feel tethered to the Richardsons like kin, each of us eagerly waiting for news to trickle down to us. Joining us is Robert’s mother, a character who spouts the type of wisdom tempered with tough love that any Black son or daughter will immediately recognize. Her attitude throughout is basically “I support you and I’ll pray for you, but y’all know you shouldn’t have done that b.s. in the first place!” As memorable as Sibil is, her mother-in-law steals the movie.

“Time” ends with a scene that will wring maximum tears of joy from the viewer. But those tears are bittersweet because the one currency humans cannot make more of is time. In a preceding sequence that doesn’t feel gimmicky at all, Bradley runs some of Sibil’s home movie footage in reverse, as if somehow dragging the clock backwards to make up for lost time. It’s a noble attempt that evokes an ethereal sense of grace. The crisp, black and white cinematography makes the entire film feel like a poetic ode to perseverance. The Richardsons will never get the years back that they’ve lost, but we’re left with hope that a triumphant future will stem from their reunion. 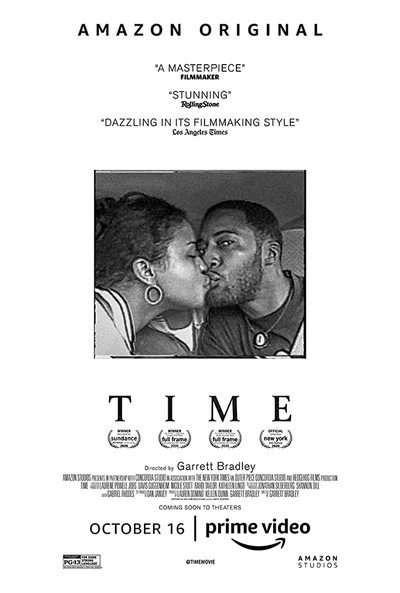 Fox Rich as Herself