Through a Lens Darkly

One of the things I learned in watching Thomas Allen Harris’ engrossing documentary “Through a Lens Darkly”: George Eastman, of Eastman Kodak fame, served on the board of Booker T. Washington’s Tuskegee Institute and in the late 19th century helped the school set up a photography program. That initiative not only reflected black leaders’ longstanding belief that photography aided their cause, it also gave Washington the positive images he needed in taking the case of African-Americans to the world.

At the Paris Exposition of 1900, the educator, then the most famous African-American in the U.S., mounted an exhibit of photographs that showed black Americans as productive, educated citizens not unlike their middle-class white counterparts. Surely the first such display many Europeans would have seen, the show was a hit, and it constituted a potent retort to various exhibits by European powers that attempted to justify their colonial exploitation of Africa by showing Africans as naked, primitive savages needing the “civilized” guidance of their white masters.

It is difficult to cast our minds back to that time and imagine what it would have been like to see such wildly opposing exhibits, but the exercise is instructive, and it’s only one of many occasions for such contemplation Harris’ film offers. Here, as in other cases, the images articulate narratives and entire worldviews that stand in starkly dramatic contrast to each other.

Likewise, the film itself has a dual nature, even if both of its aspects might be united under the heading “family album.” One aspect has Harris pondering the importance of photography in the lives of his and other black families (his grandfather was an avid photographer who gave Harris his first camera when he was six) and the various purposes it served, from recording family histories to helping with the often ambivalent task of reflecting on blackness itself.

The film’s other aspect, inspired by the acclaimed book “Reflections in Black: Black Photographers from 1840-Present” by Deborah Willis (who served as one of the film’s producers), considers the history of photography of and by African-Americans as effectively comprising a kind of family album of the culture. This chronicle produces countless fascinating connections and poses intriguing questions, e.g., was it entirely coincidental that the overthrow of slavery in the U.S. happened at the same time that the still relatively new medium of photography was coming into widespread use?

Perhaps not. While the case against slavery before the Civil War had largely been the province of the written word, by the time Union forces swept through the South as the war raged, photographers who came in their wake recorded the hideously despoiled flesh of whipped slaves, and these images helped explain to Northerners why it was just and necessary to mount a massive campaign against the “peculiar institution.”

After the war, newly freed blacks took control of their own images in two senses. Some learned the trade of photography and created pictures of their communities and acquaintances. And any African-American for a modest fee could have photos made of oneself and loved ones that reflected the subject’s own tastes in poses, attitudes, clothes and settings. The images Harris shows from this period are among the most entrancing in the film, as their projections of self-confidence, personal vitality and style, and in many cases, newfound prosperity anticipate similar displays of exuberant African-American pride following the civil rights victories a century later.

As Harris shows, black leaders understood the importance of such images from early on. That Frederick Douglass became one of the most photographed Americans of the 19th century surely testifies not just to his healthy self-regard but also an understanding of how instructive and inspiring these portraits could be to other blacks.

Yet the photographic and other proof of black talent, aspiration and success prompted various kinds of push-back throughout the Jim Crow era. Cartoons and advertising demeaning to blacks proliferated. D.W. Griffith’s horrendously racist “The Birth of a Nation,” American cinema’s first blockbuster, inspired the resurrection of the Ku Klux Klan, which had been suppressed during Reconstruction. Perhaps worst of all, the lynchings and public mutilations of blacks in different parts of the country inspired a ghoulish mini-industry of postcards showing whites enjoying picnics and laughing festively as blacks were hanged and burned in front of them.

Such horrific images would be used to opposite effect during the civil rights era, however. At the funeral of brutally murdered teenager Emmett Till, the boy’s mother insisted that his coffin be left open so that photographers could record his grotesquely mutilated face. Those images shocked the nation and pointed toward years in which images of peaceful civil rights protestors being viciously attacked by racist Southern lawmen and mobs helped turned the tide of public opinion toward the overthrow of Jim Crow.

In telling this story and exploring its meanings, Harris’ well-crafted film uses interviews with a number of historians and black photographers. But its greatest asset is the trove of photographs it marshals. Sometimes these are so striking and resonant that they almost overwhelm the commentary meant to frame them, including Harris’ voice-over, which occasionally stretches for academic or poetic notes it doesn’t quite reach. Yet the old saw about a picture being worth a thousand words indicates the extraordinary power of the images “Through a Lens Darkly” organizes so thoughtfully and compellingly. 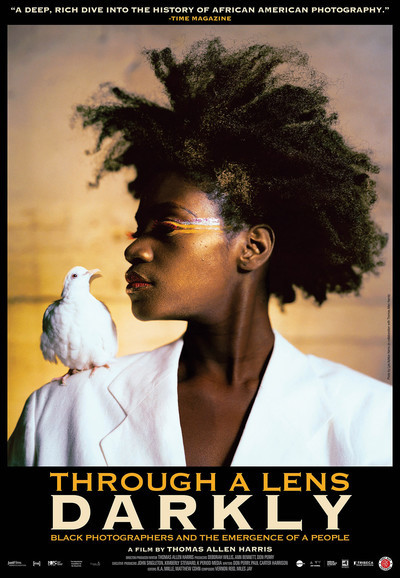 Through a Lens Darkly: Black Photographers and the Emergence of a People (2014)