There’s so much going on in “Three Months,” so many emotional pieces in motion, but very little of it is particularly moving.

“Three Months” refers to how long Caleb (Troye Sivan) has to wait until he finds out whether he has HIV. But that dread, thanks to a broken condom and one night with a stranger, is just one of many things on Caleb's mind as he zips around his Florida town in a tandem bike, a chip on his shoulder and sunglasses over his eyes. He already hates his job at a tourist-friendly convenience store equally known for slushies and tchotchkes, where he works with his close friend Dara (Brianne Tju). And though it’s high school graduation weekend, he’d rather watch from afar in case we didn't already know that he's too cool for school.

Perhaps because the movie is limited on something new to say, it stays busy with its many broad themes related to his coming-of-angst, concerning identity, family, community, friendship, loyalty, pride, etc. Caleb also has to face his estranged relationship with his mother, which is enflamed by the sudden loss of his father; his grandmother (Ellen Burstyn) struggles with moving out of the family home despite constant encouragement from her partner (Louis Gossett Jr.); 18-year-old Dara has a relationship with her boss at work (Judy Greer) that is as concealed as an ajar door. And while attending support sessions for men who live with HIV, he meets a more reserved young man named Estha (Viveik Kalra), who is also awaiting results, and whose homosexuality is a secret to his parents.

The plotting in "Three Months" throws every tear-jerking idea possible at the wall just to see what sticks. But for a movie that already lacks the pep it advertised with its colorful, Little Richard-driven opening, watching all the various lessons of Caleb’s life fall apart as it goes into the third act becomes especially laborious; that Frieder doesn’t make anything particularly wise with his bloated roster of good supporting actors makes it worse. For a story that already struggles to apply enough tension into its titular plot device, these extraneous conflicts have little effect. It takes away from the movie’s potential emotional sweetness, when it already relies on so many cliches and expected situations.

It’s a shame that there are so many weak moments to the story, as it does have standout elements of warmth, directed related to its performances. Kalra, previously seen in the Bruce Springsteen movie “Blinded by the Light,” has a couple of strong emotional beats that give depth to a docile character who approaches his own question with shame. And the scenes with Caleb’s support group can be endearing too, led by a doctor (Javier Muñoz) who welcomes Caleb in and helps keep him calm.

Written and directed by Jared Frieder, “Three Months” proves to be an awfully wobbly star vehicle for singer-YouTube star Sivan, in his first major leading role after a supporting part in 2018's "Boy Erased." Part of the problem here comes from the character, whose own personality can only be surmised in try-hard snarky dialogue or his vintage t-shirt collection. We even learn that Caleb’s dreams involve going to Parsons School of Design, though there’s little emphasis on what he'd do there. At the same time, Sivan doesn't yet have a dynamic dramatic presence, even in the vulnerable moments meant to cut through Caleb's tough exterior and make him more relatable.

For wherever this movie’s best intentions started, it ends up with something that’s thoroughly indie wholesale. Worse, it’s a product from a whole different era, as the film’s setting of 2011 isn’t so much to have a particular influence on the story, but to excuse the elements that don't have an altogether freshness: it has the quirky job setting, the dry wide-shot comedy moments, the gratuitous dance scene, the progressive sexual politics of a movie that would have dreamed of getting into Sundance over a decade ago. Even Caleb’s “Juno”-grade snark is identifiable, but it reads more like a costume than anything else.

But one doesn’t want to be too hard on “Three Months,” because there is a broad value to how it helps normalize Caleb’s experience, and shows different perspectives that can come from it. It’s more that this movie has been made for viewers who aren’t familiar with everything else that happens over the course of “Three Months.” 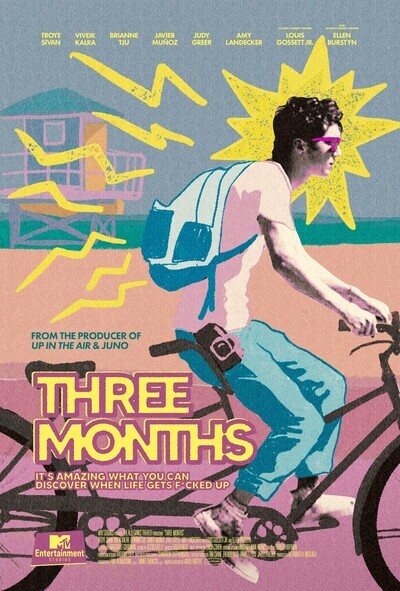