Blinded by the Light

There's a moment in "Blinded by the Light," a new film from writer/director Gurinder Chadha ("Bend It Like Beckham," "Bride & Prejudice"), when the young protagonist, a kid named Javed (Viveik Kalra), watches the video for Bruce Springsteen's "Dancing in the Dark" for the first time. Javed is obsessed with Springsteen's music, but the look on his face as he drinks in Springsteen's powerful meat-and-potatoes stage presence is a visual echo of the awestruck look on Courtney Cox's face as Springsteen pulls her out of the audience in the same video (which was directed by Brian de Palma). It's more than excitement; what Javed feels hits at a deeper level. There's a surfeit of feeling on Javed's face, so perfectly evocative of what it feels like -- particularly as a teenager -- to suddenly get really into something - music, a movie, a celebrity - and that something hits you in just exactly the right way at exactly the right time. It's like having a house fall on top of you. Or mainlining a powerful drug. You never see the world in quite the same way again. That's what Bruce Springsteen did for journalist Sarfraz Manzoor, whose memoir Greetings From Bury Park: Race. Religion. Rock'n'Roll is the basis for "Blinded by the Light" (Manzoor co-wrote the script). "Blinded by the Light," at its very best, captures the experience of being a fan, the pure exhilaration of it, and the sense of your vision opening out to vistas beyond your horizon.

Set in the 1980s in the small town of Luton, Javed's family struggles to make ends meet in the crushing recession of the late Thatcher era, battling economic strife, rising nationalism, and racist attacks. Javed's mother (Meera Ganatra) works out of their home as a seamstress, and his father (Kulvinder Ghir) works at a nearby factory. Layoffs loom. Parental expectation weighs heavily on Javed, who hides not just his dream of being a writer from his parents, but almost every other aspect of his personality. He's not allowed to have a social life, a girlfriend, independence. (Javed's father says to him at one point, "Pakistanis do not go to parties." Javed replies, "I thought I was British.") His best friend Matt (Dean-Charles Chapman) is swept up in the New Wave scene, and Javed writes lyrics for Matt's songs, feeling frustrated and trapped.

Bruce Springsteen isn't a presence at all in these early sequences, an accurate representation of what it was like in the early 1980s teenage music scene. Maybe your dad had Born to Run, or Nebraska in his collection. But Springsteen was from the past, he had nothing to do with "now." "Now" was Madonna and Prince and Pet Shop Boys and Tiffany and Michael Jackson. That is, until the 1984 juggernaut of Born in the U.S.A., filled with catchy tunes, but seething with political and social anger. The album is a real rager, verbalizing the loss, hardship, and poverty of the American working-class as Springsteen saw it all around him. (The xenophobes who consider "Born in the U.S.A." their anthem clearly haven't listened to the actual lyrics of the song).

One day, a Sikh classmate named Roops (Aaron Phagura) hands Javed a couple of Springsteen cassettes, sensing the troubled Javed may need it. As Javed listens to "Dancing in the Dark," his entire inner life explodes in a moment of revelation, reflected in the outer world as a gigantic wind storm wreaking havoc in his neighborhood (the Great Storm of 1987). It's like Springsteen himself created that apocalyptic storm. As Javed listens to “The Promised Land,” Springsteen's lyrics float through the air, projected onto the sides of buildings, walls, the music literally actualized in the air, in Javed's world. Javed never knew music could be like this, that music -- made by an American guy from some place called New Jersey -- could speak so directly to him, the son of immigrants in far-away England. Javed becomes an evangelist for Bruce. He dresses like him. He commandeers the school radio station. He plasters his wall with posters. His parents think he has lost his mind.

People make fun of teenagers for this kind of thing, but the emotions of fandom are so pure! The root of the word "fanatic" is "fanum" -- meaning "temple," a place where zealots come to worship. Every fan has their deity, whether it's the teenagers in Robert Zemeckis' "I Wanna Hold Your Hand" trying to score tickets to the Beatles' appearance on "The Ed Sullivan Show," or the Elvis-obsessed Japanese teenagers wandering around Memphis in Jim Jarmusch's "Mystery Train." Javed's discovery of Springsteen's music leads him into all kinds of unexpected terrain, a tentative romance with a classmate (Nell Williams), conflict with his father, and tension with his best mate Matt.

There are exuberant sequences in "Blinded by the Light" that are basically from out of a movie musical. Entire village squares erupt into coordinated dance movements. It's cheesy, but it's infectious too. If you haven't been a fan of something to such a degree that it transforms your whole entire world, you're missing out! Springsteen allowed use of his capacious catalog, so his songs dominate throughout the film. Chadha's approach is open-minded and affectionate, and it's also filled with sharp insights about growing up the child of immigrants. There's a great sequence involving Javed's sister Shazia (Nikita Mehta), who is not quite as obedient as she seems to be on the surface. Like "Bend It Like Beckham," "Blinded by the Light" is very smart on the tensions within an immigrant family, the push of the younger generation to assimilate, the fears of the older traditional generation of loss of their culture.

All of the actors are wonderful, but Kulvinder Ghir is especially poignant, bringing a potent blend of gravitas, pain and humor to his performance. This strong proud man doesn't understand the Springsteen thing. He doesn't like what he doesn't understand. He fears losing his job. Seeing him humiliated is extremely painful. The entire family is affected by the father-son clashes. Among its many other positive attributes, "Blinded by the Light" is an emotional father-and-son relationship drama. Holding it all together is Bruce Springsteen's music.

Recently, my sister and I took her two kids, ages five and three, to a local pool. On our way there, they chanted from their car seats in the back, "Fire Song! Fire Song! Fire Song!" I assumed it was a kid's song learned in pre-school. Turns out they were requesting "Dancing in the Dark," which they call "Fire Song" ("You can't start a fire/You can't start a fire without a spark"). The kids heard the song once on the radio, and became obsessed. They know all the words. They wonder if "Bruce" can come over and play a song in the backyard. The weirdest thing is that the "Bruce" thing was not imposed on them by my sister. The kids chose him all on their own. The torch has been passed. 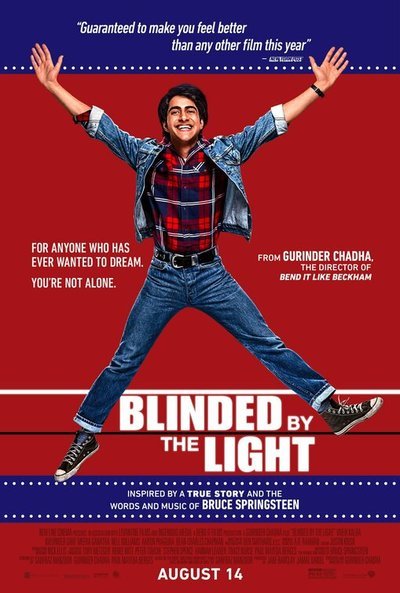