I have a vague personal recollection of this story when it first hit the New York, and then the national media, in the early 1980s. I was living in New Jersey, not far from where it was unfolding, and was just a couple of years older than its subjects. Three identical twins who, through being mistaken for each other on nearby college campuses where they were just starting out (the full story is a little more complicated, but bear with me, and in any event the movie tells it in detail), discovered each other and began the fraternal relationship they’d been without for almost two decades.

Edward, Robert, and David all have different last names, having been adopted by different families. Their households were upper-middle class, middle class, and working class. While Edward’s dad was a disciplinarian, David’s father ended up being equally beloved by the reunited brothers; the man was called “Bubbalah” by all. Despite their differences in upbringing, the twins had remarkably similar mannerisms, smoked the same cigarette brand, had the same taste in women, and so on. All of which was catnip for People magazine, "The Phil Donahue Show," the "Today" show, and many other programs.

Tim Wardle’s documentary, “Three Identical Strangers,” contains archival footage from all those shows and more. These guys were hard to miss at the time. As I mentioned, I heard of them, and my general impression was, “Well, good for them, but also the whole thing looks a little goofy.” My general disdain for my own demographic peer group was hardly unique.

During the first hour of this movie, my perspective, while more benign than it was back in the day, still tilted toward “Well this is all very nice but what’s the point?” Is the whole movie going to be archival footage of these big grinning doofuses running around early-'80s NYC accompanied by “Walking on Sunshine” on the soundtrack?

Well, no. It sure is not. And one thing that will tip you off is that only two of the three triplets appears in contemporary interview footage. “Three Identical Strangers” takes a dark turn, not just into dysfunction and tragedy but into outright conspiracy.

Wardle uses a strategy that other documentary directors might not agree with ethically, but works a treat as a narrative. He withholds one crucial element of the early lives of the separated triplets, dropping it in once it is revealed that the adoption agency that placed the kids, and placed a larger group of separated twins, did so with a specific agenda. I don’t want to give away too much, but suffice it to say that the class status of each of the families these triplets were placed in was no accident.

A part of Edward, Robert, and David’s story has been told in print by New Yorker investigative journalist Lawrence Wright, author of The Looming Tower and Going Clear. I had not read Wright’s articles on the subject, so in a way I was the ideal viewer of this movie: my vague recollection of the more pop-culture friendly story was put aside for a “whatever happened to” question, and that question gets answered in a way that wrenches, startles, and eventually produces a sense of righteous indignation. With its frequent dramatizations, zippy editing, and song-driven soundtrack, “Three Identical Strangers” may be said to indulge in the most potentially egregious of mainstreaming devices used in contemporary documentaries. Yet because the story itself is so, well, juicy, and the subjects one-time pop culture phenoms, the approach feels acceptable if not entirely “right.” And all of those considerations are eventually subsumed by a hope that the movie’s subjects, good people all, get some answers and some justice. 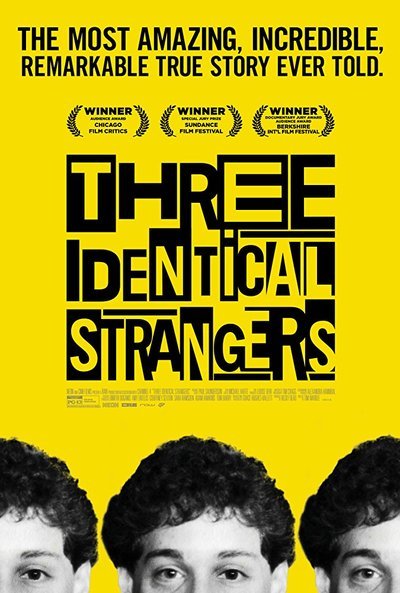