Hannah Faber (Angelina Jolie) is a hard-drinking, hard-living one-of-the-boys smoke jumper, one of those daredevil firefighters who drops off helicopters into the middle of burning forests. The job attracts a certain kind of person, and Hannah, by the looks of her when we first meet her in "Those Who Wish Me Dead" is that kind of person. She has a reputation for being crazier than the rest of them, so "crazy" that she flunked her last psych-eval after a catastrophic failure of judgment during a fire which resulted in the deaths of a couple of kids. In the meantime, she's been demoted (as she sees it) to one of the fire towers, standing like a lonely outpost in the middle of the forest along the Continental Ridge, where her job is to monitor the weather and keep a lookout. She's rattled by PTSD, and yet she wants back in the action. The situation in "Those Who Wish Me Dead," adapted from the novel by Michael Koryta, gives her more than an opportunity to prove herself.

This is all potentially interesting stuff, and it's right in Jolie's wheelhouse. She's tough but wild, strong but vulnerable. She is drawn to playing broken people who find their resilience. "Those Who Wish Me Dead," directed by Taylor Sheridan, whose screenplays for "Sicario" and "Hell or High Water" show his gift for mixing taut thrillers with complex character studies, gives us the bare bones of Hannah's "issues." But the film leaps around so much, working to incorporate multiple narratives, including a massive forest fire, and tossing it all together inhibits the kind of emotions a film like "Those Who Wish Me Dead" requires. The movie feels like a throwback to the disaster films of the 1970s, like "The Poseidon Adventure" or "Towering Inferno," where character development is cursory at best, since the main game is the disaster unfolding around the characters.

The inciting event of "Those Who Wish Me Dead" takes place far away from the forest in question. A "forensic accountant" named Owen (Jake Weber) flees Florida with his young son Connor (Finn Little), when he realizes that "bad guys" want to kill him for uncovering shady political finances in his work for the District Attorney. A more cold-blooded duo than this pair of clean-cut murderers can barely be imagined. Played by Aidan Gillen and Nicholas Hoult, they are as relentless and inhuman a force as the forest fire they start deliberately for reasons which are unclear to the extreme. They figure out (somehow) that Owen is probably headed to the wilds of Montana to hide out with his brother-in-law, and they follow in hot pursuit. During the breakneck journey, young Connor ends up in the middle of the Montana woods, scared and alone, desperate to find help. He does, when he comes across Hannah, isolated in the fire tower in the middle of nowhere.

The relationship that develops between Hannah and the child has a lot of potential. She thinks she might have a chance at redemption: Connor is around the age of the boys who died in the fire. But the film is very busy leaping around to other events and other characters, like Owen's brother-in-law Ethan (Jon Bernthal) and Ethan's pregnant wife Allison (Medina Senghore), wondering why Owen and Connor haven't shown up. Ethan and Allison are a fascinating pair, and their dynamic is so intriguing it rivals what's going on with Hannah and Connor out in the forest. They could carry their own movie, these two. Allison "runs a survival school," but that information comes in a throwaway line—so quick you might miss it. It's important information, which will come in handy later. More should have been made of this.

There are several effective action sequences, the best showing the terrifying way that fires actually run, and pick up speed, particularly on slopes of land, sending Hannah and Connor running for their lives. More could be made of Hannah’s competence at her job, and more could be made of the smoke jumpers’ special capabilities and skills, for audience members who aren’t aware of it. Kathryn Bigelow pulls off this complicated feat in films like “The Hurt Locker” and “Zero Dark Thirty,” and, in another kind of movie, in “Point Break,” where what really engages Bigelow is not character so much as the jobs that people do, and how those jobs create their own culture, requiring personality types who don’t really fit into “normal” life. This is the world of “Those Who Wish Me Dead,” but it’s sketched-in rather than explored.

There was a very interesting period in the early-to-mid 2000s when Angelina Jolie alternated between serious dramas and action movies, attracting the widest of audiences, and dominating the industry cross-genres in a way few actresses have pulled off (Sigourney Weaver comes to mind as a possible equivalent). Jolie's star power is a force of nature, one she is able to use to great effect. I was practically alone in falling in love with "By the Sea," the film she wrote and directed, a throwback to the glamorous disaffected European dramas of the 1960s and 1970s, directed by people like Michelangelo Antonioni, or Jean-Luc Godard's "Contempt," a clear precursor for "By the Sea." In it, Jolie indulged her penchant (and gift) for melodrama, as well as glamorous and yet the-real-deal suffering, putting her in the company of movie goddesses of yore, like Elizabeth Taylor or Monica Vitti. Jolie can be a divisive figure, as most individualists are, and therefore it's always interesting to see the projects she lends her talents to. It's been some years since Jolie did an action movie, and she carries the center of "Those Who Wish Me Dead." Unfortunately, it's a film with no real center.

Now playing in theaters and available on HBO Max. 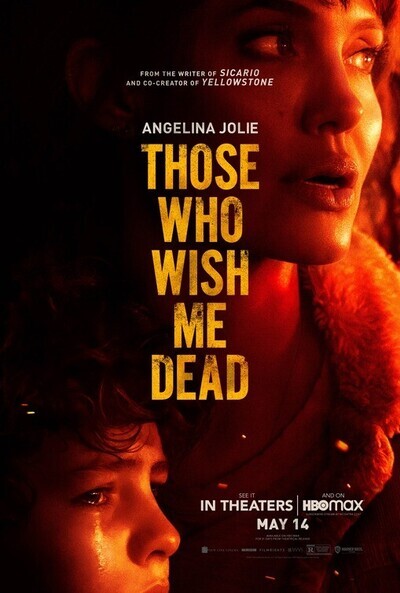