More than a mere concert movie, the excellent “This Much I Know to Be True,” on Mubi today, is a collaboration between three artists—Nick Cave, Warren Ellis, and filmmaker Andrew Dominik. The director worked with Cave before on the stunning “One More Time with Feeling” and continues what feels more like an artistic union than simply a musical document. Once again, he captures how Cave and Ellis almost seem like they’re channeling something bigger than themselves. Cave always felt like an old-fashioned conjurer, someone who allowed the spirit to move him on his early albums with the Bad Seeds. Since the tragic death of his son in 2015, his music has found a different register, something that seems to be grappling with existence and meaning in ways that musicians rarely do. His most recent albums with The Bad Seeds (the masterpiece Ghosteen) and just Ellis (Carnage) come to life in this film, shot on location in London and Brighton.

Filming in Spring 2021 before Cave & Ellis were to go on tour, “This Much I Know to Be True” opens with an unusual prologue wherein Cave jokes that he’s going to transition from music to ceramics, showing off a series he made about the devil. Through a display of his work, a narrative unfolds about the existence of the devil. No matter what Cave does, he’s telling a story, whether it’s through ceramics or music, and everything he’s done recently feels like it’s reaching for something true about the human condition. Some of the best moments in “This Much I Know to Be True” reveal the organic nature of Cave & Ellis’ process, in which they work on songs in a way that's more like pulling them out of the air instead of it being put on the page. More than the previous Cave films, “This Much I Know to Be True” clarifies the dynamic between Cave & Ellis, and how essential the latter is to these songs.

Of course, most of “This Much I Know to Be True” is music. Dominik sets up a circular track for his camera in the rehearsal space, which has a soft white light on the top third of the screen that adds to an almost holy nature of the recording. Dominik and his brilliant cinematographer Robbie Ryan (“The Favourite”) move their camera around the room in a way that's in tune with the performances, whether it’s sweeping in on a falsetto note or staying static on an emotional moment. “This Much I Know to Be True” is masterfully directed, an example of when a filmmaker and a musician are working in unison creatively instead of just going through the motions.

There are carefully considered interludes between the songs of “This Much I Know to Be True.” In one, Cave discusses his work with The Red Hand Files, a way that he communicates with his fans about his work, his grief, and the meaning of life. Cave says that the project has made him a better man, and one can see that in his work. For Cave, and a lot of artists and other sensitive souls, life is a search for truth. I read the title of this film as a reflection of that endeavor. All Nick Cave knows to be true is in his art, the music that digs deep into emotional reservoirs for both the performer and the listener to find something that can’t be expressed any other way. That’s a special kind of truth. 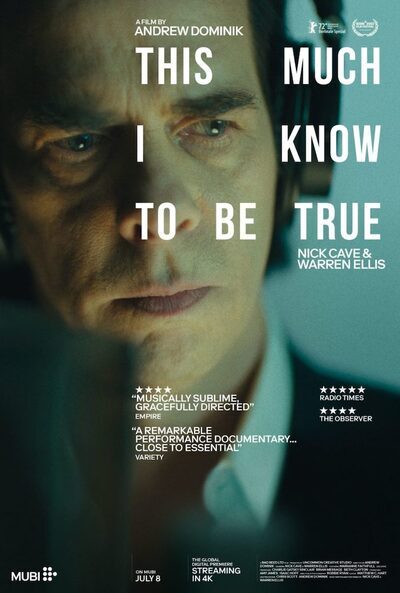 Nick Cave as Self

Warren Ellis as Self

Earl Cave as Self

Andrew Dominik as Self

Marianne Faithfull as Self