This is Bossa Nova

By the end of the very musically-inclined documentary “This Is Bossa Nova”—which withholds the image of someone playing guitar by the sunset for the last five minutes—its title proves to be more than just descriptive. In one sense, it is frank, a la “now, THIS, ladies and gentlemen, is bossa nova.” But for a documentary that encompasses all major players, tunes, and movements of the genre, it is also justifiably encyclopedic.

Director Paulo Thiago’s film (“Coisa Mais Linda: Histórias e Casos da Bossa Nova”) also has the subtitle of “The Histories and Stories,” a generalization it takes rather seriously when providing all contexts to the ballad samba spin-off sub genre, often of a laid-back yet rhythmic, jazz-chord-driven romance. Featuring an array of talking heads from people directly involved in the scene that started in the late 1950s, Thiago notes on the different places, faces, ideas—even different guitar plucking methods—behind bossa nova as a Brazilian cultural phenomenon and everlasting genre of gorgeous musical expression. Although the likes of arguably the biggest names like singer João Gilberto and composer Antônio Carlos Jobim are not in the film (one is a known recluse, the other passed away in 1994, respectively), the documentary feels to capture the genre’s headspace and the scene. Performances are used as extended footnotes for mentioned song titles, sometimes performed by the people who did them originally (as with talents like Wanda Sa, or Johnny Alf).

In simply-orchestrated passages where genre fixtures like Carlos Lyra and Roberto Menescal just happen to be openly reminiscing about their genre’s past, the storytelling is appropriately acoustic. A key dash of musical romance involves Menescal recounting his first meeting with bossa nova, standing in an apartment and talking to us as he’s giving a tour through a memory. The camera then follows him out onto the apartment’s balcony, where two notable men from the genre are in the corner playing “Sente”; with no special effects needed for this flashback, Menescal completes the reenactment by standing back, listening.

The documentary really picks up about 60 minutes in when it focuses on Gilberto and Jobim, whose professional success gives opportunity for unique footage of bossa nova performances. A particular gem involves Gerry Mulligan riffing with Jobim in New York City, trying to program his American jazz sensibilities different rhythms required of the bossa nova form. Another involves Frank Sinatra playing “The Girl from Ipanema” (a bossa nova greatest hit), opposite Jobim himself, from an album they recorded together in the 1967 (“Francis Albert Sinatra & Antônio Carlos Jobim”).

“This Is Bossa Nova” is unfortunately more concerned with pleasure of sound over sight, with numerous moments in which its visual sense can fall out of tune. Subtitles can be sloppy and are rarely offered for songs, historical photos are shuffled around without any personality, and the formats change from a sharp digital image to fuzzy video. The most stable aesthetic might come from the documentary’s commitment to musicianship, giving close-ups to smooth hands during busy chord progressions, or sometimes allowing one guitar and one voice to fill a room in a delicate medium shot.

The overall length of “This is Bossa Nova” would be a problem too if the effect of bossa nova weren’t so pertinent—Thiago’s film is a delightful showcase of gentle protagonists and their intricate yet seemingly breathless harmonies. It captures bossa nova as a movement that lives on decades later in its legends, and shares that warmth in bundles. At the very least, it’s a musical genre well worth diving into, or even better, listening to for two straight hours. 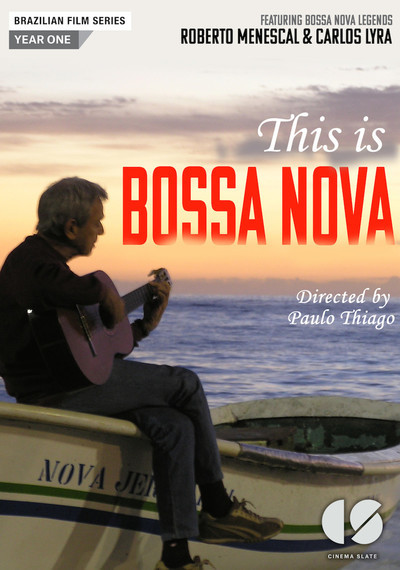