Beware when a writer is the focal point of a movie. Chances are that we are being invited to peer into the scarred psyche of the scribe behind the work, whether we want to or not. Sometimes gaining access to such a private portal can be fascinating, as was the case with "Adaptation," "Sunset Blvd." or even "The Shining."

But with "Third Person," a metaphor-laden title that offers a nudge to the ribs of what lies ahead, the premise of a celebrated yet struggling scribe who steals the very words out of the mouths of acquaintances for his new expose on love, trust and guilt becomes an overreaching exercise.

Occasionally, sparks do fly thanks to the high-caliber cast, especially the electricity generated by the under-the-gun Pulitzer-winning novelist in the form of Liam Neeson—nicely showing his softer side after too many empty-calorie action thrillers—and Olivia Wilde as a journalist who is his tempestuous protégé and mistress. But also, somewhat surprisingly, there is contentious heat between Maria Bello’s lawyer and Mila Kunis as a luckless client who is enmeshed in an ugly battle over child visitation rights.

But as the plot moves in and out of a trio of tales that unfold in Paris, Rome and New York, this layered melodrama strains for emotional impact with only occasional success while eventually blurring into an overlong and contrived parlor trick. By the end, the gimmick overwhelms the telling, causing us to expend too much energy into figuring out the connections between the characters instead of simply being drawn into their predicaments and empathizing with them.

Director/screenwriter Paul Haggis was somewhat unfairly vilified almost a decade ago when his similarly multi-storied "Crash" bested the expected Best Picture winner "Brokeback Mountain" at the Oscars. The blame for that outcome, of course, should have been aimed at the timid academy voters. Still, some have claimed that "Third Person" reflects his response to having to cope with the aftermath of that career peak (which followed his 2004 Oscar win for his "Million Dollar Baby" script) as well as his recent status as a Scientology dropout.

This time, instead of making a social statement such as "Crash" did about racial tensions and police corruption in L.A., Haggis zeroes in on tenuous relationships that are beset by coincidences—between spouses; between parents and children; between strangers; between lovers. In every case, a third person tends to intrude and further complicate matters.

Neeson is ensconced in the City of Lights as he toils over his latest tome, trysts with his comely and much younger paramour Wilde (whose performance highlight involves her giddily racing naked through the hallways of a swank hotel after Neeson cruelly strands her outside his room) and deals with the drowning death of his son while on the phone with his unduly understanding back-at-home wife (Kim Basinger).

In Rome, Adrien Brody is a disgruntled businessman, involved in the purloining of fashion designs to facilitate sweatshop knockoffs, who meets an alluring Gypsy lady from Romania (Moran Artias, who appeared on the TV series based on "Crash") in a bar. He eventually learns her daughter is being held for ransom by human traffickers. Or maybe not.

In New York, James Franco basically plays a more disagreeable version of his own persona as Kunis’ disapproving ex-husband, a famous artist whose claim to fame is painting with his hands. Meanwhile, he has found the perfect calm and comely model girlfriend to replace his volatile former spouse, a failed soap opera actress who is forced to take a job as a hotel maid.

These melodramas initially feel separate but eventually interconnect in ways that are at once both frustratingly subtle yet obvious. One character takes off an article of clothing, while another does the same in the next scene. A copious amount of white roses in vases elicits different reactions in Paris and New York. Similarly, a scribbled slip of paper in one hotel room makes a transcontinental journey into another. The sounds of water and the words “Watch me” are repeated. And there obviously must be a reason why Bello and Basinger, both long-haired blondes, look so similar. But Haggis waits so long to provide our “a-ha” moment, it can’t help but underwhelm.

Maybe "Third Person" could have worked better if the men weren’t such self-absorbed control freaks and the women weren’t such willing victims. There is this one line of dialogue that has haunted me: “Women have the gift of being able to deny any reality.” I don’t know if that is necessarily the case. Strong females regularly face and even overcome the harshest of truths all the time. Except in this movie perhaps, where the observation still sounds like misogynistic nonsense. One reality that I can’t deny? Though it scores some points for ambition, "Third Person" is ultimately a disappointment. 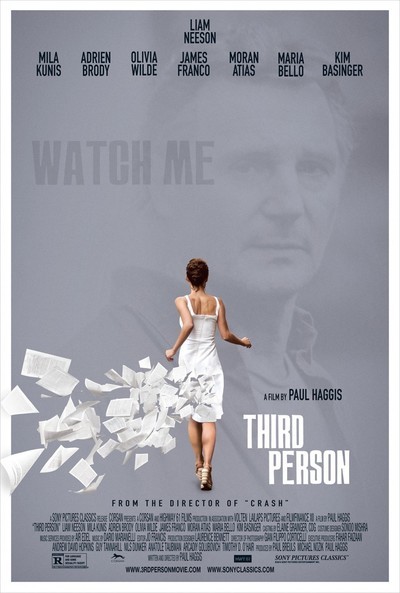 Rated R for language and some sexuality/nudity