They Call Us Monsters

“You’re supposed to love your father because your father loves you. How can any man that loves you tell you anything that’s wrong?”—Archie Bunker (Carroll O’Connor) in the 1978 “All in the Family” episode entitled “Two’s a Crowd”

With these words of unguarded honesty, new depths of humanity were illuminated in O’Connor’s prejudiced anti-hero, illustrating how his beliefs have been passed on through generations. It is the moment that moved the show’s creator, Norman Lear, to tears upon revisiting it in Heidi Ewing and Rachel Grady’s documentary, “Norman Lear: Just Another Version of You,” and it also sets the tone for another invaluable nonfiction work, “They Call Us Monsters,” the debut feature of Norman’s son, Ben Lear. Though his abilities as a filmmaker are entirely distinctive, Lear shares his father’s gift for bringing dimension and context to people widely deemed by society as monstrosities. He enters the doors of a juvenile hall in Sylmar, California, and finds Jarad, a young man who, at age 12, witnessed his stepfather attempting suicide by stabbing himself in the chest. The stepfather is certain that his actions caused irreparable damage to his son, and can’t help bursting into tears in court as the sentencing is issued for Jarad, who smirks in disbelief. It is clear that these kids are imprisoned in more ways than one.

Antonio, one of Jarad’s inmates, is blindsided by the news that he will be a free man. He speaks with renewed hope about providing his friends at the juvenile hall with a larger-than-life example of the success that they can aspire to achieve, transforming himself into a heroic figure on par with the “blue people in ‘Avatar.’” Yet when he returns to life beyond the prison walls, he finds himself in a house overflowing with toddlers that is destined for eviction. Suddenly, Antonio is homeless, left with little to do but get high and potentially wind up back in jail. It is utterly despairing to observe the cyclical fate of youth in broken communities where impoverishment breeds rage, resulting in the self-destructive outlet of gangs. The members of these gangs are as much victims as they are perpetrators, willfully ignored by a society that has allowed the problems in their communities to fester indefinitely. How can youth be expected to rehabilitate when they have no resources at their disposal? Lear takes this question and weaves it into the greater proposal made by Senate Bill 260, which seeks to give offenders, who committed a crime as minors, the opportunity to work toward parole. Whereas Werner Herzog’s “Into the Abyss” advocated against the cruelty of the death penalty, Lear’s film argues that even criminals charged with murder at age 17 or under shouldn’t be tried as adults and faced with irrevocable life sentences.

There is nothing fair about the lives of these juveniles, but there’s also nothing fair about the fate of a young woman left wheelchair-bound by one of Jarad’s alleged bullets. Lear and editor Eli Despres attempt to build a well-rounded portrait of their subjects’ plight, compiling footage of court hearings and testimonials from their respective families, as well as a key interview with the aforementioned victim. Yet I believe there’s an alternate cut of the film that could’ve easily been contained within the prison itself, focusing solely on the sessions between the juveniles and screenwriting teacher Gabriel Cowan. An accomplished filmmaker in his own right, Cowan is also on the Board of Directors at InsideOUT Writers, a nonprofit that conducts writing classes at juvenile halls. He has volunteered to help these kids craft a script inspired by their own experiences, which he will subsequently direct as a short film. Anytime the documentary cut away from this narrative thread, my heart sank, and with the running time barely clocking in at 80 minutes, it left me wanting many more scenes between Cowan and the kids. What he is giving them is an outlet not only for their creativity, but for their pent-up emotions that would normally lead them toward making bad choices. I was reminded of Destin Daniel Cretton’s great 2013 gem, “Short Term 12,” where counselors at a foster care facility encourage the teenagers in their care to express themselves, whether it be penning a rap song or writing a story with metaphorical flourishes.

The most touching scenes in Lear’s film center on Juan, the other juvenile tasked with coauthoring the script. He has a baby son waiting for him at home, though his chances at fathering him in America are rendered impossible by his sentencing, which requires him to be deported as soon as he leaves prison. There’s an especially heartrending shot of Juan’s little boy walking between his father’s legs bound with shackles. When Cowan asks him about his fears, Juan opens up about a close friend that he had always lusted after in secret, afraid that she wouldn’t have the same feelings for him. This woman ends up inspiring one of the characters in the completed film, which Despres cuts to in fleeting edits, as if the vivid imagery has leapt straight from the writers’ imaginations. Cowan even recruits actors Nate Corddry and Nora Kirkpatrick to act out scenes from the script while under the kids’ direction. Hearing his own words delivered back at him, fraught with his own insecurities, proves to be painful for Juan, and in a sequence of aching vulnerability, he calls his friend from prison and is able to finally come clean about his feelings for her. Instead of merely confessing, Juan uses the scenes from his film to describe his long-suppressed infatuation, demonstrating how art can bring into light what is otherwise left in the shadows.

There’s a considerable amount of catharsis in “They Call Us Monsters,” but it is bittersweet at best. If there were more programs like InsideOUT Writers existing outside of prisons, less kids would likely be susceptible to the seduction of gangs. Looking back on his multiple awards for academic excellence and inclusion on the Honor Roll, Juan wonders aloud how he wound up behind bars. He recalls the competitiveness that he felt with his brother that fueled his desire to prove his superiority as a gang member. “I really was a monster,” he replies, frightened by his own capacity for violence. How wonderful that people like Cowan have devoted their lives to reminding kids like Juan that they have a capacity for so much more.

Prayers for the Stolen 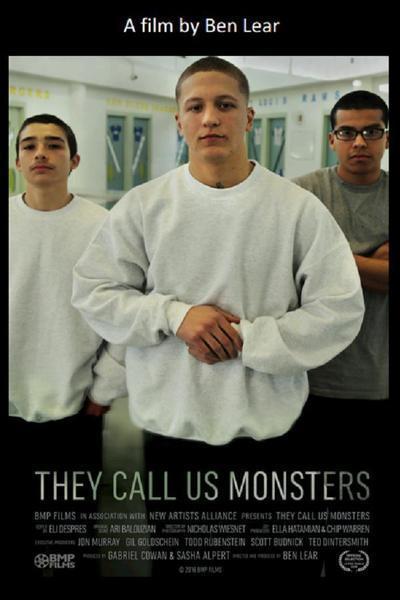