There have been any number of cinematic depictions about how we might find ourselves living out the last few days before the imminent annihilation of our planet, ranging from the quiet reflection of the Canadian drama "Last Night" to the overblown nonsense of the disaster epic "2012" to some simple canoodling with Keira Knightley in the quirky comedy "Seeking a Friend for the End of the World". The latest film to present viewers with a look at the final hours of mankind is an Australian import titled, appropriately enough, "These Final Hours" and while it does have a few things of interest going for it, this low-budget effort ends up arriving at its necessarily predictable conclusion in too many unnecessarily predictable ways.

As the film opens, an asteroid has just landed in the North Atlantic and kicked off a firestorm of destruction that has already taken out huge chunks of the civilized world. In Perth, Australia, the approaching firestorm is set to arrive in about 12 hours and the mood of the remaining populace veers between grim resignation (with suicides aplenty) and a determination to make Earth's remaining moments play out like a mash-up of "The Road Warrior" and "The Purge." Our anti-hero, James (Nathan Phillips), is leaning more towards the latter and after a farewell snog with girlfriend Zoe (Jessica de Gouw), he decides to leave her alone so that he can spend the rest of his time at a wild bacchanal thrown by friend Freddy (Daniel Henshall) with his other girlfriend, Vicky (Kathryn Beck) and not even her revelations that she is pregnant can convince him to stay. He wants to get messed up because, as he puts it, "I don't want to feel a thing."

James heads off to the party that he has placed above everything else, and after getting waylaid along the way, he sees a little girl who has been abducted by a couple of depraved weirdos for presumably unspeakable reasons. Despite his insistence that he no longer cares about anything, he rescues the girl, Rose (Angourie Rice), and when he is unable to reunite her with her father, he decides to take her along to the party in the hopes of finding someone there who can take her to be reunited with her family. Needless to say, as they go along their trek, the two bear witness to any number of horrible sights but Rose's optimism and innocence in the face of the oncoming apocalypse (Spoiler Alert!) begins to change his cynical soul. Once they arrive at the party—an orgy of open sex, prodigious drug and alcohol abuse and bouts of Russian Roulette—he discovers that nihilism may no longer be his thing and tries to get Rose back together with her family and settle his own outstanding emotional debts before it is really too late.

Written and directed by Zak Hilditch, "These Final Hours" is more ambitious than its presumably inexpensive origins might suggest but this is the kind of storyline that has been done dozens of times before and even the better parts of this effort contain more than a whiff of the familiar. The finale, for example, is presented in a relatively striking manner but anyone who has seen the vastly superior apocalyptic drama "Take Shelter" will no doubt notice a number of similarities between the two climaxes. Likewise, the relationship between Phillips (whose presence here, following on the heels of appearances in such films as "Wolf Creek," "Snake on a Plane" and "The Chernobyl Diaries," marks him as one of the guys you least want to have with you on a cinematic excursion of any duration) and Rice doesn't really hit any overtly wrong notes but nevertheless fails to break any new ground either. Even the end-of-the-world blowout is nowhere as decadent as one might hope—from what we see, it basically feels like Burning Man sans the morning-after hangovers—and when it does threaten to become transgressive, as when little Rose is dosed with Ecstasy and begins tripping, it pulls back the reins before things can get too weird.

"These Final Hours" has a couple of things in its favor. Sarah Snook, who delivered such an amazing performance in the recent sci-fi mind-bender "Predestination," shows up in a brief but frighteningly vivid part as a grief-stricken mother convinced that Rose is actually her late daughter and Lynette Curran has an equally strong scene as James's estranged mother, who plans on riding out the end with some wine and a few jigsaw puzzles. Visually, the film looks far more expensive that it probably was and there are some admittedly arresting images scattered throughout. However, none of these elements are enough to make you forget just how profoundly familiar the rest of it is.

"These Final Hours" is not without merit but if you pick only one Australian-made apocalyptic road movie to see in 2015, my guess is that you should probably save your time and money and just wait a couple of months for "Fury Road" to arrive. 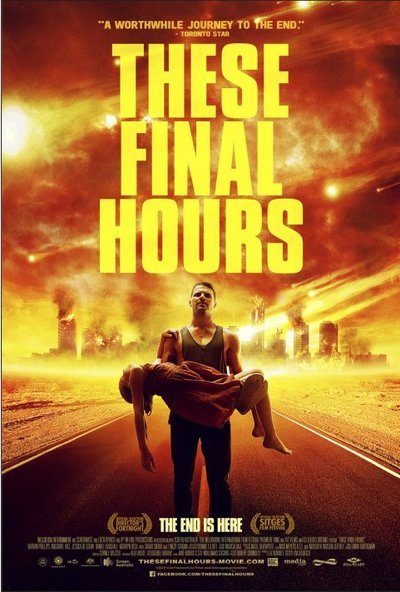