Raoul Peck is on a roll. The Haitian director raised some consciousness with last year’s James-Baldwin-speaks-to-today-in-his-own-words documentary “I Am Not Your Negro.” And now there’s this, a bold, some might say dialectical exercise. That is, an account of the title character’s life and thought in the packaging of a conventional and possibly sentimental biopic.

The movie begins with a text account of the industrial revolution’s creation of a working class called “the proletariat” in Marxist thought. Then, in 1843 German, a Marxist parable, in which poor folk are slaughtered for the crime of collecting deadwood in a forest. 25-year-old Marx writes incendiary articles for the Rhineland News, and upon arrest, agrees to follow a wealthy patron, Arnold Ruge, to Paris to work on his post-Hegelian philosophy and stuff. The action moves to Manchester, England, and a sewing-thread factory owned by Friedrich Engels, Sr. Junior, his wide-eyed son, has no use for his father’s autocratic mien and mistreatment of workers, and one of the movie’s most audacious scenes in staging the meeting of young Engels and his future partner Mary Burns, a working class woman with then-radical ideas, as a kind of meet-cute on the father’s factory floor in the middle of a walkout.

In Paris, Marx struggles, unpaid by Ruge, unable to provide for his wife Jenny and their daughter. Jenny is played by Vicky Krieps, of newly minted “Phantom Thread” fame. She is a very vivid presence from her entrance on—the filmmakers could have cashed in by re-titling the U.S. release “The Hungry Karl Marx.” Marx meets the visiting Engels in Ruge’s drawing room, and after sniffing around each other—Karl instinctively distrusts the born-into-wealth Friedrich—express admiration for each other’s work. They head to the streets, run from French monarchist police who are busting heads of foreigners and agitators, and get wildly drunk, on both exchanged ideas and spirits. Then it’s The Hungover Karl Marx.

The movie chronicles their friendship, collaboration, and the tough time they had persuading more idealistic and less proactive workers’ representatives that a coherent doctrine was necessary for any meaningful movement to form and thrive. Marx in particular spars, politely, with French anarchist Pierre Joseph Proudon. Marx’s response to the elder statesman’s famed pronouncement “Property is theft” is an inquiry: “Whose property?”

The movie does not put ideas at the forefront, but it does present ideas with a solidity that’s admirable. Peck’s co-screenwriters Pascal Bonitzer, a longtime collaborator of the late Jacques Rivette, and the two clearly know their stuff. The movie is largely a story of personalities. Karl is fiery, brilliant, disorganized, passionate. Engels is, despite his courage and curiosity, a bit more of a wide-eyed innocent and certainly a more organized person. Their female partners do take secondary roles, but the movie depicts them as committed, innovative, and acute: true fellow travelers and comrades. The actors portraying these figures are all exciting to watch. August Diehl (who played a German major in “Inglourious Basterds”) is a fiery, sardonic, likable Marx. Stefan Konarske is a sincere, appealing Engels. Krieps’ Jenny has more than a touch of slyness while Hannah Steele’s Mary is appropriately fiery and proud. French great Olivier Gourmet is droll as Proudhon.

Marx and Engels’ thought was genuinely revolutionary, and it’s clear that Peck and Bonitzer would insist that said thought had little if anything to do with the depredations of the supposedly Marx-inspired Soviet Union. A post-diegetic text refers to Marx’s “Kapital,” noting that the work was unfinished, in part because Capital itself is ever evolving. An end credits sequence, a montage scored to a well-known '60s rock tune, attempts a precis of the evolution in very short form. It’s not unpersuasive. 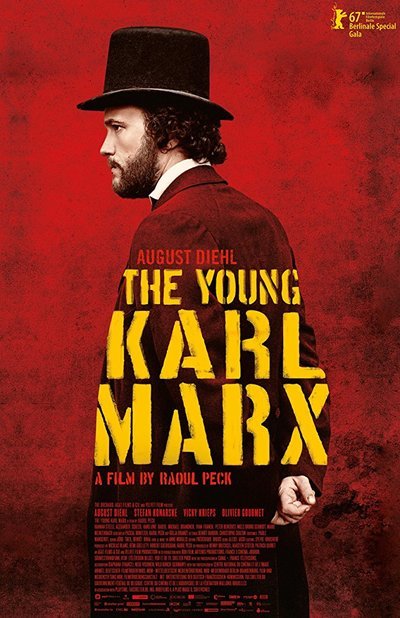