Despite being, in a sense, the most straightforward, linear narrative movie the writer and director Paul Thomas Anderson has made in quite some time (perhaps since “Punch Drunk Love”—and this is not the only respect in which the two films resemble each other), “Phantom Thread” could be the filmmaker's most fascinatingly oblique work.

The movie opens with a simple title card (accompanied on the soundtrack by high-pitched tones that could be string instruments, or electronic feedback), followed by a medium close-up of a young woman sitting in a chair, her face illuminated by fire light. “Reynolds has made my dreams come true,” she says calmly, addressing a figure not yet seen. The scenes that follow make this assertion rather hard to believe.

Welcome to the world, then, of Reynolds Woodcock, a couturier and a man of meticulous routine, as the following montage of his toilette attest. He applies shaving soap with brio, snips his nose and ear hairs with precision (played by Daniel Day-Lewis, he is a well-kempt man of a certain age), pulls up and cuffs his purple socks with vigor. At breakfast, a young woman offers him a luscious looking pastry and he looks at her as if she were a gigantic insect. A little later, Woodcock consults with his sister Cyril, a clipped and forceful woman, about how this household figure is to be disposed of.

And soon Woodcock is off, like a shot, to Robin Hood’s Bay, driving into the morning, dropping off his powerful car at a local garage, and ordering as he settles down to a table at the Victoria Hotel. We notice a young waitress at first because she is clumsy. Taking Woodcock’s order, she gains assurance; she vows to remember his order by heart, and it is enormous. She gets it just right, and he asks her, Alma, to dinner. At dinner he does most of the talking, describing his mother, and how she made him the dressmaker he is now, on account of his having made the dress for her second marriage. He talks of various superstitions concerning the making of wedding dresses; he tells Alma about the ways one can secrete small objects and messages into handmade clothing. When the conversation wanes, he looks at her. “If you want to have a staring contest with me, you will lose,” she says. And finally he invites her to his dressmaking studio in his country home. Where he does not seduce her, but asks her to stand for him so he can begin to create a dress for her. Cyril arrives just in time to write down Alma’s measurements— but not before sniffing Alma all over. Alma confides to Cyril her insecurities about her body. “You’re perfect,” crisp Cyril responds. “He likes a little belly.”

What is this relationship? A little later on, walking by the bay, Reynolds reflects on his great luck in finding Alma, and she responds, “Whatever you do, do it carefully.”

Reynolds is not particularly careful with Alma. She butters her toast too loudly. She oozes into his studio carrying a tea tray and he can’t take it at all; they volley back and forth with hard words and he finally says to her, “The tea is going out. The interruption is staying right here with me.” Alma concludes that after long periods of work, Reynolds needs to “settle down.” Her way of making him do this is, well, interesting.

But this is not a film that has a conventional climax; the war of wills between the two characters does not have a tidy resolution. We don’t even know just what it is that Alma wants, let alone what she gets. Her background is shrouded. Beautifully portrayed by Vicky Krieps, she speaks with a slight German accent. There’s a scene set at a press conference, where a vulgar dowager for whom Woodcock has made a wedding dress is discussing her impending wedding to a Dominican politician. A journalist asks the man about whether he “sold visas to Jews during the war” and Anderson cuts to a close-up of Alma, her face neutral. This is a movie of confrontations, of dreamlike moments dissolving into micro nightmares, but it is hardly a conventional “battle of the sexes” story.

The movie is, of course, beautifully made. Anderson’s visual style is remarkable. Shooting the picture himself, reportedly, with the collaboration of lighting cameraman Michael Bauman, he frames in a Kubrick-inflected style but cuts with a Hitchcock-influenced one. This gives the movie a sense of momentum that’s supported by Jonny Greenwood’s score and the other music (mostly classical) alternating with it. This is very much a “composed” movie; very little of it is without music, and there are very deliberate shifts in instrumentation and orchestration throughout. The acting is, of course, impeccable. Day-Lewis, performing for the first time in what seems like a long time in an accent and vocal timbre not unlike his natural one, is a tightly-wound wonder who becomes like an old-man kitten once Alma has reduced him to the “open and tender” state that she frequently desires of him. Krieps and Lesley Manville, both impeccable, inhabit the circumscribed world of this story with utter integrity.

There is a good deal around that world that Anderson withholds. The film is set some time after World War II, and it seems like centuries away from the so-called “Swinging Sixties.” But "Phantom Thread" goes to great lengths to never identify the exact time, despite containing a scene set at a New Year’s Eve party. There is never, in the scenario, a turning point that signals a permanent change in one of the character’s behaviors. Rather, the movie is a persistent depiction of the perverse stages of a perverse evolution. (Irresistible force and immovable object constantly moving to different places on a chess board.) In a sense, it feels anecdotal. The dialect in which the characters speak (peppered with frequent profanity; this R-rated film has no nudity, no sexual depiction, no physical violence and is rated R solely on account of its language, and possibly its themes) presents an arguably contemporary portrait of what would conventionally be called a bad alliance/marriage. But, as we’ve said, it’s set in an indeterminate time period, and Anderson’s determination to keep that period indeterminate creates a fluttering sensation relative to the familiar worlds and/or genres wherein we suspect the work itself could be said to be located. Numinous objects in the movie signify the pre-gothic (mushrooms, the dirt from which they are pulled) and the post-gothic (Woodcock’s car, a purple Bristol sedan, possibly a 1955 405, a speed demon of almost science-fictional dimensions). The movie also is rich with simultaneously playful and serious nods to what I presume to be Anderson cinematic touchstones, including “A Clockwork Orange,” “Psycho,” “The Knack (And How To Get It),” and, not as improbably as you might think, “Raising Arizona.”

As they gradually build, the intimations inherent in the movie’s latent content, which is ever roiling under its beautiful surfaces, become dizzying.

When Reynolds is sick with fever, he imagines his mother, standing stiffly in the wedding gown he made for her, against a wall next to a door in his bedroom. But he never looks directly at the figure. Instead, lying on his back, he stares straight up, and says “Are you here? Are you always here? I miss you. I think about you all the time.” This is the central node of the work, a pointing to a mystery that none of us will ever be able to solve, a sincere expression of hope within the loneliness we try to escape by, among other things, refusing to love each other. It takes us back to the movie’s title, and invests it with a power that is both exhilarating and frightening. 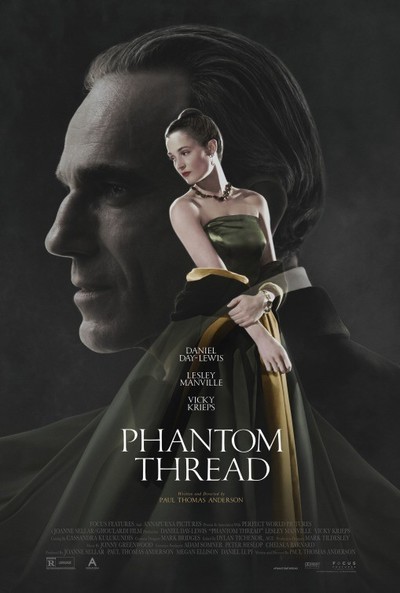