To be fair: there’s nothing inherently wrong with sad sack marina attendant Ben (John-Paul Howard) or his frustrated attempts at solving the mystery of his creepy amnesiac neighbors and their missing child. Ben’s mostly a drag because co-writer/director duo Brett and Drew Pierce (“Deadheads”) don’t seem to want to develop their gawky hero’s bummer summer—living and working in a dinky tourist town with his estranged dad Liam (Jamison Jones)—beyond precious coming-of-age quirks and uninspired effects-driven horror beats. So while “The Wretched” doesn’t quite live down to its title, the Pierce brothers’ latest also isn’t thoughtful, funny, or disgusting enough to be worth praising either.

Ben’s story is unevenly cut in two: the horror movie portion, which often feels like a watered-down/half-remembered Stephen King adaptation, and the movie’s unpolished and generally unpleasant “Meatballs”-esque teen sex-comedy scenes. Unfortunately, the strongest tie that binds these two parts of “The Wretched” together is a pervasive, non-too-subtle kind of adolescent horniness. Ben is obviously going through some changes, as we see in practically every scene featuring Mallory (Piper Curda), Ben’s flirty love interest, or Abbie (Zara Mahler), Ben’s haunted next-door neighbor. Mallory is a canny, sassy local girl. She’s presented as a welcome alternative to the cartoonishly cliquish popular teenagers that hang out at Liam’s marina in their rich dads’ speedboats. Mallory is also tellingly introduced to viewers in a gross early scene where she over-stresses her favorite Starburst candy flavors: “It’s all about the strawberry and the cherry.” Yikes.

Abbie’s somehow even worse since she, like Mallory, often feels like a collection of cliches of hyper-sexualized femininity: she has tattoos, drinks beer(!), and knows how to gut and clean a deer. Somehow, Abbie still gets possessed by malevolent woodland spirit “The Wretch” (Madelyn Stuenkel). Once that happens, Abbie wanders around in form-fitting clothing (dig that low-cut dress!) and tries to lure both Ben and other young children into her cellar basement. Abbie also has noisy sex with her husband Ty (Kevin Bigley) by a well-lit window, in plain view of Ben and his “Rear Window”-esque binoculars. So I guess she’s really asking for it ... ?

Mallory and Abbie might have been engaging foils for Ben’s adolescent fears if they were even negligibly developed beyond pandering genre movie cliches. Then again, that total lack of psychological depth and/or emotional complexity seems to be the point of a hormonal genre exercise like “The Wretched.” Which is mainly frustrating because the Pierces write, in the movie’s press notes, that they were inspired by Roald Dahl’s “The Witches” as well as “the experience of living with our own parents’ divorce.” There’s nothing so personal in “The Wretched,” except for maybe a very basic love/hate attraction to the very idea of strong, independent women.

Misogyny is a worthy subject for a horror movie, but it’s almost never considered as such in “The Wretched.” The Pierces aren’t just a little too enamored with Ben’s teenage lizard brain view of the world: they’re also a little too eager to entrench/mythologize that mentality by neutering it in the same way that their favorite ‘80s standards previously did. So blood and other bodily fluids—like when Ben pukes on Mallory, and then (unsuccessfully) tries to make it with another girl—are as explicit as the film’s sexual tension gets, beyond an abundance of icky sexual innuendo. None of these genre tropes are presented thoughtfully, so they often feel like items on a long checklist of the Pierce brothers' favorite things. There’s even a body horror-style monster transformation sequence that mercilessly swipes, I mean pays homage to an iconic moment from David Cronenberg’s “The Fly.”

Ultimately, “The Wretched” doesn’t work as either comfort food or gross-out entertainment because Ben’s world is rarely shown to be bigger than his libido. Like when he watches Ty and Abbie have sex while he talks with Mallory over the phone. Mallory unsuccessfully tries to bait Ben into talking about the above-mentioned puke episode, but he shrugs her off: “This movie just got good,” he says peevishly while adjusting his binoculars. I can’t say that I agree. 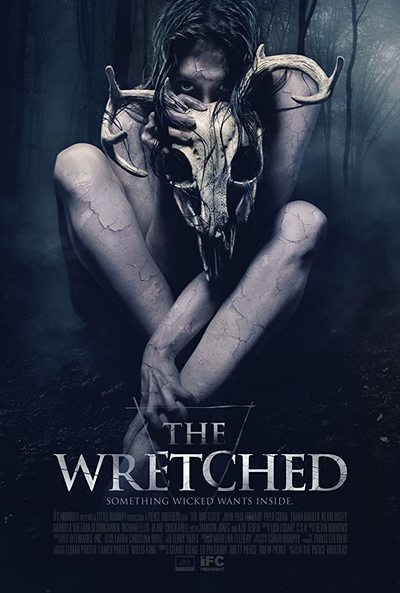