“In heaven, everything is fine.”—Lady in the Radiator (Laurel Near) in “Eraserhead”

How does one go about describing the stomach-churning terrors of Joaquín Cociña and Cristóbal León’s “The Wolf House”? Its visual landscape is unlike any I’ve experienced, and though everything about it is aggressively repellant, it still managed to hold me in a constant state of gobsmacked awe. It wasn’t until I saw the 1959 Disney classic “Sleeping Beauty” in 70mm at Chicago’s Music Box Theatre that I realized how the brushstrokes of its animation had been erased on Blu-ray, as if in an attempt to hide the fact that it had been created by human beings without the aid of computers. I’ve always found that such spectacular imagery is all the more impressive in its hand-crafted nature, and it is the deliberate artifice of Cociña and León’s stop-motion marvel that makes it so spellbinding. Characters decompose and reform without warning as the design of the surrounding space continues to shift, heightening our disorientation at every turn. Painted figures suddenly turn three-dimensional and inanimate objects prove to have as much life as the laughing furniture in “Evil Dead II.”

A clue to make sense of this nightmarish fever dream is fed to us right at the beginning, as we view what appears to be propaganda footage of a southern Chilean cult known as the Colony, where its German inhabitants lived close to nature in alleged harmony. In order to dispel the nasty rumors that have spread regarding the community—none of which are specified—the Colony has delved into its vaults to present us with the following indoctrination video designed to venerate the purity of their lifestyle. Indeed, one can imagine cult members toiling away on this meticulous spectacle as ordered by their tyrannical leader, whose seductive voice takes the form of a wolf (Rainer Krause), while the pervasive sickness of their ideology inadvertently creeps into every frame. It doesn’t take much research to figure out that the predatory wolf was inspired by Paul Schäfer, a German fugitive accused of child molestation, who fled to Chile where he founded Colonia Dignidad (“Dignity Colony”) in 1961. Former Nazis such as concentration camp doctor Joseph Mengele were among the colony members, whom Schäfer instructed to torture and murder dissidents during Pinochet’s military dictatorship, while enabling child sexual abuse to run rampant.

These crimes remain offscreen in “The Wolf House,” and are hinted at solely through the fantastical symbolism of the faerie tale spun for us by the wolf, as if coaxing Little Red Riding Hood to take up residence in his stomach. Our tale officially begins with Maria (Amalia Kassai), a young member of the Colony, breaking free from her captivity after being punished for letting three pigs escape. She flees through the woods and finds a house where the entirety of the stop-motion takes place. The lack of conventional edits makes us feel all the more entrapped, as new sequences begin only when we enter a new room or the frame of a portrait. When Maria first enters the house, we seem to be viewing the space from her perspective—that is, until she materializes in painted form on the wall before coming to life as a puppet comprised of paper, cardboard and masking tape.

Cociña and León brilliantly portray the ever-evolving nature of dreams, continuously switching up the look of their world and the perspective from which we view it, thereby magnifying the falsity of the truth it preaches. Maria’s memory of the guilt she felt when luring animals into a hole in the ground, a task that results in her being rewarded by a satisfied tree, could very well represent the graves of Pinochet’s dissidents. The flowers that subsequently bloom from the soil later spring from the house’s walls—and even a stigmata—when Maria nurses her two adopted children to health, thanks to the healing power of the Colony’s magical honey (which also supposedly triggers the growth of blonde hair). Barely anything of plot-related consequence needs to be occurring onscreen in order for our fascination to be sustained by the sheer unpredictability of the visuals. At any second, Maria could devolve into the upholstery of her chair or be rendered a colorless shell as the painted texture of her soul drifts from her body onto a nearby surface.

Maria’s “children,” Pedro and Anna, start out as pigs that she finds in the house and gradually turns into humans, causing them to temporarily resemble hybrid beings not all that far removed from the baby in “Eraserhead.” It becomes quickly apparent that Maria intends on forming a miniature cult of her own, forbidding the children to go outside while reading them bedtime stories about a naughty dog that disobeyed orders by leaving the loving confines of its home, never to return. As the wolf notes in Christ-like fashion, he remains inside his followers at all times, even those who have strayed. Some of the eeriest moments occur when his eyes appear on the wall, peering into Maria’s shoddily arranged sanctuary while purring her name. She echoes the name of her Colony by arguing that she gave her children “dignity,” a term Schäfer repeatedly cited in defense of his monstrous acts.

Could “The Wolf House” have been condensed into an Oscar-worthy short subject? Without question. Though it marks the debut feature of Cociña and León, it barely clocks in at feature-length, and as soon as its themes have been established, they grow repetitive. However, these quibbles hardly matter when faced with the staggeringly twisted grandeur of the animation, which was filmed over five years and moves at such a hypnotic pace that it causes time to dissolve, prompting us to lose ourselves within the madness of our captor’s vision of heaven, where everything is assuredly less than fine. Such a ruthlessly claustrophobic horror show will surely be the worst possible programming for many viewers currently in quarantine, yet there is a certain breed of genre-loving cinephile that will not only embrace this picture wholeheartedly, but view it multiple times, preferably under the influence of cannabis. You know who you are, and I have no doubt the wolf does too. 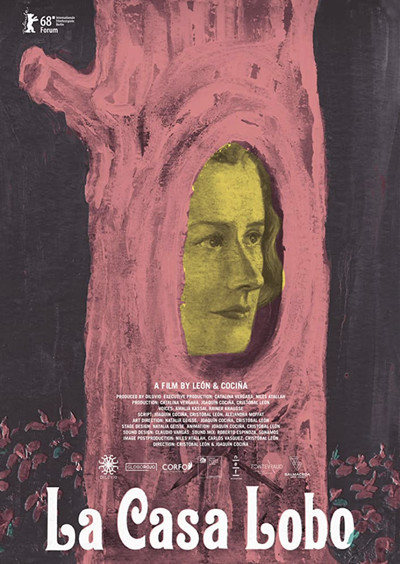