After the success of films like “The Firm” and “A Time to Kill” in the mid-‘90s, filmgoers were treated to dozens of Grisham wannabes, films that mimicked the hit author’s legal prose, typically with a twist or two in the final act. Courtney Hunt’s sterile and flat “The Whole Truth” would have fit perfectly in this lackluster subgenre. Starring Keanu Reeves, Renee Zellweger, Gugu Mbatha-Raw and Jim Belushi, almost the entirety of this courtroom drama takes place literally in a courtroom, and the whole thing has the energy of a basic cable TV show. Actually, that’s not fair—most of those have more to say and more of a visual language. Ultimately, there’s nothing offensively bad here—other than a waste of talent who should be doing better work—but it’s so forgettable that you’ll have trouble remembering if you saw it or not when you scroll past it on cable in a few months.

“The Whole Truth” opens in the courtroom in which most of the film will take place. We meet an attorney named Ramsey (Reeves), defending an old family friend named Mike (Gabriel Basso), who has been accused of murdering his father Boone (Belushi). When the police arrived on the scene, Mike was crouching over his father’s body, there’s a palm print on the knife that looks like his, and he arguably made a confession. He’s been silent ever since. Zellweger plays Mike’s mother; Mbatha-Raw gets a totally thankless role as Ramsey’s co-counsel.

Over the course of the trial, we learn about the dark side of Boone, a man who could be abusive with both his wife and son. Did Mike finally have enough of his abuse? Did he kill his father to protect his mother? Ramsey has no idea because Mike hasn’t said a word about what happened that day. It’s hinted at early on that Mike had an obsession with crime-solving, planting the seed that perhaps there’s more going on than we may expect. And then the film employs a flashback structure that kind of becomes its trick. Ramsey tells us in overwritten narration—and to his co-counsel—that every witness lies. So we see witness testimony that either omits something or flat-out lies, and then we see the truth through flashback. Of course, it all culminates in several final act twists, the last of which makes almost no sense at all.

“The Whole Truth” is filled with lines out of the Grisham playbook (like “They don’t teach this in law school”) and your enjoyment may come down to how much you’re willing to forgive for the sake of a legal mystery. There’s a whole genre of mass-market paperbacks—I used to call them “airport books”—that work perfectly on a beach or a long flight, when one’s bullshit detector somehow becomes dulled. The script for “The Whole Truth” is an “airport book,” although it contains even less sizzle and grit than most of those. It's by-the-numbers.

What’s most surprising about “The Whole Truth” is that it was helmed by Courtney Hunt, who directed Melissa Leo to an Oscar nomination for “Frozen River” in her debut. Since then, she’s been working in television, including HBO’s “In Treatment” and, perhaps noteworthy here, NBC’s “Law & Order: SVU.” If you put “Frozen River,” with its deep character work and excellent use of setting, next to “The Whole Truth,” I don’t think many people would think they were directed by the same filmmaker. One can only assume that this was a for-hire gig. Maybe it was part of her “SVU” contractual obligation. How she got involved in such a lackluster production is what I'd really like to know the truth behind. 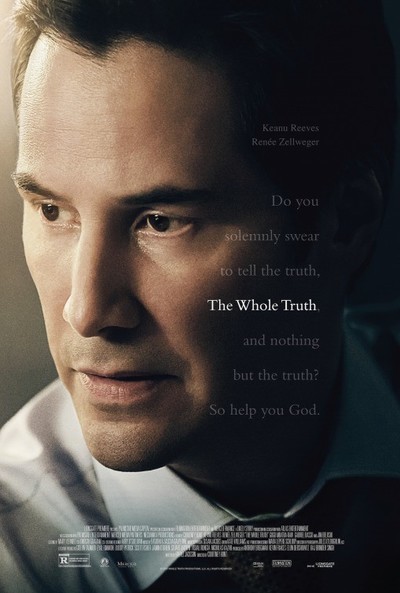 Rated R for language and some violence including a sexual assault