The Hong Kong Triad mob thriller “The White Storm 2: Drug Lords” is a cynic’s delight, though often not in the ways you might expect. As a message movie, “The White Storm 2” is pretty toothless. Viewers are asked to decide for themselves which scuzzy public figure is worse: untouchable drug kingpin Chun-kwok Fung (Louis Koo) or reformed mobster Shun-tin Yu (Andy Lau), now a celebrity philanthropist who could, but chooses not to narc on Fung. Spoiler alert: the drug dealer comes out of this popularity contest looking the worse for wear.

Then again, waiting for Yu to be brought to justice is weirdly cathartic. Writer/director Herman Yau captures a rarely considered political reality: the long, agonizing wait before a conspicuous, politically enabled villain screws up badly enough to be shut down for good. So while “The White Storm 2” may not be as sensational or as nuanced as it could have been, it is a satisfying dramatization of reluctant maneuvering.

“The White Storm 2” is as sturdy as it is because it’s essentially an old-fashioned gangster drama with occasional modern flourishes. Much of the movie’s drama happens between action scenes: you get some domestic strife (Yu’s loving wife wants a child, but is infertile!), a few macho glaring contests, and a bunch of frustrated grumbling from Nam Yu (Michael Miu), a square-jawed cop who wants to avenge the death of Danny Tan, a teenage drug addict. Miu’s character is often useless to the point of being unintentionally fascinating: what role does this movie and its politically corrupt world have for a morally upstanding, but effectively powerless hero?

Not much, apparently, though Nam does inevitably team-up with Yu, a character who spends most of “The White Storm 2” smiling uncomfortably while Fung makes deals in his refrigerated meat locker (he’s a pig butcher by day); or holds a press conferences just so he can cry crocodile tears while professing his innocence; or causes a scene at a powerful mob boss’s funeral. Fung is the Joker to Yu’s Harvey Dent, so it makes sense that Miu’s character is an afterthought; nobody really wants to hang out with Batman when they could be palling around with two attractive villains instead.

And boy, if you’ve ever wondered what Koo and Lau’s appeal is, you gotta see “The White Storm 2.” Koo delivers the more immediately compelling lead performance since he’s got more scenery to gnaw on, like when Yu has quiet (but vigorous) standing, doggy-style sex while he sternly tells off another flunky in an adjacent room. “It's a zoo out there,” Koo says as he humps his partner with a comically straight face before adding: “Do it with a bang,” just to add extra emphasis to an otherwise forgettable command. I had fun rooting against such an enthusiastically petty villain: Yu even asks for a receipt after he donates HK$1.10 to an anti-drug charity.

I was also rather taken with Lau’s understated performance. By now, Lau has perfected the art of saying a lot with a furrowed brow, a tight-lipped smile, and some fashion-model-worthy poise. He’s one of a handful of contemporary leading men who can handily convey the quality of their character just by having very good posture.

For a while, Yu and Fung’s clashing personalities and performances—Lau as subdued yang to Koo’s hammy yin—are compelling enough to keep “The White Storm 2” interesting, especially during the movie’s sleepier stretches. Which is great, because there isn’t a lot of action in this movie. There are, admittedly, a couple of well-choreographed (but distractingly busy) shoot-outs, but it takes a while before the filmmakers deliver a truly memorable set piece (three words: subterranean car chase).

For the most part, “The White Storm 2” is a talky movie about conflicted, soft-spoken men who prefer to send each other veiled threats than, y’know, actually stopping each other. The movie’s general lack of explicit violence or high-boil tension is (probably) at least partly because of the uneasy position that writer/director Herman Yau finds himself in: Yau is one of the few mainstream HK filmmakers who’s still making movies about political corruption (many of his contemporaries have absconded to mainland China to make glitzy period fantasies and/or bubbly Lunar New Year comedies). That can’t be an easy line to walk.

Still, while “The White Storm 2” is more tame than the sensational true-crime thrillers that Yau made his name with during the 1990s—like the productively slimy “The Untold Story” and the consummately unclean “Ebola Syndrome”—his latest drama isn’t exactly toothless, as we see during a wild car chase whose casualties include a double-decker bus with a prominent rooftop ad for the “Fair Trade Exhibition.” If anything, Yau has delivered something for everyone: a scuzzy tribute to a charming monster, a soapy elegy for a conflicted, but well-meaning philanthropist, and an “Infernal Affairs”-style anti-corruption saga for anybody who enjoys watching handsome men in well-tailored suits glower at each other for awhile. “The White Storm 2” is not going to blow anybody’s socks off, but it might keep viewers entertained while we wait and hope for might to make right. 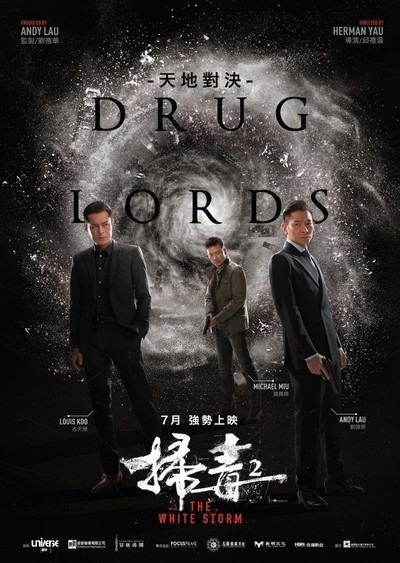