Rudolf Nureyev was a game-changer—a dancer who wanted to leap as grandly and pirouette as powerfully as the ballerinas with whom he shared the stage. He wanted to do more than just stand there and support them as they soared, as had been the traditional male role. He wanted to soar just as high, if not higher.

“The White Crow,” Ralph Fiennes’ drama about the Russian dance legend’s defection from the Soviet Union in 1961, captures Nureyev’s bravado and brash spirit, but it never reaches his resplendent heights. The young man playing Rudi, Ukrainian dancer Oleg Ivenko, had never acted before starring in “The White Crow,” yet his physicality and energy are wholly convincing. But then David Hare’s script detracts from the potential power of the performance. It’s structurally awkward, jumping around in time needlessly and sometimes confusingly, rendering Nureyev’s story weirdly inert until the final 20-30 minutes.

This is Fiennes’ third film as director following “Coriolanus” (2011) and “The Invisible Woman” (2013), both handsome but restrained efforts. He also has a supporting role as Nureyev’s teacher and mentor (in which he displays a so-so Russian accent). Fiennes favors an old-fashioned approach to many individual sequences, which can be pleasing. He bathes Paris in a creamy, sun-drenched light that radiates romance and nostalgia, and the propulsive score from Ilan Eshkeri provides a sense that anything is possible. Similarly, he shoots the dance sequences (of which there are too few) in such lush blues, greens and pinks. It feels as if we’re watching a retro, Technicolor musical.

Because there are enough individually compelling elements at work here, it makes the film as a whole feel like that much more of a missed opportunity.

“The White Crow” flits about between 1961 Paris, where the Kirov Ballet, including Nureyev, is visiting on a mission of spreading Soviet cultural superiority, and the dancer’s impoverished childhood in the bleak, chilly town of Ufa in central Russia. Fiennes desaturates these segments so significantly, they almost look like they’re in black and white, and the aesthetic choice provides a stark contrast to the inviting scenes in Paris. But then in the middle of all that, we also dip into moments with the surly, 17-year-old Nureyev as he begins his ballet training in Leningrad with Fiennes’ Alexander Pushkin, a quietly graceful man whose approval he seeks but whose ballet school’s rules he refuses to obey.

We are to believe that Nureyev’s decision to stay in Paris once it’s time to return to Russia isn’t so much a Cold War-fueled political decision as it is a personal one. We’ve seen him drink in the culture—the art, music and nightlife—always with ballet company minders and KGB eyes following him. He isn’t the Nureyev of legend yet, but he’s a star on the rise, and the possibility of him thinking for himself is too great a threat for them to tolerate. Again, though, a steadily building, linear narrative would have given their surveillance a more suffocating sense of dread.

Rudi’s guide for many of his explorations is socialite Clara Saint, whom he meets through the French dancers who’ve befriended him. But Adele Exarchopolous, star of “Blue Is the Warmest Color,” doesn’t get much to play with in this character beyond stoic sadness. She finally gets the opportunity to step up toward the end when he needs an ally the most, but by then it’s a bit of a wonder what holds their friendship together; he’s a diva, she’s a drag, and their connection isn’t romantic. “The White Crow” also wastes the prodigious talents of the great Sergei Polunin—who’s been compared to Nureyev—in a minuscule supporting role as Nureyev’s fellow company member and roommate on the road. Why cast a ballet superstar and then barely have him dance?

Along those lines, because everyone is speaking much of the time in English, which is none of the characters’ first language, there’s an inherently stilted nature to the way they communicate, which creates an emotional distance not only between each other but also between them and us.

But once Rudi impulsively decides to stay at Le Bourget airport—a panicky move he makes once he realizes he’s being taken to Moscow while the rest of the company heads to London—“The White Crow” finally kicks into gear. Fiennes’ camerawork is fidgety, roving, full of sweaty close-ups. There’s a focus and an intensity to this final segment that's missing for much of the preceding film, and they are welcome at last during the thrilling climax. 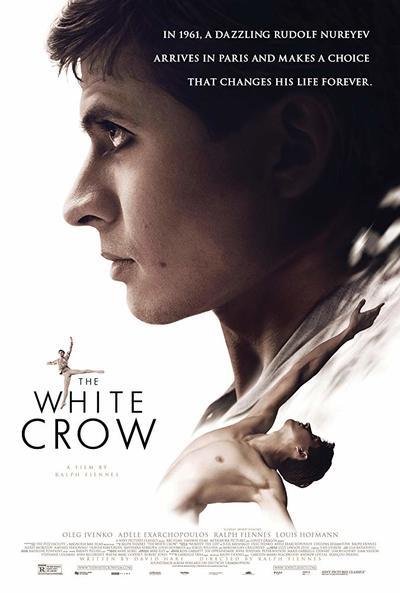 Rated R for some sexuality, graphic nudity, and language..