A January comedy starring Kevin Hart would not necessarily be cause for optimism. (See: “Ride Along.” On second thought: don’t.) Which is why it’s such a surprise that “The Wedding Ringer” is vaguely more tolerable than you might expect – enjoyable, even, in sporadic bursts.

Let’s put it this way: If you’re at the multiplex in the middle of the afternoon, and “The Wedding Ringer” is the only movie playing at a time that’s convenient, you won’t be completely miserable. This is not exactly a ringing endorsement, I realize. But you take life’s tiny pleasures where you can find them.

That was not a dig on the diminutive Hart, I swear! A little of his patented, rat-a-tat comic shtick tends to go a long way; here, his pairing with the sweet, shlubby Josh Gad tempers him somewhat. The two actors have a nice chemistry with each other which helps enliven the film’s formula: a familiar mix of bromance and raunch. And while you know where this story is headed from the very start, director Jeremy Garelick and his co-writer, Jay Lavender, throw in a few welcome detours.

Gad stars as Doug Harris, a successful Los Angeles tax attorney who’s about to marry a woman he thinks is completely out of his league: the pretty, blonde Gretchen (Kaley Cuoco-Sweeting). While Gretchen is obsessing over salad dressing flavors (and is generally depicted in stereotypically controlling, materialistic fashion), Doug is trying to hide from her and their flamboyant wedding planner, Edmundo (Ignacio Serricchio), that he doesn’t have any groomsmen to go along with her seven bridesmaids. He doesn’t even have a best man. Because he has no real friends.

It’s not that Doug is a bad guy. Quite the contrary – he’s obviously kindhearted, caring and decent to the core. But he’s also a little awkward when it comes to making pals. So on a tip from Edmundo, he pays a visit Hart’s Jimmy Callahan, a best man for hire. Jimmy can plan your bachelor party and deliver a killer toast. He can round up as many groomsmen as you need. He can do every type of ceremony imaginable. But he’s quite clear about the fact that he’ll be out the door once the cake is cut because he’s not your real friend.

Stop me if you think you’ve heard this one before. This is essentially the same premise as the 2009 comedy “I Love You, Man,” in which Paul Rudd plays a man who’s engaged but doesn’t have many male friends, so he goes on a series of “dates” to find a best man and ends up with the charming but overpowering Jason Segel. But – as you might imagine – there was a delicacy there and an honesty in that movie which are mostly lacking in “The Wedding Ringer.” The latter film hints at a male relationship that’s more meaningful, but more often would rather go for a crass gag involving a Basset hound and some peanut butter.

Jimmy gathers a motley collection of freaks and misfits to serve as the longtime friends on Doug’s side of the wedding party. (Gretchen never notices that the placeholder names he gives her include Drysdale, Carew, Rambis, Plunkett and Dickerson. Because women don’t like sports, silly!) These characters are actually fleshed out more than you’d expect and the back stories they receive as they pretend to be Doug's buddies are crammed with amusingly bizarre details. And their commitment to the ruse, in the name of this stranger’s happiness, is oddly sweet.

Other characters – mainly, the female ones – are barely there, including a woefully underused Olivia Thirlby as Gretchen’s sister and Cloris Leachman as their grandmother, whose sole purpose is to be set on fire over lunch in a madcap (and unfunny) slapstick set piece.

But the central interplay between Jimmy and Doug has a loopy kind of buoyancy to it, particularly during a scene in which the two crash someone else’s wedding as practice. Gad, the Tony-nominated star of “The Book of Mormon” who’s probably best known as the voice of Olaf in “Frozen,” gets to put his showmanship on display in a truly inspired dance sequence with Hart. It’s the highlight of the entire movie.

Naturally, though, as things are going so well between the two, there will be a couple of sources of conflict you can expect: What happens when these men become too close in violation of their business contract? And what happens when Gretchen finds out that these were all bros for hire? The conclusion is a sloppy combination of feel-good and tasteless, but at least it’s consistent. 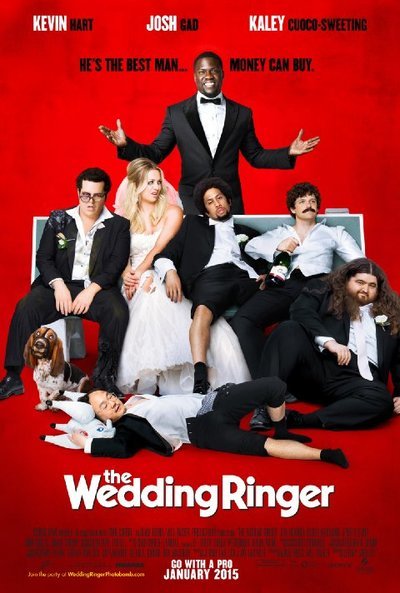 Rated R crude and sexual content, language throughout, some drug use and brief graphic nudity