How can you resist this plot? A 30-something, Ultra-Orthodox Jewish woman is jilted by her fiancé just 22 days before they take their vows. But instead of canceling the reception venue booked for the eighth day of Hanukkah, she trusts that fate in the form of the Almighty will provide a willing replacement and that the ceremony, like Celine Dion’s heart, will go on.

It is quite tempting to seat American-Israeli filmmaker Rama Burshtein’s sophomore effort, “The Wedding Plan,” at the same table as “My Big Fat Greek Wedding.” And that’s not just because Noa Kooler as the formidable bride-to-be often summons the same off-the-charts, anti-ingenue relatability factor, along with a Kudzu-like abundance of curly hair, that served Nia Vardalos so well in the unexpected comedy hit from 2002.

That breakout indie smash adhered to Hollywood’s screwball conventions as filtered through the kooky world view of a close-knit ethnic clan. But “The Wedding Plan” feels less like “My Big Fat Jewish Nuptials” and more of a faith-based variation on a Disney princess fantasy. Instead of a fairy godmother, God himself will find her Mr. Right.

Burshtein previously tackled her religion’s custom of arranged marriages to dramatic effect in her much-praised first feature, “Fill the Void,” as a reluctant 18-year-old is pressured to get hitched to an older widower with an infant son. But while a dry sense of humor (often propelled by unseen twists) courses through “The Wedding Plan,” our heroine’s unwavering belief in the face of potential disaster adds poignant weight and lifts the stakes of the outcome considerably. There is also a melancholic essence to how Kooler’s Michal, the 32-year-old owner of a mobile petting zoo who leads a satisfying single-lady life with a supportive circle of family and friends, has reached a point where she craves the sort of intimate companionship and social respectability a husband would provide.

There is a magical “Bibbidi-Bobbidi-Boo”-ness inherent in her situation that is felt from the very first scene as Michal nervously sits in the waiting room of Hulda (Odelia Moreh-Matalon), a kind of Hasidic voodoo doctor for the lovelorn. She first invites her to punch spongy biscuit dough with her fists to release her anger and then spreads fish guts on her face to shoo away whatever evil forces might be keeping her from locating her mate. Apparently, the treatment has worked since we next see Michal with her intended, Gidi (Erez Drigues), as they prepare to sample food for their reception, provided by Hulda’s catering-hall owner son, Shimi (Amos Tamam). Suddenly, a distant Gidi confesses he doesn’t love her and departs.

We then watch as Michal, refusing to be defeated, submits to a series of restaurant dates set up by a matchmaker. She might be anxious about her situation. But despite her matronly wardrobe heavy on garish prints, ankle-skimming dirndl skirts and high-necked pussy-bowed blouses that look as if they were ordered from a retro ‘80s catalog, she is no pushover. In fact, she is just the opposite. Instead of trying to submissively please the men placed before her, she challenges them with probing questions and often answers her inquiries so honestly that they are taken aback. One wannabe groom declares she has “a nutty energy” and she definitely does. When Michal encounters a deaf candidate who communicates through a sign-language interpreter, he asks her why she agreed to meet after originally turning him down. Her answer: “Despair.” His dismissive hand signals at that point don’t require a translator to be understood.

After experiencing several such dead-end auditions, Michal goes on a pilgrimage to the Ukraine to visit the shrine of Rabbi Nahman, the founder of a Hasidic sect. She ends up pouring her heart out at his tomb, weeping uncontrollably and declaring herself a liar. Suddenly a male voice behind a wall that separates men and women visitors tries to console her. When they meet outside, he turns out to be a dreamy pop star with a come-hither smile named Yos (Oz Zehavi, a real-life Israeli pop star) who is so taken by Michal’s frankness, he offers to marry her after hearing her story. She might be flattered, but she knows better as they eventually part ways. Burshstein is perhaps at her best as a writer during this unlikely encounter that blends spirituality and desire.

A kind of feminist showdown materializes when Michal brings her zoo creatures to a girls-only birthday party and decides to haul out a long yet harmless snake. She asks for volunteers to touch the slithery reptile and one young bespectacled lass is eager to do so, but the mother in charge of the gathering disapproves. A potential catfight also rears its head when Michal learns secondhand that her roommate has betrayed her by hooking up with Gidi.

But while misogyny plays a part in her quest—Michal is concerned about being humiliated by her single status if she waits too much longer—it is clearly her choice to engage in this weird variation of the board game Mystery Date. Still, her more secular relatives and friends, including her roommate, will support her even if they worry she will be left inconsolable by the outcome. Burshtein allows some loose and unexplained story threads to dangle needlessly along the way, but she does know how to ratchet up the tension and keep us guessing to the very end. No hints here. But the conclusion is almost as satisfying as when just the right bridesmaid ends up catching the bouquet. 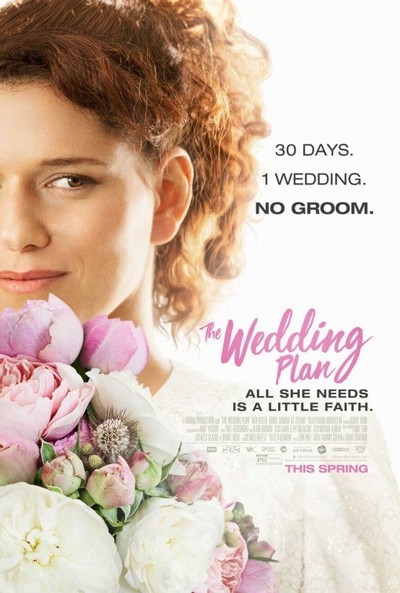