In the opening shots of Michael Winterbottom’s “The Wedding Guest,” Jay (Dev Patel) looks solemn, determinedly moving towards something. He looks to be on a mission. There’s a touch of mystery in his movement as he makes his way from the Lahore airport in Pakistan, towards dipping in-and-out of shops looking for duct tape, suitcases and a gun. He tells people he’s going to an old friend’s wedding, but it couldn’t be further from the truth. Jay is on his way to kidnap a bride, Samira (Radhika Apte), and whisk her across the border for his employer and her secret boyfriend, Deepesh (Jim Sarbh).

However simple the plan, “The Wedding Guest” is a movie steeped in the traditions of film noir, and its narrative will become complicated very quickly. Winterbottom, who also wrote and co-produced the movie, creates a story about gorgeous people committing crimes and double-crossing each other, where no one is innocent, except maybe the poor guard who’s killed during Samira’s kidnapping. In one scene while on the lam in India, Samira mentions that she and Jay are on the run like Bonnie and Clyde, two wayward souls finding each other by crime and chance. There’s more than a hint of romance between the two.

However, “The Wedding Guest” is perhaps much closer in spirit to “Double Indemnity,” Billy Wilder’s twisted 1944 film noir about a conniving woman (Barbara Stanwyck) who entraps a poor dope (Fred MacMurray) in a scheme to kill her husband. Samira’s double nature is not apparent at first, and Apte so convincingly plays the victim, the character shift is almost too subtle. She’s trying to escape her family and an unwanted marriage, and Jay becomes her last ticket out from that situation. Later, she becomes more confident in winning over Jay’s trust, and she appears remorseless, actively flirting with the man hired to kidnap her. It’s a sleight of hand trick she plays very well.

Set in Pakistan and India, the movie adds an element of travel lust to the mix without addressing any of the thorny political issues currently roiling the neighboring countries. That isolation works because the fugitives are so isolated, they spend as much time as possible away from everyone else. Plus, Jay noticeably does not speak any of the local languages of the places they travel through within the two countries, relying instead that someone, somewhere will understand English. The various languages in the movie will sometimes go entirely untranslated, so the English speakers in the audience will only know what Jay knows.

And what Jay knows seems to be very little as the story twists and turns. As he grows from kidnapper to protector, it’s apparent that perhaps Samira is indeed modeled after Stanwyck’s “Double Indemnity” character, pulling strings of a puppet who doesn’t know he’s being played. Here, Patel gets the chance to play with the archetype of the doomed film noir antihero, a tough yet still vulnerable, serious man, a role that could have suited Robert Mitchum in another era. His character remains ambiguous with a James Bond-like confidence even when he makes a mistake.

Cinematographer Giles Nuttgens channels that film noir spirit not in hyper-stylized Dutch angles or sharp contrasts, but in gentler, shadowy ways. Apart from one scene in a rocky, treeless desert, much of the movie looks like the criminals are running from the light, spending much of their time moving from hotel-to-hotel or traveling as the sun streams in from a train window. It’s as if there’s a soft, cloudy sky looming over their trip, not dark enough to rain but not sunny enough to be happy.

While Patel’s performance and the chemistry between him and co-star Apte are thrilling to watch, the travel scenes sometimes slow the film’s momentum down. There doesn’t seem to be a concrete reason for hopping town-to-town, other than India has many pretty places for them to hide out. There’s also a sharp tinny sound in Harry Escott’s music somewhere that sometimes took me out of the movie. After trying it on two different speakers and hearing the same sound, I can only conclude it was meant to create a suspenseful ambiance, but that it didn’t work for me.

“The Wedding Guest” may not be everyone’s idea of a thrilling neo-noir, but I liked much more of it than I thought I would. Winterbottom’s camera focuses more on the chemistry between his two leads than it does their surroundings, which seems to pass by like a blur in their whirlwind escape. It helps that Patel throws himself into the part of a brooding, mysterious romantic leading man. Patel, who also served as a producer on the film, may be looking into graduating from playing stock supporting characters and into more challenging lead roles. “The Wedding Guest” makes a very compelling case for a promotion. 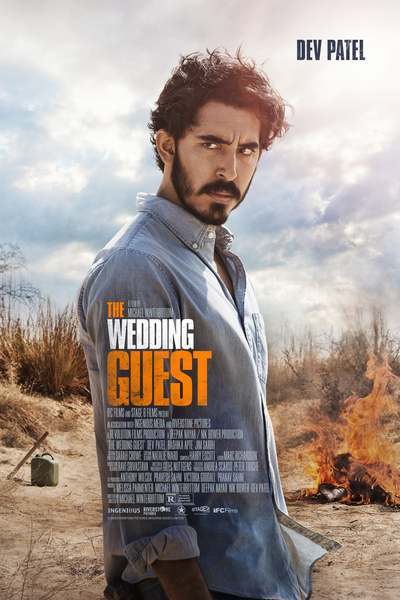 Rated R for language, some violence and brief nudity.