The War and Peace of Tim O'Brien

Aaron Matthews’ “The War and Peace of Tim O’Brien,” a documentary about the author of acclaimed books about the Vietnam War, has a title that’s evocative and appealing, but not terribly accurate. “The Late-Life Fatherhood, Gnarly Writer’s Block and Tragic Nicotine Addiction of Tim O’Brien” would be more cumbersome, admittedly, yet it would capture more of what’s actually on screen in Matthews’ well-intentioned but only partly satisfying film.

O’Brien was drafted into the Vietnam War in 1969 and later attended graduate school at Harvard and worked at the Washington Post. Vietnam has dominated the eleven books he has published since 1973, including the two novels that have received the most effusive praise: Going After Cacciato (1978) and The Things They Carried (1990), which the Library of Congress named one of the 65 most influential books in U.S. history.

Given those facts, Matthews’ film might have given us a real War and Peace, chronicling how reluctant warrior O’Brien went to Vietnam, witnessed and was transformed by the war, then found a vocation and built a career as a writer during peacetime. But this is not that type of film. Documentaries about writers usually take an approach either of biography, telling the life story and correlating that with the work, or portraiture, showing us the personality who created the work (which we are usually assumed to know). Matthews’ film is the latter variety; it escorts us into the current stage of O’Brien’s life, only rarely referring back to the trials of Vietnam or the achievements of literary fame.

Though we learn almost nothing about his experiences leading up to the turn of the millennium, O’Brien’s life seems to have undergone certain significant changes around that time. For one, he began a teaching career at Texas State University-San Marcos. More crucially, he became a father in his late 50s, siring two sons, Timmy and Tad, with his partner Meredith, who refused to continue their relationship if he wouldn’t commit to fatherhood.

Around the same time, it seems O’Brien began to experience a serious writer’s block. In interviews, he has suggested a connection between that event and the onset of fatherhood, as if the newer commitment somehow undercut the earlier one. But is that an accurate description of what happened, or an evasion, an excuse?

Matthews’ film doesn’t probe such questions because it eschews interviews, including any with O’Brien. It adopts the fashionable approach of observing its subject verite-style, giving us glimpses into his life during the latter part of the last decade. We see lots of Tim and his family at their suburban home in Austin, Texas, where attention is given to their domestic routines and his rituals in attempting to write, as well as the sports endeavors of teenaged Timmy and Tad; we also follow Tim on his excursions out into the world, usually for speaking engagements. Then there’s his time in the hospital with pneumonia (he’s had four recent cases), which somehow doesn’t convince him to give up his two-pack-a-day cigarette habit.

On screen, O’Brien, now 74, comes across as thoughtful, intelligent, principled, occasionally crotchety and lacking a certain degree self-awareness. Did he allow Matthews to film him hoping to see something about himself on film that eluded him in life?

Vietnam only occasionally intrudes here. The most significant instance—and for me, the film’s most interesting scene—comes when O’Brien talks with a group of Vietnam veterans. It’s an informal gathering rather than a speech. Asked by one vet what he thought when President Carter allowed Americans who’d moved to Canada to avoid the draft to return home, O’Brien knows he’s being asked for a denunciation and he doesn’t take the bait. He says he was almost one of the draft dodgers himself (the subject of an extraordinary chapter in The Things They Carried) and this leads into a discussion that makes it clear how much he differs from many of these Vietnam vets.

They’re still smarting that they received reproachful stares rather than parades and celebrations when they returned home. This is ancient history now, the resentments over not being appreciated when they thought they were serving their country, and O’Brien is clearly sick of their “Vietnam victimization.” But he was different from them to begin with. He thought the war was wrong before he went and became even more convinced of that while there. Much of his writing comes from the lack of “rectitude” he sees in the whole enterprise, a revulsion conveying his conviction that “America betrayed itself” even as it begs a crucial question: Would O’Brien have been better off joining the antiwar movement, going to jail or Canada rather than participating in a colossal crime?

Another question: Was it total coincidence that O’Brien’s deviation from writing into fatherhood roughly coincided with America’s invasion of Iraq, another, very different instance where deadly force and misguided leadership vanquished morality? It almost seems that the public’s acquiescence in—and even jingoistic enthusiasm for—the latter tragic misadventure reflected an America crucially changed since the great public furor over Vietnam, leaving O’Brien deprived of an older moral framework. Now he makes speeches decrying the horrors of war, and afterwards young men come tell him he’s inspired them to join the military.

Just as morality looms over the film, so does mortality. O’Brien’s experience in Vietnam was conditioned by the up-close deaths of friends and enemies and the constant threat of his own. Now he’s under threat again, and only partly due to age. His sons know he’s much older than their friends’ parents and worry out loud that he may die before they grow up. But age is something he can’t do anything about; that’s not true of smoking two packs a day. 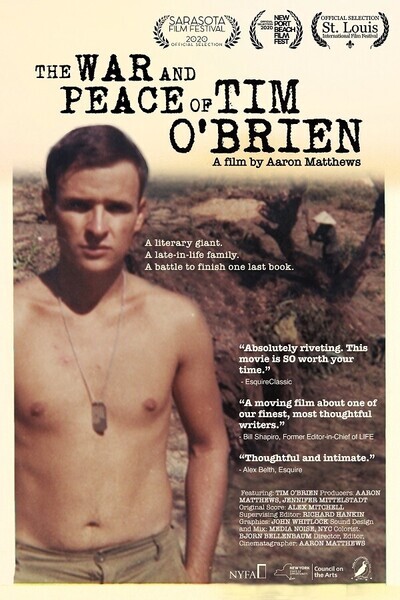