There is value in big ideas, and “The Wanting Mare” is full of them. Nicholas Ashe Bateman’s debut is a cornucopia of gorgeous locations and beautifully lit figures, their lonely majesty interrupted every so often by lengthy speeches about dreams and the desire to break free. The film weaves together myriad fantastical elements: a dream passed down through matriarchal generations; oppositional cities trapped in different climes; fissures of crime and bloodshed that further tear apart an already-desperate city. There’s a grand quality to this lore, and a magical appeal to its imagery. But the failure of “The Wanting Mare” is in how superficial its world building is, and how unexplored its greatest questions remain. Technically, the film’s use of visual effects is unquestionably impressive, but all that CGI is in service of a narrative so underdeveloped that its 88-minute run-time sometimes feels like an eternity.

“The Wanting Mare” takes place in an unspecified future date in the world of Anmaere, where the two cities of Whithren and Levithen are tied together. Whithren, in the north, is perpetually boiling and wrapped nearly constantly in a hazy smog, its city full of dilapidated old buildings and its northern shoreline rugged and rocky. Wild horses who live along the coast are a valuable export, and once each year are exported to Levithen in the south. Levithen is in perpetual snow and ice, but for the always-sweaty citizens of Whithren, it seems like a paradise. Tickets to travel from Whithren to Levithen on the transport ship that carries the horses are exceedingly scarce, but in extreme demand—and murdering for them is an everyday occurrence.

In this strange place, a baby is born: a daughter whose mother whispers to her about a dream she’ll have every night of “the world before.” “The dream is what’s left,” her mother says before dying in a pool of blood, and then “The Wanting Mare” jumps forward. Moira (Ashleigh Nutt) is now a young woman, living alone in a wooden house high up in a grassy field overlooking the ocean, and every night she travels into Whithren proper for a mysterious reason. On one of those nights, she crosses paths with a wounded thief, Lawrence (Bateman himself), whom she takes back to her home and helps nurse back to health. The bond that grows between them then sprawls outward, drawing in various characters as the narrative moves through different places and times.

Hadeon (Edmond Cofie), the respected leader of a local gang well-known for their proficiency in stealing tickets to Levithen. Eirah (Yasamin Keshtkar), a young woman trying to hide the horse she’s captured and is hoping to leverage as a way out of Whithren. A baby found abandoned at the water’s edge, a man living in a maze of shipping containers he’s fashioned into a kind of compound, a woman dancing in a glow of blue light. “The Wanting Mare” often employs a narrow range of focus to give these individuals starkness and singularity, while their backgrounds (a neon pink sun, the glowing lights of Levithen in the distance, the cliffs that encircle Whithren) are just blurry enough to engage our imaginations. Individually, these often dialogue-less scenes get by on the strength of their composition, and they should. Bateman and his team spent five years filming nearly everything that occurs in “The Wanting Mare” in a New Jersey warehouse and then crafting extremely detailed digital backgrounds and visual effects, more than 500 of them, to create Anmaere. The technical mastery required to pull this off isn’t in question.

The result, though, is that sometimes “The Wanting Mare” doesn’t feel very much like a film at all. Not to get too strict on what constitutes “cinema” in this day and age, but “The Wanting Mare” is so enamored with its own mythos that it prioritizes ambitious iconography over immersive narrative. This is a tone poem to the nth degree, and its haziness is increasingly a distraction. With such little dialogue, there’s no sense of who these characters are, how they’ve survived in this place, or what they aim to achieve by escaping it. The time jumps only underscore how little we know about anyone onscreen, and the expanding cast underserves the characters already underdeveloped. And the horses, seemingly central to this world’s cultural traditions, are barely seen. A movie named “The Wanting Mare” needs more equines than just one! This all feels like opacity for opacity’s sake—or, worse, for the sake of building an interconnected world, as Bateman hopes to do with future projects about Anmaere—and that’s no excuse for failing to deliver a film that has the strength to stand on its own.

“Do you wonder what was before?” one character asks another in “The Wanting Mare,” and that one line captures so much that the film frustratingly leaves unsaid. Abstraction can serve a purpose, but broad obfuscation shouldn’t be it. “The Wanting Mare” is gorgeous but hollow, as gauzily intangible as the film’s reliance on dreams. 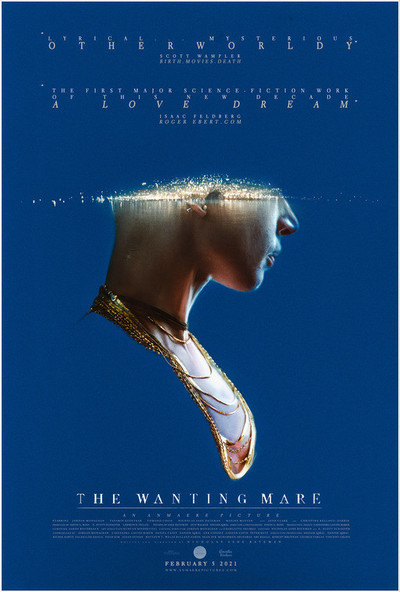