Time runs out in carefully marked units in the mainland Chinese sci-fi disaster pic “The Wandering Earth II,” a sturdy prequel to the record-smashing adaptation of Liu Cixin’s novel. In “The Wandering Earth II,” the apocalyptic problems faced by this movie’s Chinese characters—along with their international peers from the United Earth Government (UEG)—have already happened. Because in “The Wandering Earth,” the planet has already left its orbit thanks to some high-powered rocket engines, which have pushed the Earth out of harm’s way (aka a crash course with the Sun). Set in the near-future—a range of dates that includes 2044, 2058, and 2065—“The Wandering Earth II” follows China’s men and women of action as they lead the planet out of the solar system and into the previous movie.

Both “The Wandering Earth” and its sequel are flashy, state-approved cornball spectacles about humanity’s resilience (especially the Chinese). Both movies were produced with gargantuan budgets that would make even James Cameron blink, and they both look fantastic thanks to director Frant Gwo’s eye for panoramic scope and paperback cover-worthy details. The main difference between these two blockbusters is that the protagonists of “The Wandering Earth II” must repeatedly choose to be hopeful despite perpetually impending disasters, each one of which is neatly labeled and foregrounded with pulpy on-screen text like “The Lunar Crisis in 12 hours” and “Nuclear explosion in 3 hours.”

In this way, Gwo (“The Sacrifice”) and his five credited co-writers succeed in refocusing our attention on scenes of ticking-clock suspense, sandwiched between syrupy—and mostly satisfying—melodramatic interludes, where square-jawed astronauts and UEG diplomats struggle to do what we know is a foregone conclusion.

Most of “The Wandering Earth II” follows the superhuman efforts needed to jumpstart the Moving Mountain Project, the mission to first build and then deploy the globe-shifting engines needed to push the Earth out of harm’s way. The UEG’s Chinese delegation, led by the paternal diplomat Zhezhi Zhou (Li Xuejian), recommends prioritizing the Moving Mountain Project instead of the Digital Life Project. This radical initiative would transfer human participants’ consciousnesses into artificially intelligent computer programs. Some Digital Life supporters try to sabotage the Moving Mountain Project, including a deadly attack on the Space Elevator transportation ships that send UEG representatives from the Earth to the Moon.

Nobody living through the events of “The Wandering Earth II” knows what we know: That the Moving Mountain project succeeds and eventually becomes the Wandering Earth project, which comes under threat by a HAL 9000-esque artificial intelligence (A.I.) named MOSS in the first film. Still, multiple scientists, government officials, and space adventurers—mostly Chinese—believe in their work’s vital necessity, whether they’re punching out saboteurs or detonating one of a couple hundred nuclear devices scattered around the moon. There’s a lot of hand-wringing and teeth-gnashing along the way, mostly from English and Russian-speaking UEG members, all of whom speak in stilted, poorly dubbed dialogue. But Chinese astronauts, like “The Wandering Earth” co-leads Liu Peiqiang (“Wolf Warrior 2” star Wu Jing) and Han Duoduo (Wang Zhi), always prove Zhou’s slogan-simple maxim: “In times of crisis, unity above all.”

Some melancholic (and occasionally maudlin) flashbacks and dialogue emphasize the personal motives of one-note characters who, in the movie’s best scenes, are just parts of a beautiful post-human landscape. Liu remembers his wife and young daughter while melancholic scientist Tu Hengyu (Andy Lau) talks with his dead child after he uploads her personality into an experimental A.I. program; she cries a lot and sometimes responds with existentially troubling questions like, “Where am I, daddy? I want to get out.” We’re then periodically reminded of the next impending crisis—“the moon disintegrates in 50 hours”—in between solar storms and nuclear explosions. Somehow, “The Wandering Earth II” never feels tonally unbalanced or narratively convoluted, partly because Gwo and his collaborators keep their movie’s plot focused on feats of action-adventure heroism.

“The Wandering Earth II” only seems relatively unambitious because it’s more focused on sap-happy human emotions than on dystopian intrigue. Both movies are still essentially showcases for beautiful and expensive-looking computer graphics. But “The Wandering Earth II”—a brittle and, at heart, old-fashioned space opera—would be insufferable if Gwo and his ensemble cast members didn’t sell you on the possibility that someday, people who are as selfless, monomaniacal, and capable as Liu and Tu could exist.

“The Wandering Earth II” is also like “The Wandering Earth” because it’s just the right mix of silly and somber. Hurt, scared people wonder about the recent past, but always from a rare position of forward-thinking emotional clarity. (“She’s dead, and that’s it. That’s the reality.”) So when humanity must inevitably save the day, their accomplishments are appropriately surreal and awesome. 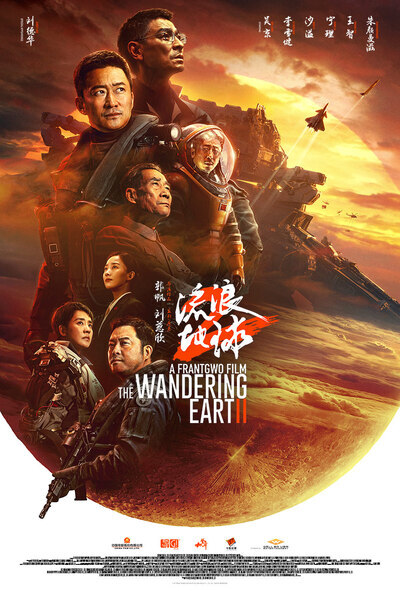