When “The Intouchables” came out in 2011, it was a massive hit in its native France. The crowd-pleasing comedy, based on the true story of a white, wealthy quadriplegic and the black ex-con who became his unlikely caregiver and friend, burst all kinds of box-office records. It was clear watching it back then that someone, someday would take that movie, remake it in English, populate it with Hollywood stars and cash in on this feel-good tale all over again.

That day has come. The movie is “The Upside.” And as you’d probably expect—or at least as I expected—it’s a hollow replica of its source material.

Director Neil Burger (“Limitless,” “Divergent”) has recreated specific scenes, images and jokes from the original, but never manages to conjure the same sly charm as “Intouchables” writers and directors Olivier Nakache and Eric Toledano did. A Hitler joke that seemed daring the first time around falls flat here, for example. Bryan Cranston and Kevin Hart give it their all in taking over the roles Francois Cluzet and the hugely charismatic Omar Sy inhabited, but they never enjoy the same sort of chemistry (or any at all, for that matter). And while the film runs just over two hours—and Cranston and Hart are on screen for nearly all of that time—their characters are little more than facile concepts, tethered to antiquated and uncomfortable clichés about race relations.

Calling Burger’s direction workmanlike would be a kind understatement. Working from a script by Jon Hartmere, Burger’s whole endeavor feels like it’s on autopilot, like it was crafted through a paint-by-numbers kit. There’s a scene in which Hart and Cranston’s characters smoke pot together as a means of bonding and healing—yes, this is the level of originality on display here—but it’s as if the entire movie is mired in a sluggish, drug-induced haze. There’s no drive, no momentum, just some standard-issue socioeconomic clashes, followed by trite life lessons.

Hart co-stars as a streetwise New Yorker named Dell, who’s out on parole after doing time for a variety of crimes and in need of a job. At least, he needs to prove he’s been looking for a job by collecting signatures from potential employers. While half-heartedly going about this process, he stumbles into an elevator that takes him to the Park Avenue penthouse of multimillionaire businessman Phillip (Cranston), who’s in a wheelchair after a hang-gliding accident and seeking 24-hour care. Dell clearly isn’t qualified for the job, but Phillip likes his edge and attitude compared to the more polite, suitable applicants he’s seen and hires him on the spot.

What follows is an uninspired series of fish-out-of-water situations in which Dell reacts with shock and confusion to things like opera and modern art. Meanwhile, Phillip is aghast at Dell’s efforts to expose him to R&B music and racy humor. In time, however—spoiler alert!—Dell will learn to appreciate the finer things in life, while Phillip will learn to loosen up. (Say what you will about the overly simplistic “Green Book,” at least it reversed the racial roles within this hackneyed scenario.) The qualities that make both of these actors appealing—Hart’s kinetic energy, Cranston’s sly wit—have been tamped down until they’re flattened, then mushed into a bland paste.

Stuck in the middle of all these would-be wacky shenanigans is a woefully underused Nicole Kidman as Phillip’s uptight and disapproving executive assistant, who has her eye on that naughty Dell and constantly looks for reasons to fire him. Kidman is afforded exactly one note here, and the fact that even she can find no nuance in this character is evidence of how poorly everyone is written. Similarly, Julianna Margulies feels like an afterthought in a half-baked subplot as a possible love interest for Phillip. And Aja Naomi King gets little more to than nag as Dell’s neglected ex and the mother of his studious tween son (Jahi Di’Allo Winston).

The only upside is that this will probably be just a blip in retrospect for everyone involved. 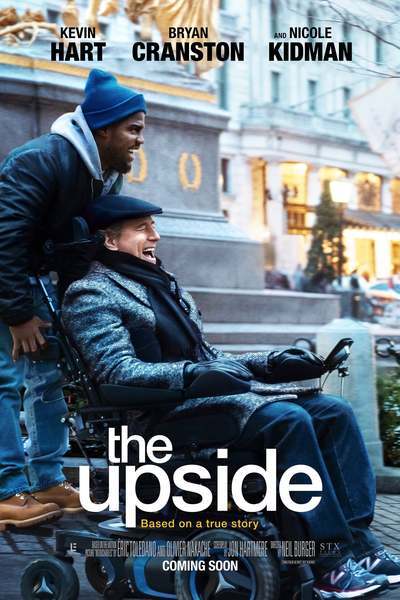 Writer (based on the motion picture "Les Intouchables" by)