It’s sometimes hard to stomach the Italio-Greek foodie doc “The Truffle Hunters,” a compelling but generally patronizing slice-of-life portrait of the title characters, a reclusive group of foragers, all in their 70s and 80s, who find and sell truffles from the forests of Piedmont, Italy.

To be fair: these men sometimes appear to be a little … well, out there. They closely guard their favorite truffle-hunting spots, and talk about their profession in equally standoffish terms. The Piedmont truffle hunters also spend a lot of time outdoors with only their fungi-hunting dogs for company, so they’re not the most socially well-adjusted bunch.

As you might imagine, the world of “The Truffle Hunters” isn’t exactly inclusive, which means its inherent absurdity is easy to over-stress. Thankfully, there are hints of the Piedmont gang’s personalities sprinkled throughout co-writer/director Michael Dweck and Gregory Kershaw’s non-fic character study.

The makers of “The Truffle Hunters” announce their above-it-all perspective in their opening scene: a Bruegel-esque landscape shot of a steep hill, covered in yellowing leaves, skeletal branches, and drooping moss. A human figure, with dog, emerges from the bottom left of the frame as the camera slowly zooms in. It’s quiet, except for some ambient noises and the man’s careful footsteps.

As the movie progresses, this character’s search for truffles seems less contemplative, and more like an active pursuit. There’s even an endearingly loopy scene where one of the hunters’ dogs is let loose after its fitted with a Go-Pro-like handheld digital camera. Seeing events from this happy hunter’s point-of-view isn’t exactly revealing, even if their infectious excitement does make it easier to see why these Piedmont guys do what they do. Truffle-hunting, being a highly specialized field of work, isn’t just a meditative process: it can also be thrilling, earthy, and more than a little enchanting. At least, that’s how it seems, when considered in the abstract. Landscape photography is nice, but it only tells you so much.

The same is true of dialogue and interior scenes whose mannered camerawork suggests that, on some level, Dweck and Kershaw want to remind viewers that they know how proud their subjects often seem. Dweck and Kershaw never identify their subjects by name on-screen (though they’re sometimes called by name in conversation), which gives one the impression that the Piedmonters are meant to be seen as individual facets of a shared personality or environment. One man (Carlo) takes his time in adjusting his tie, sitting in front of a mirror that’s presented at an angle that ostentatiously emphasizes the religious icons and faded landscape photos behind him.

Another man (Aurelio), this one married, tramps through the woods with a cane and a dog, singing a ribald song to himself: "If you figure me out, my dear husband, I'll make it up to you!" We follow these two figures in a series of long, hyper-aestheticized takes, as they relive past glories and generally refuse to back down to anybody (not even his wife, Maria). These older guys know all there is to know about their business, so their behavior is sort of absurd, especially if you look at it from an outsider’s perspective.

Thankfully, Dweck and Kershaw also seem to like their characters (such as they are) enough to pick up on their individual quirks and hang-ups. I love almost every scene featuring Angelo, a 78-year-old farmer and poet with a wispy beard and a black beret who boasts about his past life as a womanizing acrobat. Angelo’s a consummate fish story salesman (“I enchanted them[…]I walked on stilts, that’s fascinating”), and watching him talk himself up is often a pleasure.

Angelo’s even funny when he’s the butt of the filmmakers’ (mostly affectionate) jokes, like when he’s trying to write a letter to an unspecified younger audience, and, with each sip of his wine, seems to take longer to make a point (any point). “We need to teach the youth,” he says. “We need to go back to 50 years ago.” Then he pauses to scan his keyboard for a moment, and resumes: “When to undress a woman, you had to take ten ... dresses and four petticoats off." The man’s 78 years old, but funny is funny.

I wish I could say the same thing about the scene where Angelo impatiently waves away smooth-talking (and relatively young) truffle seller Gianfranco. Or the scene where Carlo takes his time consuming an expensive-looking truffle dish, and, after a few long seconds of chewing pasta and listening to Enrico Caruso sing an aria from Tosca, he decides: “I like it. Very good." Thankfully, despite its creators’ general fussiness, “The Truffle Hunters” is good enough, if only because guys like Carlo and Angelo are more charming than they are eccentric. 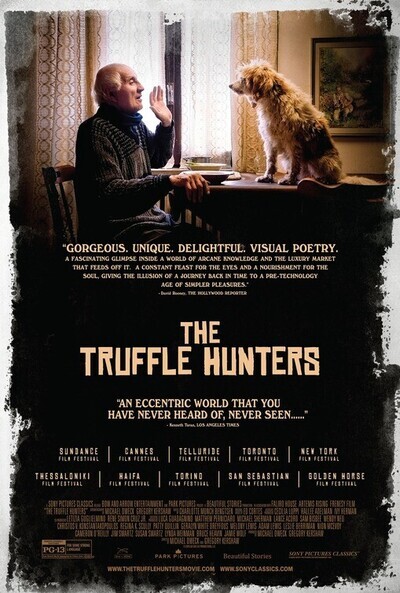 Rated PG-13 for some strong language.