The Treasure of His Youth

About 20 years ago, a young woman named Silvia di Paolo was digging around in the basement of her family’s home for skis when she stumbled upon a cache of over 250,000 photo negatives, prints, and slides. When she asked her father, Paolo, a professor of history and philosophy, about them, he was initially reluctant to discuss them. Eventually, he admitted that the photos—including shots of Pier Paolo Pasolini, Anna Magnani, Sophia Loren, Marcello Mastroianni, and other key figures of Italy’s post-war cultural renaissance—were taken by him during the period from the Fifties to the mid-Sixties when he was one of the country’s top photographers until he walked away from it all seemingly without reason. The story of his life and work is now chronicled in “The Treasure of His Youth: The Photographs of Paolo di Paolo,” a new documentary by filmmaker and renowned photographer Bruce Weber, who happened upon a couple of Paolo’s portraits while on a trip to Italy and became determined to learn more about this photographer he had never heard of.

Born in a small town in southern Italy, Paolo arrived in Rome after high school to study philosophy and classical literature. Although his artistic abilities initially leaned toward painting, he soon moved toward photography and its possibilities. He eventually worked for the publication Il Mondo and would become one of its most essential contributors over the next 14 years. And although his portraits of the cultural elite were undeniably striking, he was equally adept at using his camera to capture images of the lower classes struggling to rebuild in the aftermath of the war. He created shots that could tell stories on their own without the need for any text to convey the narratives.

The examples of his work that we see here remain striking to this day, making his decision to walk away from it even more baffling. Part of this decision was practical—Il Mondo, which had been his crucial outlet, went out of business—and part of it was philosophical—the other magazines and papers were relying more and more on the scandalous scoops of the increasingly prevalent paparazzi, a form of photojournalism he refused to partake in. He claims to have been entirely comfortable with the decision to abandon photography, but when someone demonstrates such prodigious talent in a particular artistic field, can they just turn it off like that? If so, can they turn it back on again? That latter question becomes important when a 2019 exhibition of Paolo’s work, spurred on by Silvia’s desire to reintroduce her father’s work to the world, leads to an offer for his first photography job in over a half-century, shooting a 2020 fashion show displaying the works of designer Pier Paolo Piccolini.

Not surprisingly, “The Treasure of His Youth,” which Weber shot in black-and-white to better correspond with Paolo’s imagery, is an uncommonly beautiful-looking documentary. It also has, in Paolo, a genial subject who conveys his experiences as a top photographer in a soft-spoken but always interesting manner. Unfortunately, however, the film makes two mistakes that keep it from completely working. For starters, I found myself wishing for a little more detail about Paolo’s working process—while it's easy to recognize the beauty of his work (and those last fashion show shots reveal that even at the age of 94, he had not lost his eye for composition and imagery), I would have liked to know more about what separates his method from that of others. Additionally, while it's clear he was happy with his decision to abandon the world of photography with such totality, I wish that Weber could have pressed him a little further regarding that decision and if it was truly as effortless as Paolo makes it out to be.

As a result, “The Treasure of His Youth” primarily serves as a warm-stop bath of nostalgia that allows one renowned photographer to pay tribute to the work of a knitted artistic spirit. On that level, I suppose the combination of the formal beauty on display and Weber’s obvious affection for his subject make it worth a look, especially for viewers who already have an interest in photography. If nothing else, the film may inspire them to go back and explore Paolo’s artistic legacy for themselves. 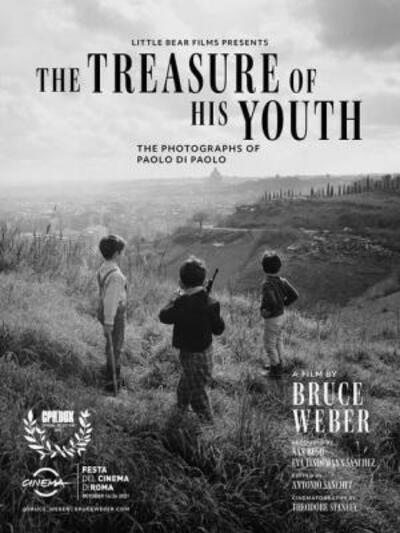 The Treasure of His Youth: The Photographs of Paolo Di Paolo (2022)

Paolo Di Paolo as Self - Photographer

Giuseppe Casetti as Self - Gallery Owner

Luca Stoppini as Self - Graphic Designer

Guido Stoppini as Self - Luca's Nephew

Matilde Caputo as Self - Silvia's Daughter

Leonardo Caputo as Self - Silvia's Son