Sometimes when we fear a loss of control it's reassuring to be in control of anything at all. In “The Tomorrow Man,” two lonely people “on the wrong side of 60” experience great loss and respond to the uncertainty around them in ways that have given them some comfort. But can they be willing to risk that sense of control for another kind of comfort that can also be terrifying? Will they take the risk of caring about each other?

Ed (John Lithgow) is by nature and profession a man of research, data, and order. Until he was laid off, he was a systems analyst at a ball bearing factory (“You have no idea how screwed up the world would be if not for ball bearings!”). Now he sits in a small makeshift command center in his home, posting as Captain Reality on a doomsday prepper message board. We first hear him lecturing his son Brian (Derek Cecil) on the phone about preparing for an impending apocalypse of some kind. Whatever it is, Ed knows exactly what will happen next, from the stores that will be out of food after three days, to the failure of phone and internet connections, to the inevitable invasion as soon as America is in a weakened state. “I’m not saying this to scare you,” he tells his son. “I just want you to be ready.”

But of course Ed is saying it to scare Brian. He wants Brian to be as scared as he is so he can feel closer to him and so he can comfort him, the way he did when he was a child.

Ed makes frequent trips to the grocery store to buy small quantities of items he's quietly stockpiling. It's there that he spots an attractive older woman named Ronnie (Blythe Danner). Like him, she shops frequently and even pays in cash. He thinks this means she's ahead of him in going off the grid, as he has given up credit cards but is still writing checks. Part of the movie's understated humor is that due to Ed’s prepper outlook, he assumes she must be one, too, and thus must recognize that he's a kindred spirit who would not be willing to discuss it beyond some veiled comments.

When Ed finally gets up the courage to invite Ronnie out, he pelts her with questions about her preferences for core prepper supplies like tuna and batteries. She does not know where this is coming from but does not consider it odd. She assumes it is the kind of question one might ask to get to know someone, like a Buzzfeed quiz about which “Game of Thrones” character you are. Ronnie is grateful for the companionship, and so is he. When one of the cheesiest pop songs ever written comes on the radio, he bolts from the driver’s seat out into an empty field because he is just so overcome with combined yearning and fear.

In some ways, dating is easier once you've moved past some of the issues that get younger couples into trouble. There’s no need to agree on in-laws or children or money or where to live or the complications of work life. If all you're looking for is someone to care for and to be cared about, at a time in life when you truly understand how precious that is and how little time is left, things can move pretty quickly. Soon Ed is calling Ronnie his girlfriend, and bringing her to his family’s Thanksgiving dinner, which becomes riotously dysfunctional. Seeing the chaos in Ed’s meticulously organized, systems analysis life lets Ronnie begin to share some of her own. For both of them, the issue then becomes more than companionship. Can they take on the risks of intimacy? Can the man who thinks he can control the future take time to appreciate what's in front of him? Can the woman who thinks she feels stronger by withholding learn to let go?

The actors bring a great deal of humanity to keep a wobbly script from going too far off balance. The excellent supporting cast includes Eve Harlow as Ronnie’s young boss, who enjoys the chance to give Ronnie some advice on dating, Cecil as Ed’s son, who wants his father to pay attention to him for something more than prepping, and Sophie Thatcher as Ed’s granddaughter, whose strained relationship with her parents parallels what is going on between Ed and Brian. Lithgow and Danner show us characters who may qualify for Medicare but are every bit as vulnerable and as eager to matter to someone as middle schoolers at their first mixer. 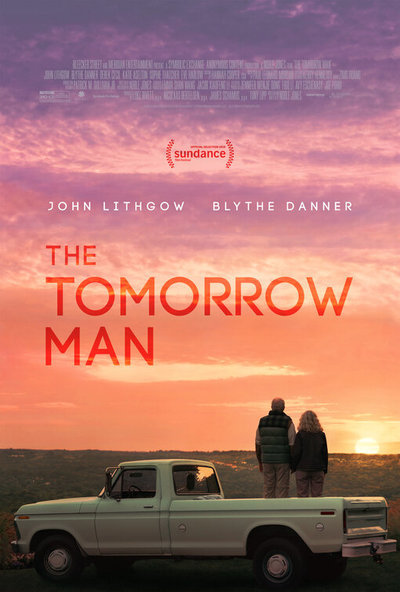 Rated PG-13 for brief strong language and some suggestive material.