“The Tenth Man” has the set-up of a homecoming tale, with a few immediate quirks. It follows Ariel, an Argentinian man living in NYC who is flying home to Buenos Aires, Argentina to see his father, Usher, and introduce him to his wife, a dancer named Monica. But from the very beginning, nothing goes according to plan: Monica can't join him in Argentina for a few days and Ariel can't find some random Velcro shoes that Usher has requested. Worst of all, when Ariel gets to Bueno Aires, Usher is merely a voice on the phone, telling him day-after-day that he'll be there soon.

Back in the place he grew up, a volunteer community known as The Foundation that his father leads, Ariel does a little recharging as he gets sucked into Usher's business. The Foundation runs like a bazaar of volunteers, frantic voices piled on top of each other, trying to help different members of their Jewish community. Ariel quickly finds himself running errands, along with a mute woman named Eva (Julieta Zylberberg) that his father is essentially setting him up with.

"The Tenth Man" could be categorized as "manipulation comedy" of sorts, as Ariel moves from one errand/favor (deliver shoes to bedridden man at the hospital) to the next (collect leftover pills from a recently deceased member of the Foundation). As Ariel gets deeper into the Foundation's going-ons and becomes a type of leader himself, Burman keeps the story focused by going day by day. But the movie feels hollow in spite of its busy nature and relative focus. The omnipotence of Usher is a more distinct element, but he's a mere voice on the phone with vague promises and direct requests for his son. Much of this is to be taken, I think, as a funny course of events with muffled quirkiness.

Sabbagh and Zylberberg struggle to make interesting characters to hook into, even as the two drastically change throughout the course of the story. They’re both muted performances; he with his blank expressions coming from tired eyes, and her with a literal lack of words. But without great comedy or even striking moments, they only contribute to Burman’s progressively monotonous tone.

"The Tenth Man" gets most curious, especially for those of us unfamiliar with the Jewish-Argentinian community, as Ariel steps into the customs of his faith, the spur being a pursuit of Eva into a synagogue. Often featuring Ariel on the phone talking to the off-screen Usher or Monica, the film can be too drab visually, but at least has some cultural offerings at its midpoint. Burman's movie lacks so much tone that education becomes its biggest appeal, observing customs like the Teffillin, or exploring why, in Ariel's words, that ten people are seemingly needed to do anything in the Jewish religion. The film has a climax of sorts at a Purim ceremony as well, which provides an extended scene of community, although Ariel's placement in it proves yet again to be the very least interesting component.

Burman's film languishes on the chaos of the events, and it can never be accused of not having some ideas about fatherhood and legacy. But the humor of this rambling film runs dry to the point of unpalatable. 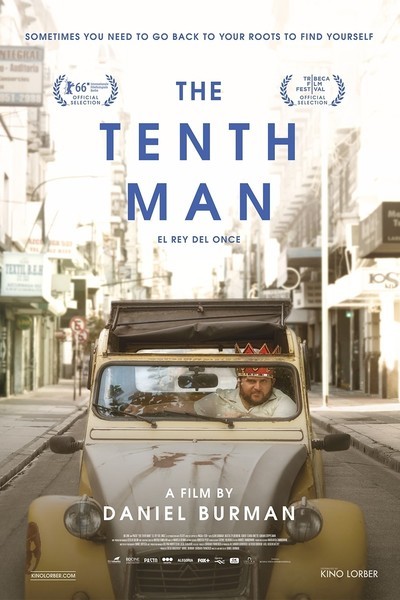