It’s 2011 in a suburb outside of the city of Damascus, Syria. Two sisters are playing in the middle of an idyllic pool scene. People of all ages splash around them or dive below the water’s aqua surface. The sun is out, there’s pop music in the background. Surrounded by mountains and the occasional sprinkling of palm trees, you might have mistaken this moment for somewhere in California. There’s a painful sense of normalcy to this sequence, knowing what will happen to Syria in the next few years.

This mundane beginning of “The Swimmers” soon moves forward in time to 2015. The girls, Yusra (Nathalie Issa) and Sara (Manal Issa) are older now. The two are torn between wanting to enjoy their youth in the face of death and destruction and focusing on their swimming careers. When their country’s war can no longer be ignored, they decide to brave the treacherous migration to Europe, as millions of fellow refugees have done. Then, despite all odds, Yusra continues to fight for her dream of swimming at the Olympics.

Based on the true story of Yusra and Sara Mardini, Sally El Hosaini’s “The Swimmers” is a touching portrait of their fight to survive and achieve the impossible. The script co-written by El Hosaini and Jack Thorne does not soften the danger or hardships the sisters faced on their trek to Germany, yet it keeps its central characters grounded in hope and reality. The two sisters argue, make mistakes, and are too hard on themselves, but that’s part of what makes their story so compelling. They were regular teenagers thrown into extraordinary circumstances.

While mostly focused on the young women’s journey, “The Swimmers” occasionally widens the scope of its emotional personal story to observe the wider humanitarian crisis facing migrants to this day. The young women find safety with fellow travelers but are misled or abused by smugglers, sleep in cramped living quarters overwhelmed with new arrivals, and face bureaucratic red tape when trying to reunite with their family left behind in Syria.

With the lens of cinematographer Christopher Ross, El Hosaini visualizes the plight of refugees in moments like when the sisters arrive on a Greek island frequented by countless refugees before them, they walk through a valley of discarded brightly colored lifejackets. The camera looks down at the sea of lifejackets as a hint of how much larger this crisis has become. In another scene, the sisters crash a beach resort by pretending to dress and act like Europeans so they can sneak by unsuspecting staff and visitors to take a shower. The oblivious beachgoers are clueless about the refugee encampment just a short walk away. They’re having the kind of sunny day the young women once enjoyed back home, and Ross echoes the style of that opening sequence to illustrate what the sisters have lost in the Syrian Civil War.

Like their characters Yusra and Sara, Nathalie and Manal Issa are sisters in real life, adding depth to their on-screen dynamic. There’s a shared history between the two—a sense of past trusts, betrayals, and reconciliations behind their body language and tone. Their dialogue scenes run from caring and supportive to outright combative, marking a parallel emotional journey alongside their physical one.

While the sisterly bond takes center stage, the supporting cast reveals more about the main characters. Their tough but loving father and coach Essat (Ali Suliman) and doting mother Mervat (Kinda Alloush) establish the loving home the young women are leaving behind and their absence in the sisters’ life on the road is deeply felt. Their cousin Nizar (Ahmed Malek) joins the two sisters in their migration and through his inexperience and outgoing performance reminds the audience how young many refugees are—Yusra, the younger sister, is just 17 years old when they leave Syria. Once in Germany after their death-defying ordeal, Yusra’s swim coach, Sven (Matthias Schweighöfer), complements her father’s earlier tough love lessons with a new one: learning to forgive herself. He shows a kindness that’s largely missing from the film after the sisters left home and he signals the start of a new chapter in their lives.

El Hosaini’s retelling of the Mardini sisters’ story is a moving tribute to them, to the millions of refugees who risked everything to uproot themselves to safety, and a reminder that many of their stories are still ongoing. It’s the kind of inspirational sports movie that’s about more than just the athlete or the big game. "The Swimmers" is about a cause much bigger than the Olympics and is told on a personal scale that makes the issue accessible and unforgettable. 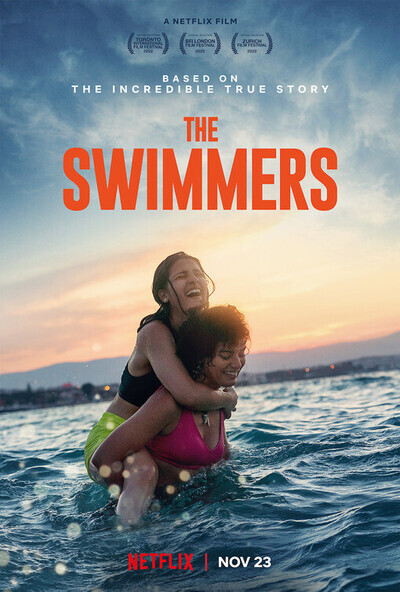 Rated PG-13 for thematic material, some violence including sexual assault, and language.