A funny thing might happen to you while watching this film. Its story, of a photographer pursuing a legendary and legendarily reclusive mountain climber as he prepares to try and scale the south side of Everest, may prove sufficiently compelling that you’ll believe you’re watching a documentary. That would be quite an achievement for any dramatic film, but in this case it would be even more so. Because “The Summit of the Gods,” directed by Patrick Imbert, adapting a manga by Jirô Taniguchi and Baku Yumemakura, is an animated movie.

The picture’s art direction isn’t all that elaborate, and the animation, while solid and realistic, doesn’t present as all that value-added. And although almost all the movie’s characters are Japanese, the dialogue is in French. (With English subtitles of course; Netflix also offers an English-dubbed option.) But the movie’s narrative, its steady-rolling conviction, and its insights into the minds of obsessive climbers give it a remarkable pull.

The tale is narrated by Makoto Fukamachi, a magazine photographer who’s disgusted with the poor shots he got during an abortive Everest climb. At a bar, he’s approached by a strange man with an old camera. A camera, he says, that was used on a long-ago attempt to top Everest. A real-life one, as it happens, attempted by George Mallory and Andrew Irvine in 1924, decades before anyone succeeded in getting to the summit.

Fukamachi dismisses the peddler but regrets it almost immediately. He connects the man with the camera to another climber (this one fictional), Habu Joji, who seems to have disappeared from the climbing scene after establishing his legend, and nearly losing his life in an avalanche.

So the movie sets up a potential nesting-egg narrative, with Mallory and Irvine in the outer layer, Habu Joji in the middle, etc. That’s not what the movie delivers—the 1924 expedition is not the main concern of “Summit.” Fukamachi’s pursuit of Joji is, and it pays off. After recounting various feats of irrational daring undertaken by the climber—including a hair-raising ascent up something called the “Demon Wall”—Fukamachi catches up with the mountain man and is, predictably, rebuffed. The photographer tells the climber that his achievement—if it is indeed achieved—will mean less if there’s no chronicle of it. Joji eventually agrees to take Fukamachi along, provided the photographer doesn’t interfere with the climber.

Does Joji give in because he buys Fukamachi’s pitch? It’s clear that he doesn’t. Long years have taught Joji what he may have sensed all along: that the doing is all. Climbing is when he “feels most alive,” and that’s enough.

Fukamachi, who of course has some experience in the field, finds himself tested as he’s never been. Among other things, he learns that hypothermia is a red condition rather than an ice-blue one. It’s in the climbing sequences that the movie’s animation is at its most imaginative, creating effects both exhilarating and harrowing.

Now playing in theaters and available on Netflix on November 30. 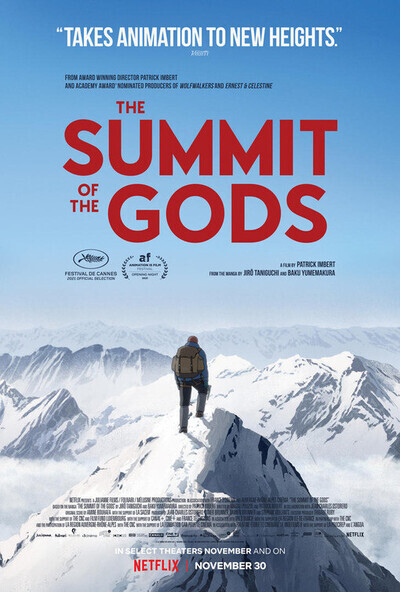